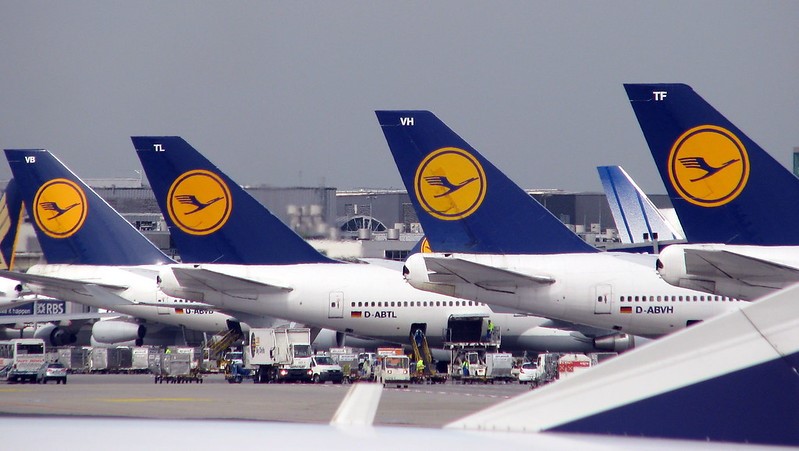 Airlines trade association Iata has urged the UN body responsible for aviation to weaken the baseline from which the sector has to start offsetting emissions from next year after air travel collapsed. (Photo: Tearbringer/Flickr)

Airlines are putting pressure on the UN to make it easier for them to curb emissions in the 2020s as the industry reels from the collapse of air travel because of the coronavirus.

The International Air Transport Association (Iata), which represents the world’s airlines, said it wanted to change the baselines from which traffic growth will be judged in coming years to pre-pandemic levels in 2019.

It said it wanted  to “avoid an inappropriate economic burden on the sector” by dropping a planned baseline of average emissions in 2019-2020 that is likely to be much lower than 2019 since many flights are now grounded.

As part of efforts to curb the aviation sector’s growing emissions, countries that are members to the International Civil Aviation Organisation (Icao) – the UN body responsible for aviation – have agreed an “aspirational goal” to make all growth in international flights carbon neutral after 2020, compared to both 2019 and 2020.

Under the existing plan, countries have agreed to use a market-based offset mechanism known as Corsia. But the public health crisis and collapse of air travel means emissions from aviation are anticipated to fall this year.

A lower 2019-2020 baseline than initially expected would toughen airlines’ goals for curbing emissions growth and force companies to buy a lot more offsets to meet the sector’s climate target when traffic rebounds.

In a position paper, Iata said use of the two-year average could result in “significantly higher offsetting requirements and costs for operators further down the line”.

Iata called on the Icao’s council, the organisation’s governing body, to adjust Corsia’s baseline to 2019.

The trade group said using only 2019 would “preserve the environmental benefits” of Corsia as it “would remain more stringent” than the anticipated baseline, had the coronavirus crisis not happened and airlines’ emissions continued to grow in 2020.

It urged the council to make a decision on the issue before the end of June.

Corsia was agreed in 2016 and a review of the scheme was not expected before 2022.

The trade group’s call for Icao to review Corsia’s implementation comes after China – which has one of the world’s fastest growing air passenger markets – also called for the baseline to be adjusted during a meeting of Icao’s council last month.

The move also comes as the aviation industry is urging governments to provide it with economic relief as the pandemic stalled global travel. The US approved a near $60 billion bailout package for the industry last month.

However, adjusting the baseline would require political approval by other Icao members.

Bas Eickhout, a Green MEP and vice-chair of the European Parliament’s environment committee, told Climate Home News Corsia was already “extremely weak” and “won’t bring the aviation sector anywhere near to what is needed to tackle climate change”.

He added that while a lower baseline will force airlines to buy more credits, the credits were “very cheap” at a “couple of euros per tonne of CO2”.

“I don’t see the need for any adjustments now. I trust the EU won’t either,” Eickhout said, adding that any Corsia review would ideally make the baseline stricter, not weaker.

Corsia is due to come into force in January 2021 but will be voluntary for the first six years. That means only flights between countries which have volunteered to participate in the scheme will have to compensate for the growth in their emissions.

From 2027, offsetting obligations will become mandatory for all international flights.

Iata, which championed Corsia, said it was concerned that countries may be less willing to take part in the voluntary pilot phase if the scheme’s costs were higher than initially forecast.

“Current volunteers may reconsider their earlier decisions in order to safeguard the interest of their national air transport system and its connectivity,” it added.

But observers of UN aviation talks and campaigners say that while a lower baseline would impose greater offsetting requirements on airlines, built-in flexibility provisions could reduce the pandemic’s impact and limit additional financial costs.

Gilles Dufrasne, policy officer at Carbon Market Watch, told CHN the calculation of the baseline using a two-year average was designed to “avoid the impact of an exceptional year”.

“If things had gone the other way, and 2020 was a year of high traffic, we would not be having this discussion,” he said.

“Corsia was due to have next to no impact financially on airlines…. That airlines may have to buy a few million more offsets, industry wide, across three years, is really of no consequence,” he added, accusing Iata of attempting to “stave off more effective government regulation”.

For Tim Johnson, director of the Aviation Environment Federation, “given the need for Icao and industry to align aviation’s climate goals with the Paris Agreement, retaining 2020 as the baseline could turn out to be a positive step forward for climate ambition”.