UK holds ‘citizens’ assembly’ to seek ideas for cutting emissions to net-0 by 2050. But some participants doubt the government will listen 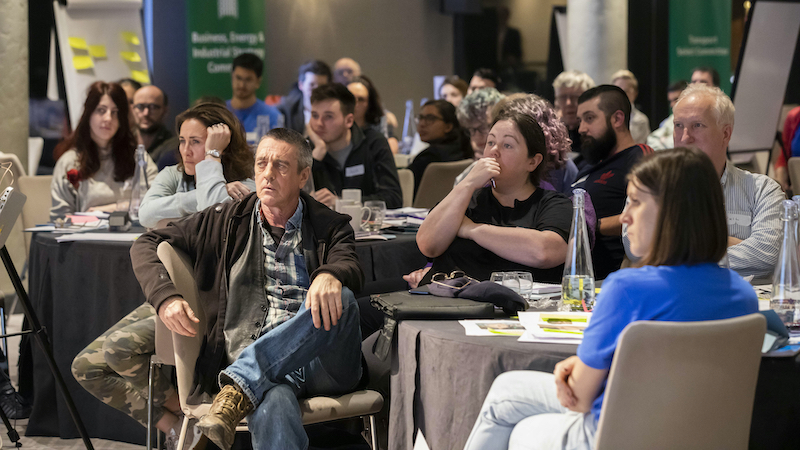 People in the UK should buy less, rent more and repair possessions such as fraying clothes or ageing bicycles to help achieve a goal of net zero emissions by 2050, academics told a “citizens’ assembly” on climate change.

At a meeting in Birmingham on 8 February, 110 sometimes sceptical citizens were consulted about ways to decarbonise the UK economy as part of preparations by Prime Minister Boris Johnson’s government for the Cop26 summit in Glasgow in November.

France launched a similar democratic experiment in October to seek voters’ ideas for cutting emissions. Last year, the UK was the first G7 economy to legislate a goal of net zero emissions by 2050 but it did not spell out exactly how.

Buy less new stuff, rent everything from toys to cars, and repair damaged possessions were among topics debated at the Birmingham meeting.

“The more we consume, the quicker we run out of natural resources,” Nicole Koenig-Lewis, a reader in sustainable consumption at Cardiff University, told the room.

“Thinking about resources like fossil fuels or minerals: it always leads to an increase pollution of our water and the air and also too much waste. Thinking about the fashion industry, 300,000 tonnes of clothing are sent to landfill every year,” she said.

Many in the audience said they got the message although others doubted the government would heed their ideas.

“It’s a big issue for my generation,” Leia, a currently unemployed 20-year old engineer from Darlington, told Climate Home News of a throwaway society. Reporters were asked only to use participants’ first names.

“We’ve never been taught to mend or make clothes. I have but I know I’m the exception, so we need to educate young generations how to do these things rather than just live a consumerist lifestyle,” she said.

Participants in the Birmingham citizens’ assembly, the second of four weekends devoted to consulting the public, were recruited through a civic lottery, under which the government sent 30,000 invitations and randomly picked 110 people out of those willing to take part.

The attendees reflect the UK population in terms of age, gender, education, ethnicity, geography and attitudes to climate change, according to Resolve, a charity specialising in participative democracy overseeing the climate assembly.

The outcome of the discussions will be presented to the six parliamentary committees which called for the assembly in April. The government will not be bound by the recommendations, prompting Extinction Rebellion UK to call out the assembly as “toothless”.

By contrast in France, President Emmanuel Macron has said he plans to present citizens’ proposals “unfiltered” either to a referendum, to a vote in parliament or to direct regulatory application.

One million solar panels! If only we knew where they were…

In Birmingham, one audience member won a round of applause by asking Rachel Reeves, the chair of parliament’s Business, Energy and Industrial Strategy Committee: “How can we be reassured that the government will follow on our recommendations?”

Reeves, of the opposition Labour Party, insisted that the assemblies were genuine.

“We can have a degree of reassurance that the government are going to listen and take on board the views of the citizens’ assembly,” she said, pointing to cross-party support. “We’re going to use what you come up with to inform our future work programme.”

Participants broke out into several groups in an afternoon session, each tackling ways to decarbonise an area of the UK economy, including energy in the home, transport and consumption.

In the workshop on consumption, lectures challenged the notion that greater energy efficiency in the future would allow British people to get away with present-rate consumption.

A net-zero economy would also have to encourage less waste, higher-quality and more durable products than those produced at present in a shift from a throwaway consumer culture.

“Is the new iPhone, which has a new form of selfie, adding enormous amount of value to our life?,” asked John Barrett, a professor in energy and climate policy at the university of Leeds.

“It isn’t about personal blame. This is about a system that we work in,” he said, sending several heads to nod in agreement. Some economists object that a shift to buying less will undermine growth and jobs.

Koenig-Lewis advocated a shift away from ownership and towards renting or sharing. Ride-sharing for commuters by car, clothes-sharing or product rental, such as the Lego subscription box, could allow British people to cut resource use in the long-term.

The participants, who were spread across five tables of six to seven people including a mediator, then had ten minutes to exchange views with experts in a session closed to the media.

Barrett reported upon the audience’s “annoyance” towards products’ lower standards and limited lifespan.

The idea of forcing companies to indicate their products’ carbon footprint was particularly popular, the experts said. Carbon footprint labelling is currently not compulsory in the UK, despite support from household names like Kit-Kat chocolates, Cheerios cereals and Nescafe coffee.

So was a graph linking emissions to income that showed the 5% richest section of the population have by far the greatest impact. “The reaction was a sense that they want to make sure that the polluter pays,” Barrett said.

On the sharing economy, Koenig-Lewis said participants wanted to discuss “how to  make a rented car feel more personal”.

There was also vivid interest in repairing initiatives, such as the rise of ‘repair cafes’, free meeting places where people can bring broken products such as clothes, bicycles, furniture, electrical appliances and, if necessary, learn how to fix them.

Notwithstanding the odd disagreement over subjects such as whether to restrict consumption of meat in favour of plant-based diets, participants provided overwhelmingly positive feedback on the experience in surveys.

Chris, a 32-year old mechanical engineer from Oxfordshire, admitted to being initially “very sceptical about the climate assembly”.

“I heard a lot of people say: we want a group of people, to represent the people, to make a decision for the people. And I thought: and is that not what Parliament supposed to be?”

But he said the diversity of the assembly and willingness of participants to find compromise on issues had left him “pleasantly surprised”.

The assembly embraced the full spectrum of British society, he said, from “people who are in denial to people who say we need to fix it tomorrow and everything in between along that line”.

“I feel proud of what has been achieved,” Adrian, a 52-year old lawyer from Belfast, told CHN.

“Everyone that’s involved in this is going towards a same goal,” he said, “And that makes me a lot more secure about the outcome of this than I was when going into it.”