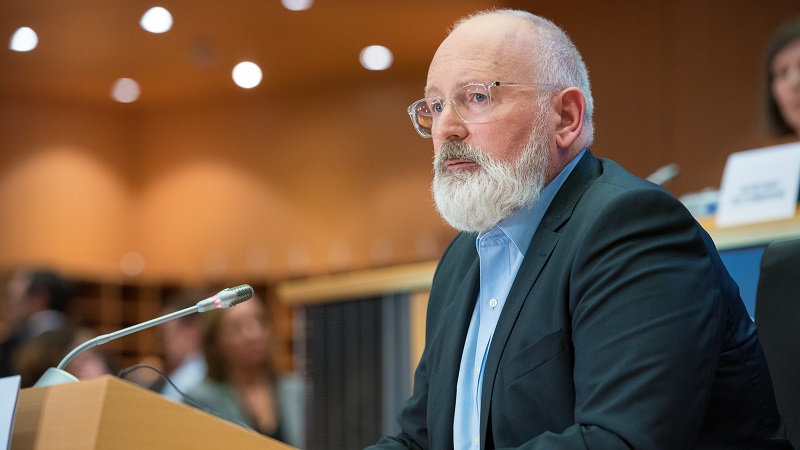 The incoming European Commission of Ursula von der Leyen is preparing a raft of new climate and environmental laws as part of a European Green Deal due to be unveiled on 11 December.

The draft version of the European Green Deal obtained by Euractiv outlines “a set of deeply transformative policies” that the new Commission intends to put forward in order to tackle climate change, clean up the environment and green the economy.

The document is a summary of the early draft proposal – marked “for internal use only” – that was circulated to EU countries’ national representations in Brussels in order to get some feedback. At the moment, it looks more like a shopping list, filled with numerous bullet points stacked under a series of headlines.

And the Commission “will present a comprehensive plan on how to increase the EU’s greenhouse gas emission reduction target for 2030 to at least 50% and towards 55%” by October 2020.

Further down, the Commission promises “mainstreaming sustainability” into all policies, by adopting “a green oath: ‘do no harm’”. In practice, Brussels will seek to eliminate “incoherent legislation that reduces the effectiveness in delivering the Green Deal”.

This includes financial aspects with a proposal to “screen and benchmark green budgeting practices” both at EU and national level. An “action plan on green financing” will be submitted in June 2020 in this regard. A review of “the state aid guidelines for environment and energy” is also on the agenda.

Other known initiatives include a proposal to revise the Energy Taxation Directive with a view to “align it” with Europe’s climate ambitions.

Under the “zero-emission nobility” heading, the Commission plans to extend the EU’s cap-and-trade scheme for carbon emissions, to the maritime sector and reduce the amount of free pollution credits allocated to airlines.

Brussels will also “assess the possibility of including road transport emissions” in the scheme, a proposal which has long been resisted by environmental groups. And it plans to “withdraw and resubmit” proposals on the Eurovignette directive to charge heavy-duty trucks on European roads, a proposal which is currently stuck with EU member states in the Council of Ministers.

Under the ecosystem and biodiversity preservation heading, the Commission proposes to “review all existing legislation affecting agriculture and forestry to ensure it is in line with renewed climate and biodiversity ambition”.

And under the “farm to fork” strategy, the EU executive intends to adopt “a toolbox for alternatives to pesticides” and reform food information rules “to improve consumers’ information”.

Finally, the Commission intends to review air, water and chemicals legislation with a view to “eliminating all sources of pollution.”

Although environmental campaigners generally hailed the “vast policy programme” put forward by the Commission, they said the proposals were “not up to the task”.

“The EU’s proposal to increase the targets to 50% or 55% is not in line with the Paris Agreement and its objective to limit global heating to below 2C, and as close as possible to 1.5C,” said Franziska Achterberg from Greenpeace.

Greenpeace and other environmental organisations are calling for a target of at least 65% by 2030, compared to 1990.

Besides, campaigners say October 2020 is too late to propose a new 2030 climate target. “EU leaders will not agree a new 2030 target until after an impact assessment, which would not leave enough time for the EU to submit a new 2030 target by the Cop26 in Glasgow in November 2020, as required under the Paris climate agreement,” Achterberg said in a statement.

Greenpeace was also disappointed by the Commission’s “flawed policies” on transport, noting there was no mention of a kerosene tax to tackle aviation emissions. And farm policy proposals lack measures to tackle “the over-consumption of meat and dairy products, the impact of factory farms or overuse of artificial fertilisers”.

Clean air and water policies were also deemed insufficient to tackle pollution at source. “The sources are known, such as toxic effluents from factory farming that end up in rivers and groundwater,” Achterberg said.

Finally, on trade, Greenpeace said the inclusion of a sustainable chapter in trade deals was nothing new. “Both Mercosur and Ceta have a sustainable development chapter. The problem is that the contents of the chapters are not legally enforceable,” Achterberg said.

This story was first published by CHN’s media partner Euractiv.