Australian artist’s works have sold for up to $1.3m. Police could not say whether they still have the skull, seized among hundreds of artworks during October protests 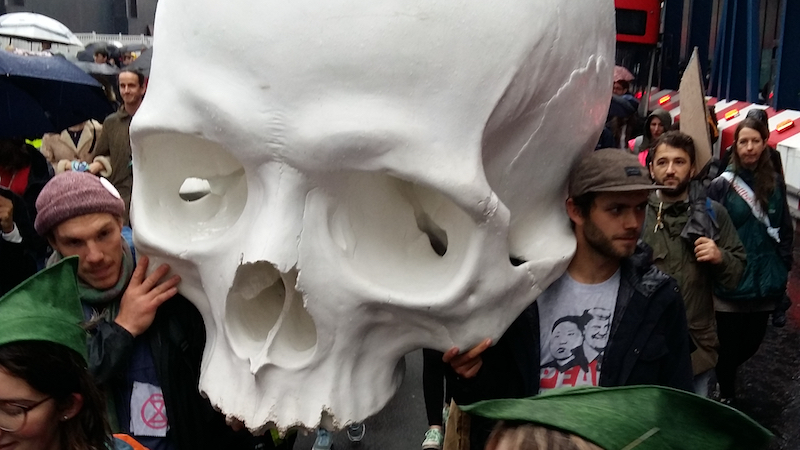 Sinks, toilets, scaffolding, tents and even cars – are all among the items confiscated by London’s Metropolitan police in an attempt to quell the Extinction Rebellion protests in October.

The capital’s police also took into custody hundreds of art works. Among them is a giant skull by renowned contemporary artist Ron Mueck.

The Australian, whose hyperrealistic sculptures have been exhibited at the Saatchi Gallery and the Tate, gifted a test casting to an Extinction Rebellion funeral procession designed to mourn the lives lost to climate change. The prototype served to model one hundred skulls that filled a room in the National Gallery of Victoria in Melbourne in 2017.

“Having heard that there was an XR skeleton procession planned it seemed an obvious way to make use of it and lend support to a cause I believe in,” Mueck wrote to CHN in an e-mail.

“It was lent to XR to use as visual accompaniment to their peaceful nonviolent protests in whatever way they saw fit. I wasn’t directly involved in its deployment.”

In auctions, Mueck’s artworks have been sold for as much as $1.3 million, the price varying depending on the size and medium of the artwork, according to auction database MutualArt. It is likely that the prototype would be worth significantly less than its final version, though the work could accrue value in time through its association with Extinction Rebellion.

Mueck said he has “no idea where it is now and no idea on what basis it was confiscated”. Extinction Rebellion’s said it was seized along with other skeleton sculptures. Contacted by CHN, the Metropolitan Police did not appear aware of the value of the object and said it was “unlikely we are going to be able to confirm the seizure of individual items at this stage – there are just too many”. 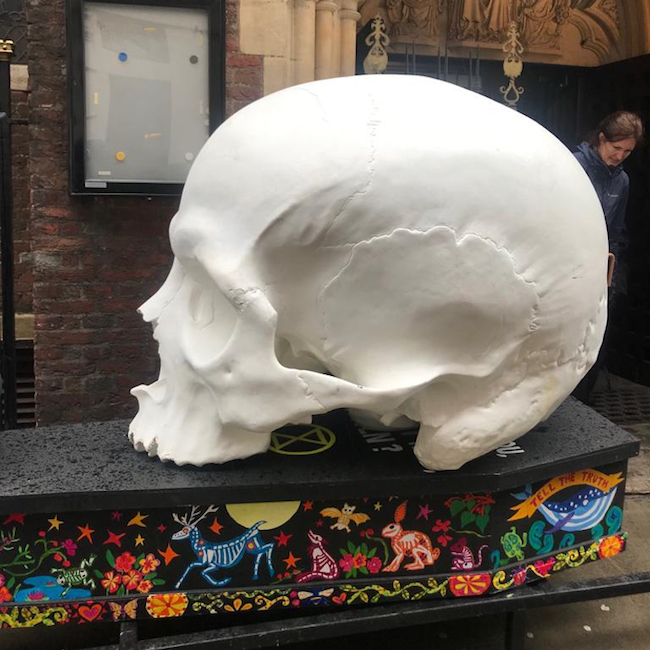 Other less high-profile protest art works, many of which took weeks to craft, were also taken.

Along with 40 people, Bristol artist Simon Tozer crowdfunded, built, mounted and ultimately glued himself to a cubic tower draped with Extinction Rebellion banners. Following the imposition of a city-wide protest ban on London, which is currently being challenged by the movement, the group decided to deploy the structure on the grounds of the Tate Modern.

Discovering the structure, Tate Modern’s director, Frances Morris, rapidly gave the greenlight to the action, Tozer said, granting permission to the protesters to occupy their grounds the full day.

The police however told the Tate that the ban prevailed over its right to hold the protest on its grounds, prompting the arrest of ten activists.

“Once it was up, we did get permission from the Tate for it to be on their land, so it was quite a surprise to us that it was taken down,” Tozer said. In a statement, Tate told CHN it had declared a “climate emergency” but “as a public body, we are bound not to endorse or actively support protest of this nature. However, as is always the case in relation to peaceful protests, we wouldn’t stand in the way of organisations demonstrating in our public space”.

Tozer described the seizure of the artwork as “very unreasonable”. “It wasn’t being used to block a road or disrupting anybody,” he added.

It is currently being held by the police as evidence, he said.

Chile has abandoned hosting Cop25, we cannot abandon its people

Kat Brendel, a full-time arts campaigner within the group, recently recovered her car from police, but has yet to see a jacket made by one of the movement’s chief designers, Miles Glyn, with the word “empathy” embroidered onto it.

“I love the fact that something that says ‘empathy’ and is covered in hearts is deemed a threat to the state,” Glyn told CHN.

“The police tactic has been to portray to protests as a bunch of people, bodies on a road,” Brendel said. “But actually there’s a huge range of creative talents and skills: from cooks and carpenters to sculptors and artists. Humanitarian, creative, community-oriented people.”

“The work that everyone’s put in, they’ve purposefully tried to eliminate that, because it makes us more human, and not the extremists that they like to present,” she added. 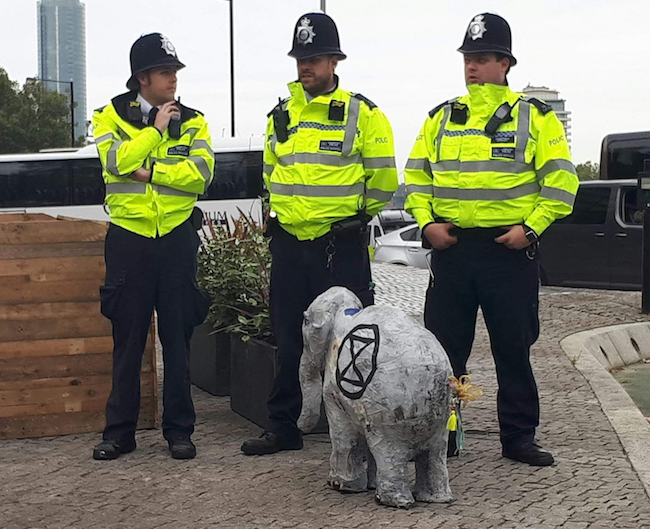 The police also confiscated a Noah’s ark made by the Christian Action Group in Bristol, West of England. 15 people crafted the object from wooden pallets over three weeks, including six teenagers from a school in East Sussex.

The Metropolitan police told CHN that protesters could claim back their items. But protesters say they are worried.

“One of the problems is that claiming your property could lead to the police bringing further charges against you,” Tobias Garnett, a member of Extinction Rebellion’s legal team, said.

“Another problem is that the police have been routinely destroying stuff from the camps as they cleared them, which they’re not supposed to do.”

“We would like to claim it back but as yet have not been able to locate it,” Barbara Keal, one of the artists who made the ark, said. “There has been some ambivalence in case doing so could be incriminating.” 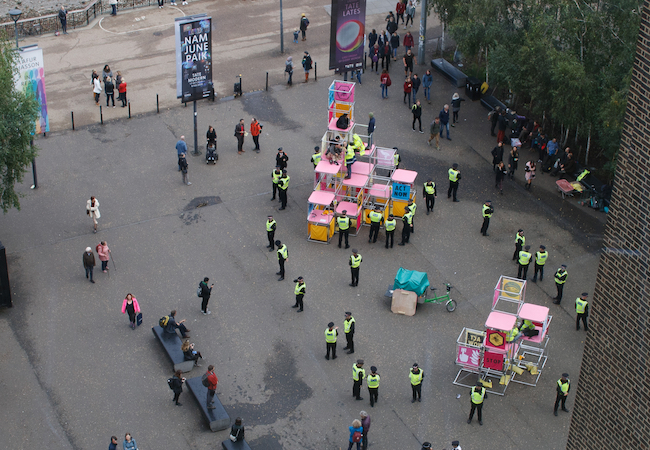 “The police’s confiscation of a good deal of artwork and similarly of facilities for disabled rebels – including their toilets and even a wheelchair – seemed particularly heartless aspects of the policing of October’s Rebellion,” Rupert Read, a philosopher and spokesperson for the movement, told CHN.

Although he admitted the confiscation was “a bit heartbreaking”, Glyn remained defiant.

“The more certain actions become illegal, the more space that leaves us to be creative and to create new stories in slightly different ways.”

“I’m going to make more banners saying ‘Love’ and ‘Care’ and watch them get dragged away,” he said.