Facing a total ban on their protest in London, the activists are now embroiled in a struggle for their right to assemble 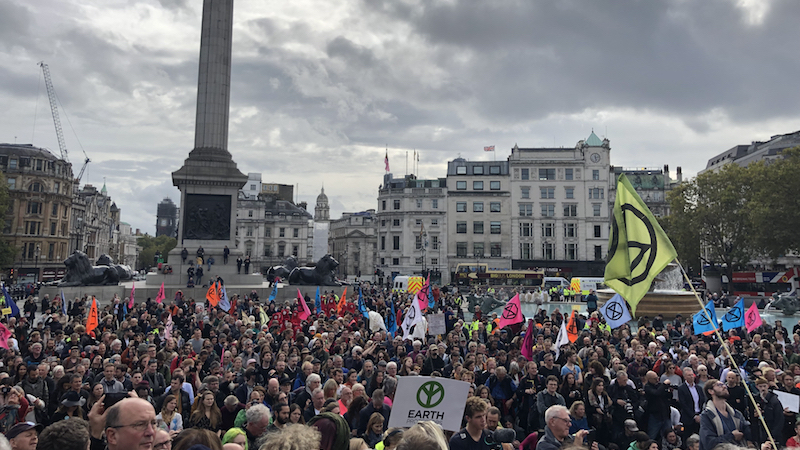 It started off last week as a global protest for climate action, but after nine days of increasing repression by London police, Extinction Rebellion was fighting for the right to protest at all.

Undeterred, if not galvanised, by a city-wide protest ban issued against them on Monday, thousands of Extinction Rebellion activists flooded Trafalgar Square in the UK capital on Wednesday afternoon.

Leading environmentalists, including writer and environmental campaigner George Monbiot and co-leader of the country’s Green Party Jonathan Bartley, sought and achieved arrest to take a stand on the climate emergency and freedom of assembly. They follow the arrest of Green MEP Ellie Chowns on Monday evening.

“I am here today to be arrested,” Monbiot told crowds under the autumnal sun. “In case the police were of any doubt of that, I’ve even brought a little sign saying ‘I’m assembling with Extinction Rebellion in breach of Section 14’”, referring to the police order that outlawed the group’s ‘Autumn uprising’, which disrupted the city centre for eight days.

As of Wednesday 8am there had been 1,642 arrests linked to Extinction Rebellion protests, the Metropolitan Police reported.

“This draconian decision is a disgraceful suppression of our human rights,” Asad Rehman, head of War on Want said. “But sadly it hasn’t happened overnight: from anti-fracking protesters to protesters against the arms trade to anti-racist campaigners, and of course to climate protesters, people are being consistently labelled as domestic extremists.”

Laurence Taylor, deputy assistant commissioner of London’s Metropolitan Police, has defended the order, calling it “entirely proportionate and reasonable to impose this condition because of the cumulative impact of these protests”.

Joanna Gilmore, an academic specialising in public order law at the University of York, told CHN: “The Extinction Rebellion protesters have positive rights of free speech and free assembly. And any restrictions on those rights, as the Strastbourg Court has made clear, have to be interpreted in favour of those seeking to assert their right to protest.”

“It seems to me a ban on protest of a particular movement throughout the whole of London is excessive and disproportionate, and if this isn’t I don’t know what would be,” Gilmore said.

Circumstances under which the order was issued have yet to emerge. The Met Police has the power to immediately impose the ban independently of the government or the mayor’s orders should it deem that a public assembly poses a serious threat to property or public order, according to Gilmore.

London mayor Sadiq Khan tweeted on Tuesday that he had not been consulted over the decision and was currently in talks with the Metropolitan Police over ways to allow activists to protest legally.

Formally known as the Section 14 of the 1986 Public Order Act, the ban was created under Margaret Thatcher in the aftermath of waves of industrial unrest in the late 1970s and early 1980s, including the miners’ strikes.

Gilmore described it as “a key part of the armoury that police forces across the country use to clamp down on environmental protests – in particular the anti-fracking movement”.

The police would also be able to issue the Section 14 order again, this time refining the terms of the act by perhaps narrowing the ban to a smaller geographic area.