As she steps down from leading UN sustainable energy push, Rachel Kyte said global institutions must be rebuilt and aligned with action on climate change 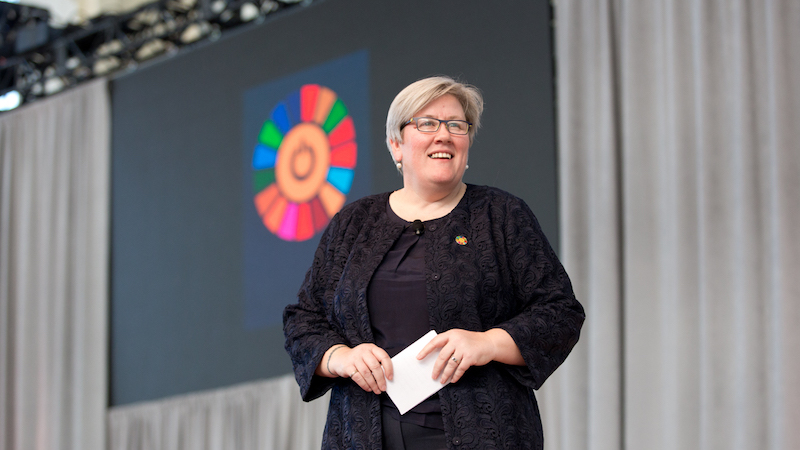 Rachel Kyte, the CEO of SE4All and UN secretary general's special representative for SE4all, who will step down this week (Photo: SE4All)

Kyte, who steps down this week as chief of Sustainable Energy for All (SE4All) and the head of the UN’s push to bring clean energy to the world’s poor, was speaking at a panel event organised by Climate Home News on the sidelines of the UN general assembly in New York.

She warned current “mid-level bureaucratic discussions” were not enough to align financial institutions with the Paris Agreement goals, adding that it was “utterly insane” that the flow of finance to help the the developing world cope with climate change was only “a bit bigger” than before the 2015 accord.

“There has to be a new Bretton Woods summit”, organised by UN secretary general António Guterres, with leaders from China, the EU and the US around the table to reshape multilateralism and align all public investments with climate action, she told the audience in New York.

The panel event was hosted in collaboration with PricewaterhouseCoopers and the Climate Investment Funds. Catch up on highlights in this tweet thread.

The original 1944 conference in Bretton Woods, New Hampshire laid the foundations for much of today’s global economic order. It also led to the creation of the International Monetary Fund and the World Bank. (Kyte is a former vice president of the latter). The system was designed to hold in check the trade conflict and rising nationalism that contributed to the outbreak of World War II.

But those dynamics are resurgent. National interests, domestic politics and the trade war between China and the US have dampened momentum for climate action at a time rising emissions require an acceleration.

On Monday at a UN climate action summit, the world’s largest emitters failed to answer Guterres’ call for plans on how to decarbonise their economies to net zero emissions by 2050.

“If our multilateral structures are failing us and they don’t reform,” said Sharan Burrow, general secretary of the International Trade Union Confederation (ITUC), who was also on the panel, “then we are going to have to re-create some of the basis on which the world does business.”

She said president Emmanuel Macron of France was one of the few world leaders attempting to address this problem. Germany and France launched an ‘alliance for multilateralism’ at this week’s UN general assembly.

UN ambassador for Belize and chair of an alliance of small island states Lois Young, said climate finance was “in an abysmal state,” and called for “a transformation” of the financial system. While Farhana Yamin, veteran climate lawyer and Extinction Rebellion activist, warned of “the breakdown of that entire system on which we can confidently rely on evidence-based policy”.

In a report published on Wednesday, the United Nations Conference on Trade and Development (Unctad) called for giving governments more power to tackle the climate crisis by reorienting the monetary system toward a “global Green New Deal”.

Speaking to CHN ahead of the UN summit, Kyte said faster finance, new institutions and a more inclusive conversation about the future were needed to close the ambition gap.

“The sense of urgency and the application of sustained, concentrated attention is not there everywhere. We need a new generation of institutions,” she said.

Besides the need for reform of the economic order, Kyte also warned that oil and gas companies were holding back efforts to bring clean energy to the poorest people on earth.

SE4All’s latest tracking report showed the world was off the pace for 2030 sustainable development goals to roll out clean electricity and cooking everywhere.

If energy planning decisions are based on dialogue between governments and incumbent – fossil fuel – energy companies, “it is not going to get us where we want to go,” she said.

On the fringe of the UN climate action summit on Monday, the Oil and Gas Climate Initiative, the industry’s response to climate action which includes 13 of the world’s largest oil and gas companies, set out their vision of a future with fossil fuels.

Kyte said the industry came to the summit “to be seen in dialogue” with the youth and those calling for ambition. “They cannot even commit to not spending any money lobbying for the other side. This is an action summit.” she said.

Research by the think-tank Influence Map found that ExxonMobil, Shell, Chevron, BP and Total spent more than $1 billion of shareholder funds on lobbying and spreading misleading information about climate change in the three years following the 2015 Paris deal.

After nearly four years leading SE4All, Kyte is set to become the first female dean of the Fletcher School of Law and Diplomacy at Tufts University in Massachusetts, US.

While championing radical change, Kyte speaks from personal experience about the importance of making the transition work for households and communities.

During the UK miners’ strikes in the 1980s, her father was an electrical engineer, called out to fix pylons after a storm – sometimes having to cross picket lines to make critical infrastructure safe. In the wave of energy sector privatisation that followed, he was made redundant.

“The industry was reformed in a fairly callous way,” she told CHN. “You don’t forget what that felt like.”

Her move into academia is partly to escape the relentless jetlag of UN diplomacy and spend more time with her wife and two children. At the same time, she had been looking for a way to work with the next generation.

“I am very inspired by the climate movement, but there is a quality to the young people’s approach to the world that is very inspiring.”