Comment: Climate denial is no longer the problem, it is inaction of politicians who know what is at stake. They must feel pressure from all sides 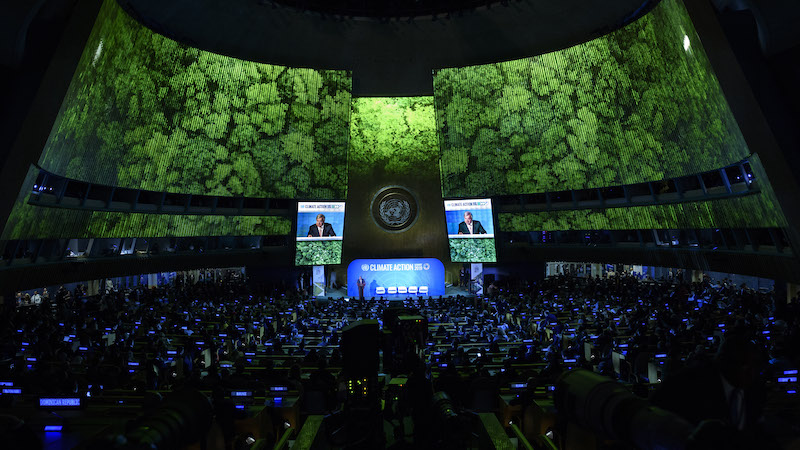 The UNSG Climate Action Summit in New York finally took the temperature on the global politics of climate action.

The summit also triggered the diplomatic starting gun for the next set of critical climate decisions coming in 2020 at COP26 in Glasgow. With so much climate pollution in the atmosphere, without a big increase in action at Glasgow it will be practically impossible to keep climate change within safe limits.

Since the landmark Paris accord in 2015 we have developed better clean technology, but global greenhouse gas emissions keep rising. The impacts of climate change are hitting harder and earlier than expected. Catastrophic damage from the Caribbean to Africa to Europe capture regular headlines. Scientific warnings on the risks of climate change are dramatised by unprecedented glacial melting in Greenland and wildfires in the Amazon.

People are fired up for action from those with power and authority. Unfortunately, the lukewarm outcomes from the UN Climate Action Summit give little faith that the mercury is rising in the halls of power.

Despite the UN secretary general going far beyond the usual diplomatic niceties – only allowing leaders announcing real commitments a platform – the response from major polluters was virtually non-existent. If solutions are cheaper, public opinion is mobilised and impacts much clearer, why is political action not following?

The battle to define and shape climate politics will rest on the answer to this question. It is vital to get this answer right. There is no time to fight the wrong political battles.

Some of the popular answers are just incorrect. Ten companies may be responsible for most of the world’s carbon pollution, but the vast majority of the world’s fossil fuels are owned by countries not capitalists. Climate change requires agreement by states.

The problem is also not with the deniers of climate science anymore. Outside the US and Australia, climate deniers have very little influence. The systematic sowing of scientific doubt has delayed global climate action but cannot be blamed for failure to act in the future.

The world is full of big problems with readily available solutions, from poverty to malaria. Change fails for multiple reasons, from bureaucratic inertia to ideological resistance. Politicians delay when they fear the risks of action outweigh the risks of inaction.

But unlike climate change, failure on most issues now doesn’t stop success in the future. Climate change is unprecedented because failure now is failure forever. Climate action delayers need to be convinced that going slowly is no longer economically safe. Companies resisting change must face pressure to show they are fit for a low carbon world or investors will take their money elsewhere. Shareholders and savers need to use the courts to challenge bad decisions by managers of their money. Proposals like the “Green New Deal” can address the legitimate fears of workers that they will be left behind.

What goes for companies also holds true for countries. International investors need to tell countries with no credible plans to stop building dirty infrastructure or they will face higher costs of borrowing. Governments must make sure taxpayers’ money is not being wasted to prop up polluting industries.

Unfortunately, the UNSG summit showed leaders currently distracted by other economic, social and security problems. Some of these are of their own making – like Brexit – others are geopolitical, like the US-China trade war. The fragmented geopolitics blocking climate action was dramatised when Trump unexpectedly swept into the UN summit but only for ten minutes so he could watch the speech of his new best friend Modi. A sustainable planet cannot be built on the shifting personal whims of global leaders.

Distracted leaders will require more voices than only school children’s to raise the barometer on climate action. Leaders in finance, agriculture, tourism, cities and real estate know their major economic interests are being damaged by climate change. It’s time they  make action on climate change their number one demand when meeting politicians. Diplomats should understand that unless climate change is tackled effectively there will be no other geopolitics to manage.

There is no silver bullet for changing the politics of climate change. Action is needed in negotiating halls, legislatures, boardrooms, courts and on the streets if we are to successfully respond at the unprecedented pace needed.

As co-hosts of the Glasgow climate summit, the UK and Italy will need to mobilise and channel all these forces into a “whole of society” summit in 2020. This will require creativity, leadership and a willingness to take political and diplomatic risks. But these are nothing compared to the risks we are taking with our security and prosperity by doing nothing.

Nick Mabey is chief executive and a founder director of E3G.