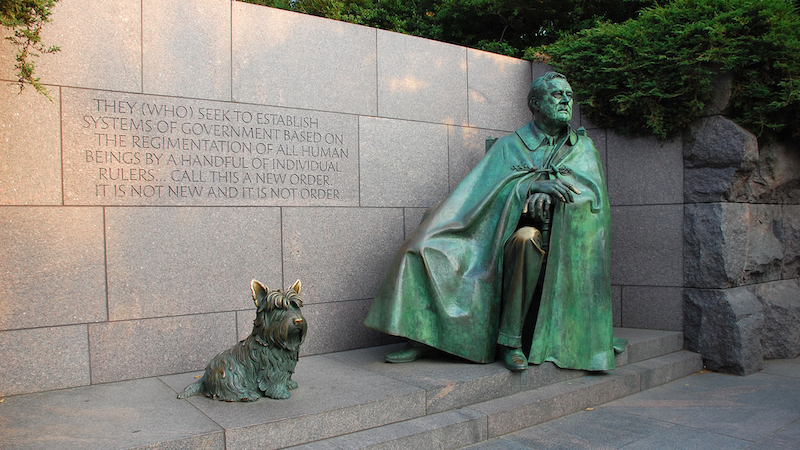 A memorial to Franklin D. Roosevelt and originator of the New Deal in Washington, DC (Photo: Deposit Photos)

Only a global Green New Deal can provide governments with the muscle needed to take on the climate crisis, a UN development agency report released on Wednesday said.

The United Nations Conference on Trade and Development (Unctad), which was founded in 1964 to help developing countries to access equitable international trade, called on governments to overhaul the rules of the international trade and monetary systems so that all countries – in particular developing ones – could carry out the necessary mass investments to decarbonize their economies.

Unctad secretary general Mukhisa Kituyi said meeting the UN sustainable development goals, which include reining in the heating of the planet, “requires rebuilding multilateralism around the idea of a global Green New Deal, and pursuing a financial future very different from the recent past”.

“The global economy does not serve all people equally,” said Richard Kozul-Wright, director of Unctad’s division on globalization and development strategies, who oversaw the report. “Under the current configuration of policies, rules, market dynamics and corporate power, economic gaps are likely to increase and environmental degradation intensify.”

Instead of hoping to fix the crisis in developing countries through a blend of public and private sector initiatives, which an Unctad press release branded as “taken from the playbook of banking conglomerates”, the development agency urged governments to take the lead.

Among a battery of global reforms, Unctad recommended granting debt relief and revising the way that debt was structured in order to allow developing countries to pay for green policies.

“We need a set of rules in place that can handle sovereign debt problems when they emerge in much fairer, efficient and transparent way than is the case today,” Kozul-Wright said.

The agency also called on the creation of a global environmental protection fund that would provide predictable and stable emergency funding. This could be financed by tapping into special drawing rights, an international monetary reserve currency originally set up by the International Monetary Fund to act as a supplement to national currencies.

The report found that global trade, be it under the form of regional or bilateral agreements, should not have the authority to shape questions such as the cross-border flow of capital, debt or equity. Instead, the international community should privilege capital controls and put an international system into place to oversee capital flow between countries, including developing ones.

Echoing recent calls to create a European Climate Bank, authors also suggested shifting the role of central banks from taming inflation to aggressively championing climate finance. To checkmate tax evasion, it further called on the establishment of a global minimum corporate tax rate on multinationals between 20 and 25% combined with capital controls.

“This is a big public investment push,” Kozul-Wright told Climate Home News. “It’s not going to be done by the private sector. You need public banks to finance this, because we don’t think that the current financial system as it is currently constructed will ever deliver finance to public goods of this kind on the scale that we’re talking about.”

In the absence of such constraints, green finance could increase to around $1.7tn every year, according to Unctad estimates, generating at least 170 million jobs in the world and allowing a clean industrialisation in the global south.

Originally conceived in 2008 in London by a group of economists and environments, the Green New Deal draws inspiration from the New Deal, US president Franklin Roosevelt’s all-encompassing stimulus package to counter the effects of the Great Depression and reform the financial market. The Green New Deal envisages mobilising the state to tackle social inequality and carbon emissions as one.

It was first popularised in the US by congresswoman Alexandria Ocasio-Cortez and has since become a plank policy for US democratic candidates and embraced by EU politicians.

British economist Ann Pettifor, part of the original London Green New Dealers group, called the report “enormously significant, because while the UN and its scientists have taken the lead on a scientific side on this crisis, we need to understand that the climate and the economy are deeply integrated”.

“This is a crisis that doesn’t belong in one place. It’s neither a north nor a south crisis and it requires global collaboration,” Pettifor said. “It’s echoing the revolutionary monetary theory that underpinned the New Deal.”

Pettifor likened the reorientation of the monetary system recommended by Unctad to Roosevelt’s decision to ditch the gold standard.

“Under the Gold standard, Wall Street and the City of London called the shots and really influenced important domestic policies, like the exchange rate, the ability of money to flow across borders and the ability of the government to spend,” Pettifor said.

“The very first thing that Rooselvelt did on the night of his inauguration was to begin to dismantle this system and demand that the banks hand over all of their gold so that in future it would be the government and not Wall Street that would be in the driving seat of the economy.”

“We’ve got to learn from Roosevelt if we are to tackle the climate crisis right now and that is what Unctad is trying to do,” Pettifor said.