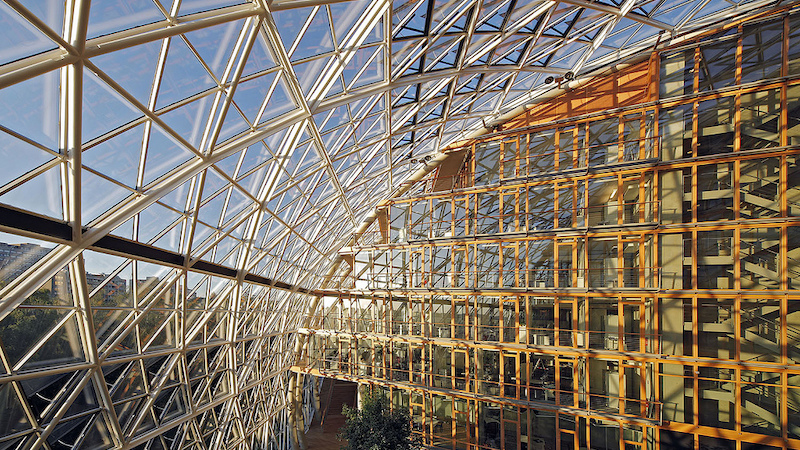 A proposal to add a green subsidiary to the European Investment Bank (pictured) has puzzled the bank (Photo: Flickr/Forgemind ArchiMedia)

Emmanuel Macron has thrown his weight behind the idea of an EU bank for climate investments, ahead of the bloc’s parliamentary elections this year.

“Reconnecting with the thread of progress also means taking the lead in the ecological fight. Will we be able to look our children in the eye if we do not also reduce our climate debt?” Macron wrote in an op-ed on the renewal of Europe published on Tuesday in outlets across 28 EU states, “The European Union must set its ambition and adapt its policies accordingly with such measures as a European Climate Bank to finance the ecological transition”

The call, a spokesperson for the French government confirmed to Climate Home News, was inspired by the proposal for a European bank for climate and biodiversity championed by French economist Pierre Larrouturou and top climate scientist Jean Jouzel.

Part of a wider set of measures dubbed the climate-finance pact, the European bank for climate and biodiversity as conceived by Larrouturou and Jouzel would take the form a green subsidiary of the European Investment Bank (EIB). It would provide 0%-interest loans for climate projects to each EU member state worth up to 2% of their GDP.

Speaking at a conference in Rennes on Tuesday night, Jouzel said that he was “quite pleased Emmanuel Macron would take up the initiative”.

Macron however steered clear of explicitly backing Larrotouru and Jouzel’s climate-finance pact, or providing details on how the bank would work. Such vagueness, the spokesperson for the government said, was intended to allow candidates during the European elections to appropriate the project for themselves, rather than lock them into a pre-defined framework.

More than 600 political figures have backed Larrouturou and Jouzel’s climate-finance pact, with Spanish president Pedro Sanchez and the pope ranking among its most influential supporters.

On 2 March, environment minister François de Rugy confirmed he had met Jouzel to discuss the project and had raised it with Macron.

“I believe that the real idea is to have a European tool that will not weigh on the budgets of European states and that will be like the European Bank for Reconstruction and Development, created when we opened ourselves up to the former countries of Eastern Europe,” he said

New UK green watchdog to be based on EU system, says Gove

But the initiative has left the current European Investment Bank (EIB) puzzled. A spokesperson said Europe already had a climate bank: the EIB. Such a reorganisation was unnecessary, what was needed was greater investment from member states.

Writing on 11 January in the business daily Les Echos, vice-president of the EIB Ambroise Fayolle said: “The EIB addressed at least 25% of its investments into the fight against climate change. Despite the efforts of the European Commission and the EIB, financial means remain insufficient by comparison to the size of the needs. So in the end we all agree! Yes, Europe must invest. But let’s try to use what already exists and has worked for the past 60 years – the European Investment Bank – even if that means using it more and better.”