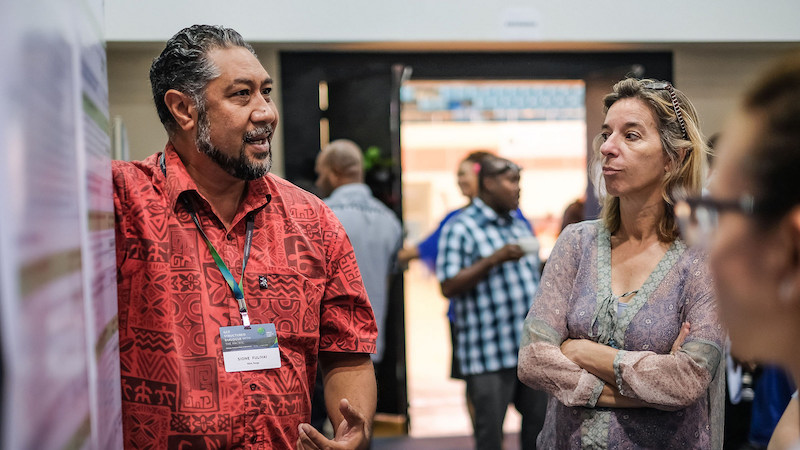 Delegates at a recent Green Climate Fund event in the Pacific (Photo: GCF)

France and the UK became the third and fourth countries to pledge to double their contribution to the Green Climate Fund.

President Emmanuel Macron made the announcement in the final hours of the meeting of G7 leaders in Biarritz, on France’s Atlantic coast, on Monday evening.

France’s pledge to contribute $1.71 billion to the UN flagship climate fund came after the UK also promised to double its contribution to $1.75bn.

During the G7 meeting, Canada announced it would provide $224 million to the fund – matching the country’s previous offering.

Last year, both Germany and Norway committed to double the amount of money they would put into the fund, bringing the total amount of new money pledged to just under $6bn, according to a tracker by the World Resources Institute.

The fund was created as a carrot to convince poor countries, that are not historically responsible for climate change, to commit to curb their pollution under the Paris Agreement.

Wealthy countries initially promised $10.3bn in start-up capital to the fund in 2014. Currency fluctuations and Donald Trump refusing to deliver $2bn of the US pledge has yet seen the GCF receive only $7bn in contributions. So far, more than $5.2bn has been allocated to projects to help vulnerable countries cut emissions and adapt to the impacts of climate change.

The GCF has now asked rich countries for further contributions to raise cash for the next three years. This is due to culminate in a pledging conference in the autumn.

Yannick Glemarec, executive director of the GCF, said doubling contributions to the fund was “vital to support developing countries to raise and realise climate ambitions”. The fund has $15bn worth of outstanding projects requesting assistance.

The replenishment of the GCF was made a priority at the G7 summit over the weekend and is also high on the agenda of the UN climate action summit convened by secretary general António Guterres next month in New York.

A G7 statement summarising discussions on climate change, biodiversity and oceans indicated that other G7 countries, which also include Italy, Japan and the US, “are in the process of finalising their contributions”.

UN special envoy on climate change Luis Alfsonso de Alba, told reporters that organisers of the UN climate action summit were “quite satisfied with the developments, especially on the replenishment of the GCF” – welcoming European countries’ pledge to double their contributions.

While the announcements have been welcomed by observers, the gap between the money pledged and what is needed to help developing countries tackle climate change remains significant.

Rich countries have pledged to mobilise $100bn a year from a variety of sources by 2020 to help vulnerable countries cope with climate change – a target that is yet far from being met.

In a statement to CHN, the Alliance of Small Island States (Aosis) warned that “to even credibly approximate the goal of $100bn, both our development partners and the private sector must act decisively”.

“The rapidly narrowing window of opportunity for effective climate action demands greater ambition and swift ramping up of contributions from other larger emitters,” it added.

Jan Kowalzig, an expert on climate politics at Oxfam’s German branch, warned that while doubling pledges to reach a target of $15bn in contributions “may sound ambitious”, it is in fact “a modest target when considering that the GCF secretariat assumes its own programming capacity could grow by $5bn a year”.

The replenishment of the GCF is “only one step” in meeting the $100bn goal and “additional steps are needed to close the gap”, he told CHN.

“What we now see is that rich countries, struggling to fulfil their promise, are inflating the amount they provide,” he warned, adding that countries were “grossly overestimating” the climate relevance of the funds provided.

Kowalzig also warned against contributions to the fund in the form of loans, describing them as “highly problematic” and “deeply unfair”, pointing to the fact cyclone-hit Mozambique has been forced to accept loans to rebuild the country.

He added that loans reduced the GCF’s flexibility in allocating money for projects and did not satisfy rich countries’ commitments under the Paris Agreement to meet developing countries’ cost of action.