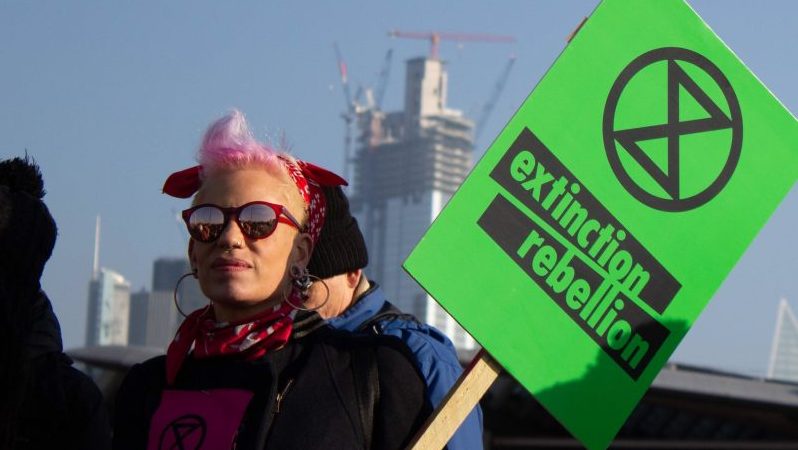 Extinction Rebellion is calling on the government to treat climate change as an emergency (Pic: Flickr/Julia Hawkins)

Vegan campaigners are to join arms with civil disobedience group Extinction Rebellion in a series of actions in the UK in October, in a move to promote plant-based diets.

Created in June, the group Animal Rebellion describes itself as “a mass volunteer movement that uses methods of non-violent civil disobedience to end the animal agriculture and fishing industries, halt mass extinction and minimise the risk of climate breakdown and social collapse”.

It expects at least 10,000 people to block roads, stage sit-ins and volunteer for arrest in major UK cities, such as London and Manchester, during Extinction Rebellion’s next two-week protest, starting on 7 October. Groups in Israel and Canada are set to take part in similar disruption.

The last action of Extinction Rebellion in April saw over 1,000 people arrested, after activists occupied and parked pink boats and trucks in London’s arteries, including Oxford Circus, Waterloo Bridge and Parliament Square.

“We’ve been inspired by this success,” Animal Rebellion writes on its website “and believe it will continue if more of us join. We believe that this movement is the route to ending the industries of animal farming and fishing, and achieving justice for animals, because we know that climate catastrophe and ecological collapse cannot be averted while these industries continue to exist.”

Animal Rebellion subscribes to Extinction Rebellion’s three core demands: for the government to “tell the truth” by declaring a climate and ecological emergency, act now to halt biodiversity loss and slash emissions to net zero by 2025, and set up a citizens’ assembly to oversee the transition.

The group believes that these asks entail the end of meat industry, citing research that shows emissions from meat-based diets are approximately twice as high as those from vegans. It is also calling on recognize animals’ “resistance to exploitation and their liberation from animal agriculture, fishing and other unjust practices.”

Spokesperson Alex Lockwood told Climate Home News they did not intend to alienate people through their methods and were open to a “civilized dialogue” with other sectors of society. They were discussing internal disagreements with farmer members of Extinction Rebellion, he said.

“We need rapid change to our food system if we are to tackle the climate emergency,” Lockwood said. “And that may be very uncomfortable for people. But what are we meant to do? If we know that we need system change we can’t just sit around and wait for it to happen, because it’s not.”

The announcement comes days after the Intergovernmental Panel on Climate Change (IPCC) highlighted the outsized carbon footprint of meat production compared to other food sources.

“The consumption of healthy and sustainable diets, such as those based on coarse grains, pulses and vegetables, and nuts and seeds, animal-sourced food presents major opportunities for reducing greenhouse gas emissions,” the IPCC said in a landmark report on the links between land use and climate change.

It was widely interpreted by media as a call on individuals to eat less meat, prompting an angry backlash from British livestock farmers. With veganism growing in popularity, defending the meat industry was a hot topic for the UK’s National Farmers Union’s last round of internal elections.

For a more plant-focused vision of British agriculture, Lockwood pointed to a 10-year transition plan by the RSA Food, Farming & Countryside Alliance.

Research by Harvard university showed that the UK could save up to nine years of CO2 emissions by changing the use of land currently employed to grow feed for livestock for cultures of grains, beans, fruit, nuts and vegetables for humans.

This article was amended to reflect that the original IPCC quote included the words “animal-sourced food”.