The Metropolitan Police plan to charge more than a thousand climate campaigners with public order offences, after they brought London to a halt in April 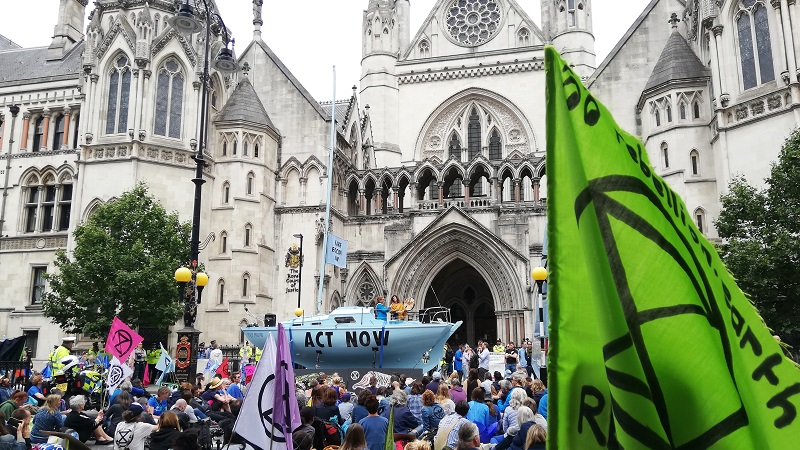 Extinction Rebellion protesters in front of the Royal Courts of Justice in central London on Monday (Photo: Chloé Farand)

Hundreds of Extinction Rebellion activists are due to appear in court over the next couple of months, in one of the UK’s largest mass prosecutions of environmental campaigners.

The movement brought London to a standstill earlier this year, as thousands of people blocked some of the capital’s busiest roads to demand government action commensurate to the “climate emergency”.

While the activists’ message resonated politically, their tactics fell foul of the law. London’s Metropolitan Police says it will push for all 1,151 people arrested during the protest to face charges.

Members of Extinction Rebellion criticised the response to non-violent direct action, saying it was a waste of court time that could be better spent on serious crime.

As of last Thursday, 180 of those arrested during April’s fortnight of protests had been charged – the majority for breaching the UK’s Public Order Act and obstructing the highway. Ten had been through the courts and seven convicted.

Another 29 protesters appeared in court for a plea hearing last Friday. About 30 are due to appear in court on each of the last two Fridays of July and 50 each Friday in August. The City of London Magistrates Court put aside two courtrooms to deal with the cases, according to a spokeswoman for Extinction Rebellion.

Among those arrested who haven’t yet been charged is Farhana Yamin, an international climate lawyer who was handcuffed and led away by police after she superglued her hands to the pavement outside oil giant Shell’s London headquarters.

“If all people arrested were to end up being prosecuted that would be unprecedented,” she said.

The Met Police told Climate Home News officers continued to progress more than 900 cases through the court system thanks to a dedicated team “following up and thoroughly investigating all arrests that were made”.

John Valentine, a retired magistrate and member of Extinction Rebellion’s legal support team, confirmed more activists were being charged by police every day.

According to Valentine, the prosecution service is considering trying up to 10 people at a time, to speed up the process. “This is an absolute recipe for complete chaos,” he said.

“And Extinction Rebellion does not stop protesting… People will continue to get arrested and the court system will become more and more clogged up.”

With most protesters expected to receive a light sentence or a conditional discharge from the courts, Extinction Rebellion is weighing up its own legal action to challenge the grounds for prosecution.

On Monday, Extinction Rebellion activists launched a week of action across the UK, blocking traffic in five cities using boats painted with the slogan “act now”.

Hundreds of people gathered in front of the Royal Courts of Justice in central London to call for ecocide to be recognised as a crime – a cause advanced by barrister Polly Higgins, who died earlier this year.

Speaking in front of the building, activist Zoe Lafferty described how she pleaded “not guilty” to a public order offence in court last week. Her action was “reasonable compared to what is waiting to happen if the government doesn’t take serious action on climate change now,” she said.

The mass prosecution of activists was “a really absurd focus of energy,” she added, and one that showed the government’s “weakness” in the face of mass protest.

Commander Jane Connors from London’s Metropolitan Police said in a statement the disruption caused by Extinction Rebellion in April was “serious” and “beyond unacceptable”.

“As ever, our policing focus was to balance the right to protest while ensuring Londoners could continue to go about their daily business. However, protesters continually chose to ignore the conditions imposed by the [police] in order to keep London moving. As a result an exceptionally large number of arrests were made in order to contain the serious disruption that was being caused,” she said.