Reporting on latest science around climate change and land use focused on rich nations’ eating habits, but did it miss the bigger picture? 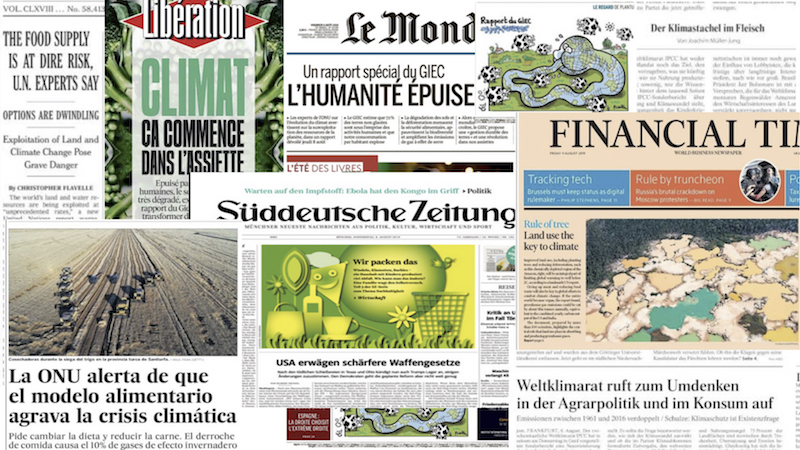 The Intergovernmental Panel on Climate Change is widely regarded as the gold standard of climate science. But is the world’s media paying attention to it?

Last week’s IPCC report on land use may not have turned out to be the headline-generating machine that the 2018 report on limiting warming to 1.5C was; nor did it go unnoticed. The scope for stories was wide, with co-chair Jim Skea telling Climate Home News the paper was “the most complicated thing I’ve ever been involved with”.

While some journalists picked up on trade-offs between carbon storage and food production, the importance of indigenous land rights or sustainable farming practices, one theme dominated: meat.

Led by western media, the majority of coverage focused on the environmental impact of readers’ steak habits – even in countries where vegetarian diets are dictated by financial constraints or spiritual practice, not consumer preference.

Despite being the first IPCC report with a majority of authors from the developing world, few news outlets in poorer countries dedicated space to it. What little reporting filtered through was largely based on the IPCC press release or newswire copy, rather than highlighting the stark implications of the science for vulnerable communities.

Comment: How we manage land is critical to climate justice

AFP led with “Can we eat Big Macs and still avoid climate chaos?”, summarising that “not everyone needs to become a vegetarian, much less vegan, to keep the planet from overheating, but it would probably make things a lot easier if they did.” Reuters also attempted to capture that nuance, writing “although the report stopped short of explicitly advocating going meat free, it called for big changes to farming and eating habits to limit the impact of population growth and changing consumption patterns on stretched land and water resources.”

In the UK, The Times called on the reader to “Eat less meat to save the Earth”, while in the Guardian leftist commentator George Monbiot hit out at the IPCC for “[understating] the true carbon cost of our meat and dairy habits”. It provoked a backlash from British farming unions, who lamented “biased” and “selective” reporting of the science.

Germany’s Frankfurter Allgemeine had a similar focus, describing it the report as “a thorn in the flesh” (the word “fleisch” also meaning meat). Spanish online magazine Economía Digital warned the report would worsen the dire state of the national meat sector, which has suffered from declining demand in the past decade.

The focus on diet isn’t without its problems, Max Boykoff, director of the Center for Science and Technology Policy Research and a seasoned observer on climate coverage, told Climate Home News.

“Some of these ways in which certain outlets can choose to focus in on the individual can serve to distract and simply displace in a finite news hole those larger scale stories that need attention: the revolutionising of our agricultural practices, the way we manage our forests,” Boykoff said.

“Yes, [eating habits] are the way we come into contact with the environment most frequently. But to stay in that place is to atomise and limit the possibilities for making the kind of changes that are needed.” It also gave “corporations a free pass”, he said.

India initially set its own agenda, with the Business Standard first to obtain a leak of the draft report in July. Under the headline “Climate change could cause 29% spike in cereal prices,” journalist Nitin Sethi noted that increased aridity in Asia could severely impact food security, and leave up to 522 million people prey to “water stress, drought and habitat degradation…. in a significant finding for countries such as India”.

On the day of the final report’s publication, however, much of the national media toed the vegetarian line. The Times of India went with an uncannily similar headline to that of The Times in the UK (“Adopt a green diet and help save Earth: UN body report”), while India Today gave twin prominence to the report’s messages on food security and plant-based diets.

In the most vegetarian country on earth, that angle smacked of irresponsibility, said Dharini Parthasarathy, a communications officer at the umbrella group Climate Action Network (CAN).

“The report also talks about the extent of hunger and poverty that will be exacerbated by bad land use and climate change. For decision makers in India, that’s an alarm bell. We’re in an agrarian crisis, so for that not to be the big takeaway is quite something,” she said.

The big picture wasn’t lost on everyone.

The New York Times wrote of the planet’s soil as a carbon and hunger time bomb. “A half-billion people already live in places turning into desert, and soil is being lost between 10 and 100 times faster than it is forming.” It quoted one of the lead authors of the report, Cynthia Rosenzweig, who said that “the potential risk of multi-breadbasket failure is increasing… All of these things are happening at the same time.”

In France, Germany and Spain media called for a revolution in food systems. The French and German media covered the report particularly extensively, with Le Monde, Liberation and Ouest-France devoting front pages to it. Left-leaning Süddeutsche Zeitung mentioned the report in no fewer than 16 articles on Thursday and Friday.

Addressing a nation of farmers, France’s press delved deeper than others into the takeaways for agriculture. Le Monde splashed with the headline “Humanity is exhausting the earth” – the word “terre” carrying the double meaning of “planet Earth” and “soils”. A caricature by Plantu shows a mapped snake biting its own tail, in a reference to a French phrase denoting self-harm.

To Olivier de Schutter, former UN chief on the right to food, the report is first and foremost an endorsement of agroecology. He told the French paper of record that humanity needed to turn away from fertilisers and pesticides and embrace organic methods.

Like Climate Home News, Brazil’s Folha de S Paulo homed in on the competing demands on land to cut emissions through forest plantations and biofuels, and grow food.

In the highest and fourth highest emitting countries in the world, China and Russia, media stuck to neutral summaries of the report’s key messages.

As record wildfires tore across Siberia, unleashing plumes of smog the size of the EU, the Russian press missed an opportunity to cover feedback loops between fires and climate change. It wasn’t for want of trying on the part of Greenpeace Russia, which circulated a press release to 400 outlets titled “UN recognizes fires in natural areas as a threat to climate”. The report noted that “fire weather season has already lengthened by 18.7% globally between 1979 and 2013,” with “significant increases in forest area burnt in boreal Siberia”.

Instead, state news agency Interfax contented itself with a broadbrush overview of the report, focusing on rising food security risks and the need to slash meat consumption.

Tanzania’s The Citizen offered a rare bit of African commentary, with an editorial urging the “government… to check the habit of wanton falling [sic] of trees for the excuse of farming” and advocating “strong punitive measures against the destruction of natural forests”.

Reuter’s charitable arm, the Thomson Reuters Foundation, was one of the few outlets to focus on the report’s conclusion about the critical role of indigenous people  in land and climate conservation.