Ahead of a meeting of European leaders, the European Commission president says raising the bloc’s Paris Agreement target ‘does not make sense’ 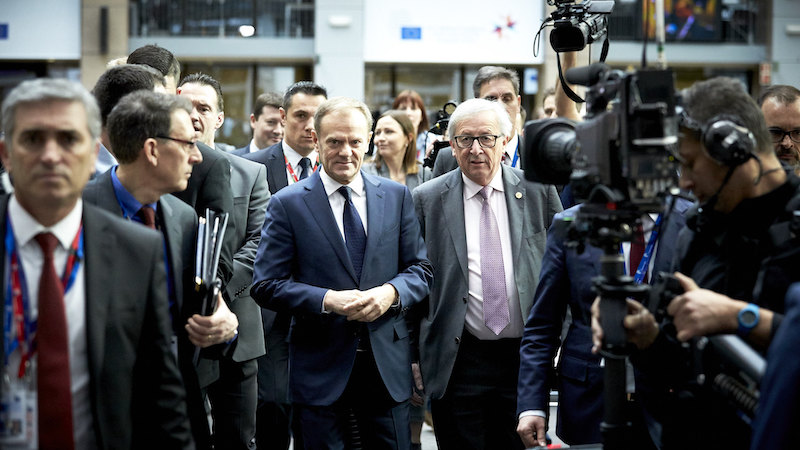 EU council president Donald Tusk and commision president Jean-Claude Juncker at a meeting of the council in 2017 (Photo: EU Council)

The European Commission president said he does not support raising the bloc’s 2030 climate goal, days before EU leaders are expected to discuss climate ambition.

The exiting president Jean-Claude Juncker said the bloc should keep its policy to cut emissions to 40% of their 1990 level by 2030.

Like all Paris Agreement signatories, the EU has committed to review its climate plan by the end of 2020. The 2030 target is the central pillar of the EU’s commitment. UN chief Antonio Guterres has called on leaders to update their pledges a year ahead of time and bring them to a summit he has organised for 23 September.

EU climate commissioner Miguel Arias Cañete has said current policies have the bloc on track to beat its 2030 target, meaning the EU “would be in a position” to increase its Paris goal.

But Juncker said: “The objectives are clear: climate neutral in 2050, in the midway steps to be taken by 2030. It’s up to the member states to put these into reality.”

Climate change and Guterres’ summit are on the agenda for a European Council meeting next week – Juncker’s last as commission chief. It will be the last chance for leaders to discuss adopting new goals for 2030 and 2050 before Guterres’ meeting.

Juncker said the council would “take climate change inside the cortège of political priorities”.

The commission’s official policy is to revise its 2050 goal, setting a new mark of net zero. Juncker backed this target, which has not been adopted by member states.

In May, an 8-country coalition comprising France, the Netherlands, Belgium, Sweden, Denmark, Spain, Portugal and Luxembourg signed a paper calling on the EU to hike its ambition to carbon neutrality by 2050. On Tuesday, the UK stepped ahead of all other major economies by committing to end its contribution to warming by the middle of the century.

Absent from the appeal were Germany, Poland and Italy. But Angela Merkel, whose Christian Democrat party is now under growing pressure from the Greens, has since asked her cabinet to explore how to go net zero by 2050 at a domestic level.

In November, Cañete described Europe’s targets as “clearly not sufficient to meet the long-term temperature goals of the Paris Agreement”.

“This is why going climate neutral is necessary, possible and in Europe’s interest,” said Cañete.

Juncker and Cañete are in the final months of their term at the head of the EU’s executive body. A new commission will be confirmed in the autumn.