‘If not us, who?’ Failure of representation drives youth climate strike

As a movement grows across the world, young people say they want politicians to protect their interests 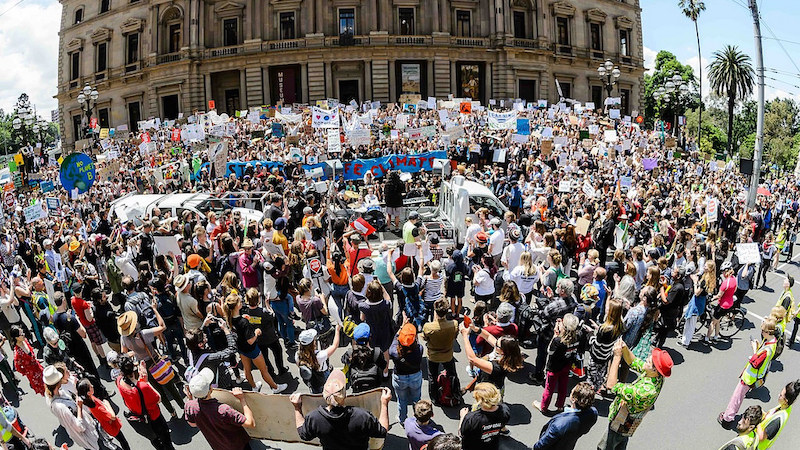 It had been a day for grown-ups to show climate leadership.

On a cold 25 January, Germany’s coal commission gathered at the federal ministry for economic affairs and energy in Berlin to decide the future of coal in the country. Outside, armed with signs, stood an estimated 5,000 students.

Fridays for Future (F4F), the student-led movement for school strikes for climate on Friday, had announced their plans to demonstrate weeks ago. Peter Altmaier, the minister of economic affairs and energy, had asked whether he could address the rally – in vain. Instead, Altmaier had to content himself with a meeting with three representatives, Luisa Neubauer, Jakob Blasen and Carla Reemtsma, shoehorned before the start of the demonstration.

That feeling of being unrepresented by elected officials has driven tens of thousands of young people into the streets, around the world, in recent weeks. In Belgium, where some of the biggest strikes have taken place, 30,000 students took the streets on 7 February. The following day, pupils demonstrated across at least 35 cities in Germany, campaign group 350.org reported. Now, youths in the UK are staging a national day of school strikes on Friday 15 February, with many abroad having committed to protest in solidarity. Meanwhile, preparations for a global strike for climate on 15 March are gathering apace.

“I’m unable to vote, and this is going to be the biggest issue that’s going to affect me in my entire life,” 17-year old Lottie Tellyn from Hampshire, UK, says. Like many, Tellyn heard of the climate strikes in the past weeks and will be travelling to London to march on Friday. Her entire philosophy class will be with her, she says.

All of the students CHN interviewed spoke about the influence of Swedish 16-year old Greta Thunberg, whose pigtails and determined air have become a globally recognised figure in recent months. Thunberg first started to skip school in September. Every Friday, she sat in front of the parliament in Stockholm to demand that her country meet its Paris goals. At first alone, until journalists took an interest in her. Today up to 200 people accompany her every Friday. She has made impassioned speeches at UN climate conferences, calling out the hypocrisy of leaders who claim to love their children and then do nothing to avert a climate disaster.

“It really spoke to me,” 14-year old Zoe Bonnet from Bristol, UK, says of a video of Thunberg she saw in January. “I was like: ‘What?! She’s only 15 or whatever. How can this be? Maybe I could also do something a bit like that.”

Thunberg, who has Aspergers syndrome, frequently says that her condition has led her to view the world in black and white, making it easier for her to draw the battlelines on climate policy. “Either we prevent 1.5C of warming or we don’t,” she told the gathering in Davos in a widely circulated speech in January “Either we choose to go on as a civilisation or we don’t. There are no grey areas when it comes to survival.”

The same goes for much of her generation, Bonnet says. “For young people it’s much easier to see things in black and white. Either we save the world and we stop the climate crisis, or we don’t. Seeing how slowly everything moves in politics, you think: ‘If not us, who?'”

The daughter of two ecologically-minded engineers, Bonnet has long been aware about the environment, diligently switching off lights and shortening her showers. But she describes the school strikes as “a little bit out of [her] comfort zone,”. Likewise, her father, who builds wind mills and heads a sustainability group in Hertfordshire, could hardly be qualified as an activist. Her parents are “more at the gentle end of the scale,” she says.

In addition, while students interviewed by CHN showed sympathy towards civil disobedience groups such as Extinction Rebellion, most did not want to participate. 17-year old Sara Henssen, from Dusseldorf, Germany, “really admire[s] what they’re trying to do” but doesn’t “want to go full-on right now when I’m still 17″.

School strikers also fiercely defend the grassroots nature of their movement, amid claims that they are being manipulated by green groups. One of Belgium’s environment ministers, Joke Schauvliege, said that the national secret services had told her that the strikes were a “setup” and not “spontaneous actions of solidarity with our climate”. Schauvliege eventually stepped down after confessing the intelligence services had told her no such thing.

Fifteen-year old George Bond, from Dorset, UK, admits Greenpeace has helped the group with press strategy. But “they’re just offering us advice and support as they do to many smaller movements”, he says. In Germany, Tennie says that F4F has rejected invitations to collaborate with the anti-coal group Ende Gelände (Land’s End), opting instead to inform students of its events.

Aside from adults, school strikers also face the challenge of convincing their peers to support the cause. Bonnet recalls a conversation with one of her friends who was studying on her exams. “Are you excited about the future and what your exams could lead to?,” she asked her. “I don’t think she knew where it was going. So I said: ‘Well, due to climate change, we could not really have a future on this planet where any of those careers you’re being told about are possible in 50 years’ time. Why should you be really thinking about that, when there are more important things at stake?’”

She described the exchange as “a bit of an unsatisfactory conversation. She said: ‘Ah, Zoe!’ and started scrolling through her Instagram.”

Henssen similarly admits to sparring with her 18-year old brother over the strike.  He “says I’m dreaming, that I’m not realistic, that we’re over-exaggerating.”