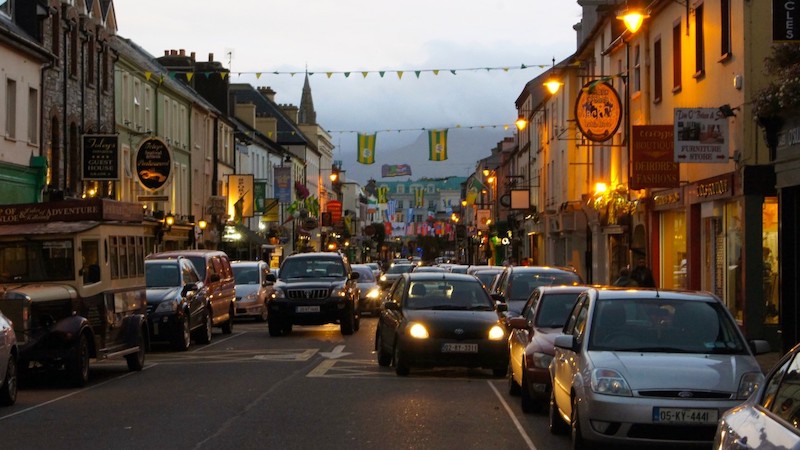 Traffic in Killarney. Oil and gas supplies 97% of Ireland's energy demand for transport, according to the offshore operators' association (Photo: Commons/Free)

By Sara Stefanini in Dublin

Brexit puts new pressure on Ireland to find and develop its own oil and gas supplies and reduce its reliance on British imports, the country’s offshore hydrocarbons industry argues.

Ireland imports all of its oil and around a third of its natural gas – mostly from the UK – and the gas imports are set to rise as the country’s offshore Corrib reserve runs out over the next 12 years, according to the Irish Offshore Operators’ Association (IOOA).

Now, uncertainty around Britain’s future relationship with the EU is adding urgency to the industry’s calls for drilling and infrastructure projects that can bolster Ireland’s energy independence.

“Ireland’s geographical location at the edge of Europe makes us extremely vulnerable to any potential disruption to energy supplies,” Pat Shannon, the IOOA’s chairman, told Climate Home News. “Brexit increases energy security concerns, and post-Brexit, Ireland will not have a direct connection to the main EU energy infrastructure.”

The association published a report in January highlighting Ireland’s reliance on foreign oil and gas. It noted that even its biggest supplier, Britain, depends increasingly on imports from the European Union, Norway and Russia.

A disruption in these energy supplies would be costly for Ireland, the report warned. A year-long interruption of Russian gas to Europe would push up the country’s gas prices by 23% and electricity prices by 15%, while a total blackout would cost around €850m per day.

“Developing indigenous oil and gas would provide greater security of supply for Ireland in the context of global geopolitical uncertainty, including Brexit,” Shannon said.

The industry association has been discussing these risks with Ireland’s local and national governments and other stakeholders since Britain’s June 2016 referendum.

Oil and gas explorers will “likely” drill at least one new well in the deep Irish waters this year, with more being prepared for 2020 and 2021, Shannon said.

“Irrespective of the manner in which the UK departs from the European Union, IOOA believes it is vitally important for Ireland to secure its own indigenous energy supply as we transition to a low-carbon economy,” he said.

That said, peat and coal only accounted for a combined 13% of Ireland’s total energy use in 2017, while oil and gas dominated with 78%.

New investment in domestic oil and gas would also put Dublin in an awkward position, after lawmakers voted last summer to make the country the first to fully divest its sovereign wealth fund from fossil fuels. A cross-party parliamentary committee is now debating recommendations for broad new policies to tackle climate change, as the country struggles to limit its emissions.

“This industry is like an addict, it just wants one last fix, and it will tell you anything and do anything and try anything to get that fix,” Ryan, a former energy and natural resources minister, told CHN. “They’re chasing the dragon, they’re chasing the wrong way. We should be using Irish waters to develop offshore wind farms… that’s what has to change to take the climate seriously, and Brexit is not going to change that one way or the other.”

Brexit is not expected to immediately disrupt Ireland’s oil, gas or electricity trade with its neighbour, even if it’s a hard, no-deal departure on 29 March.

The World Trade Organization does not apply trade tariffs to power or crude oil, and only 0.7% to gas. Plus, Britain and Ireland also have bilateral agreements on their gas trade outside any EU arrangements, noted Paul Deane, an energy research fellow at University College Cork.

Nonetheless, Brexit has “refocused attention” on Ireland’s import reliance, Deane said. Wind and other renewables are growing, but gas still covers about half the power demand.

Brexit uncertainty is one factor that helped revive plans for the stalled €1 billion Shannon liquefied natural gas import terminal on Ireland’s west coast, when a US equity firm stepped in to buy it last year.

The project’s prospects are also boosted by the availability of new, cheaper technology to receive cargoes offshore rather than onshore, but its future now depends on the outcome of a legal challenge from environmental groups. The High Court is expected to decide on Friday whether the new owner can start building, or has to apply for new planning permits, or must drop the project entirely.

An earlier version of this article erroneously said Shannon LNG terminal was bought for €1 billion last year. In fact €1bn is the estimated cost of the project.