EU set to tighten rules on palm oil for biofuels

Indonesia and Malaysia say the EU measure will unfairly disadvantage their crops, while environmentalists worry it won’t be tough enough on deforestation 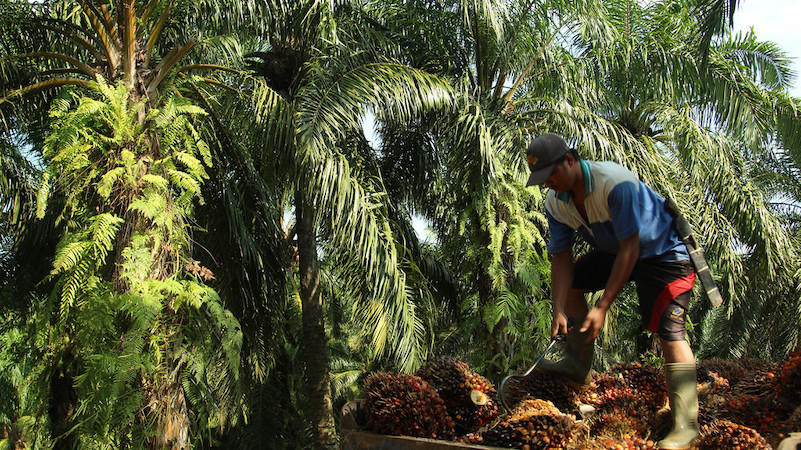 The European Commission will meet on controversial rules this week to limit the use of biofuel crops linked to deforestation – amid backlash from the world’s two largest palm producers.

The new rules will define which fuels can be counted toward EU renewable energy targets. Biofuels that indirectly lead to changes in land use and higher greenhouse gas emissions will be excluded by 2023.

EU commissioners will discuss the legally-binding act in a meeting on Wednesday, commission spokeswoman Anna-Kaisa Itkonen said. It comes a few days after the 1 February due date. If it is adopted, the European Parliament and member countries will have two months to give any objections before it’s finalised.

If the commission chooses tough criteria could significantly limit one of Indonesia’s and Malaysia’s biggest exports – palm oil.

The Indonesian and Malaysian governments and industries have long criticised the EU’s push to tighten its biofuels criteria.

“The proposed ban is clearly an act of discrimination,” Malaysian foreign affairs minister Saifuddin Abdullah said in a statement in January. “Malaysia is committed to producing sustainable palm oil … every drop of palm oil produced in Malaysia will be certified sustainable by 2020.”

Jakarta, meanwhile, plans to lodge a complaint with the WTO on the grounds that the EU directive will unfairly target palm oil in favour of European commodities like rapeseed oil, Reuters reported last week. On top of that, the government is reviewing its relations with the EU and urging southeast Asian neighbours to hold off on any plans to upgrade their relationship with the bloc, it said.

Brussels countered that the rules will comply with its WTO obligations. “The commission will make sure that any necessary implementing rules are fair, balanced and based on solid scientific evidence to ensure that the achievement of the EU’s renewable energy goals goes hand in hand with the fair and rules-based international trade regime that we so strongly defend,” Itkonen said.

Germany to quit coal by 2038, under commission proposal

The EU has also stressed that it does not intend phase out palm oil-based biofuels by 2030 entirely. Instead, palm oil and other crops will have to pass new “objective and non-discriminatory” criteria in order to qualify as low-carbon and renewable sources of energy, the EU’s ambassador to Indonesia, Vincent Guérend, wrote in a letter to the Jakarta Post in November.

“The Union remains a large, open market for palm oil,” Guérend wrote. “If it failed to pass these criteria, palm oil imports would still be possible under current condition, except European member states could not count it as ‘renewable energy’ anymore.”

The EU is working with the Indonesian government to see how its palm oil can comply with the coming rules, with about four years to prepare, he added.

The extent to which food-based biofuels should count as renewable energy was one of the most contentious issues in the EU’s negotiation for the 2021-2030 policy.

Environmentalists argue biodiesel made from palm oil is the worst type of biofuel, followed by soy. According to the NGO Transport & Environment (T&E), biodiesel releases three times the greenhouse gas emissions of fossil fuel diesel, once land use is taken into account.

Their concern now is that some palm oil production will count as lower-risk crops that can still be imported for fuel, said Nico Muzi from T&E. “That for us is the loophole, the wide-open door, for green-washed palm oil. All the fight will be around that – how big that loophole will be.”

However, not all palm oil production causes deforestation, and sustainability rules need to recognise the differences from country to country, said Gernot Klepper, a senior researcher at Germany’s Kiel Institute for the World Economy. There is still extensive tree loss and illegal cutting in Indonesia, but much less now in Malaysia. Colombia’s palm oil, instead, is produced in plains rather than forests.

Rules that allow producers to qualify their crops as the lower-risk feedstock can incentivise them to become more sustainable, he said. On the other hand, banning palm oil outright – which the Commission does not intend to do – would hurt more sustainable producers as well.

Norway and France have moved ahead of Brussels to clamp down on deforestation.

Norway committed in 2016 to making sure the supply chain in its public procurement is deforestation-free and included the plan in its budget last autumn. Malaysia quickly warned it would affect its trade relations with the European Free Trade Association.

France announced in November that it will stop imports of palm oil, soy, beef and other products linked to deforestation and unsustainable agriculture by 2030. Malaysia again responded, with prime minister Mahathir Mohamad telling president Emmanuel Macron that the government would consider restricting imports of French products, Reuters reported.

NOTE: This article was amended to indicate that the rules may not be finalised at the meeting this week.