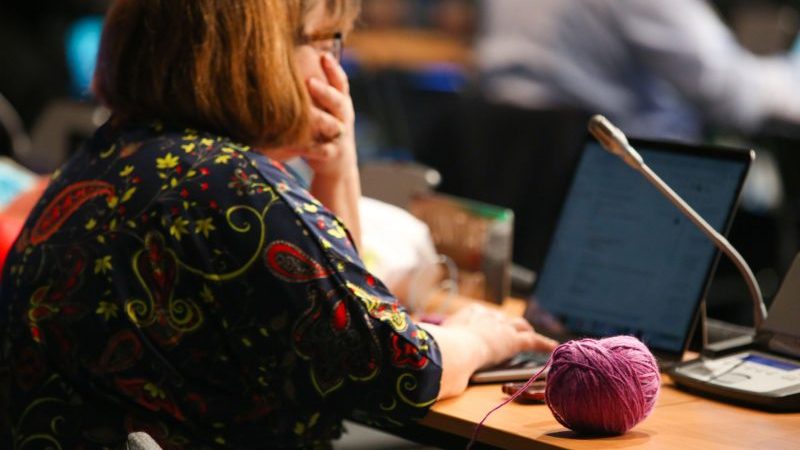 A delegate at Cop24 climate talks in Katowice, Poland (Pic: IISD/ENB | Kiara Worth)

As new draft negotiating texts trickled out on the Paris rulebook on Wednesday and Thursday, the finance elements were among the last to drop.

Progress is dragging amid wrangling over how finance flows from rich to poorer countries are counted, reported and locked in for future, reports Sara Stefanini.

“We are not there yet,” said Jo Tyndall, one of the co-chairs of the talks, at a plenary session on Thursday evening. She and her fellow officials were going to start a “final push”, suggesting solutions to troubled areas, to be drafted overnight and released Friday.

Many parties expressed concerns about the latest version, so a further whittling down is sure to provoke more complaints.

“We cannot reflect all views of parties in the documents we prepare,” said Tyndall, pre-empting dissatisfaction. It was “imperative” that they reflect “a balance of interests,” she added.

Negotiators only have until Saturday before ministers fly into town. At that point, they will hand over the text they have been crafting for months to their political bosses in the hope they can find a deal.

Civil rights activist Katherine Egland lived under segregation as a child but saw it revive in the aftermath of Hurricane Katrina.

Defending coal miners has been a key theme of Cop24, mostly based on social justice arguments.

Polish trade union network Solidarity has instead opted to attack the inconvenient science driving efforts to phase out coal.

The Gilets Jaunes (Yellow Jackets) protests in France have raised questions over whether a planned climate march through Paris on Saturday will go ahead.

After all, the movement sprang from opposition to a diesel tax hike – an environmental policy the government was forced to suspend, then cancel.

But the march organisers told Le Monde they want to merge their agendas. “The problems at the end of the month and the end of the world are not different, they raise the question of the economic model,” said Cyril Dion.

US president Donald Trump did not miss an opportunity to troll his French counterpart, tweeting that protests against rising energy prices showed the Paris Agreement was “fatally flawed”.

Laurence Tubiana, an architect of the Paris Agreement and head of the European Climate Foundation, begged to differ. “The #YellowVests protests in France are not against #ClimateAction, they are a wake-up call for #SocialJustice,” she tweeted.

“There’s no viable solution to reducing emissions on the scale needed in France without an increased price on carbon so ultimately this needs to be reinstated,” said Pierre Cannet of WWF-France at a press conference in Katowice. “France now has an opportunity to get it right by bringing people into the discussion.”

Idly flicking through Tinder, a friend of the Katowice brief matched with a Saudi delegate. Then the other party swiped left. Perhaps after they read “journalist” in the bio. Better luck next time.

Thursday marked 30 years since the UN general assembly adopted its first resolution on climate change, which – among other things – endorsed the establishment of the Intergovernmental Panel on Climate Change.

When Malta put it on the agenda, few predicted how fraught and protracted attempts to tackle the problem would become.

Our rundown of 37 things you need to know about 1.5C global warming is now available in Polish, thanks to Krytyka Polityczna.