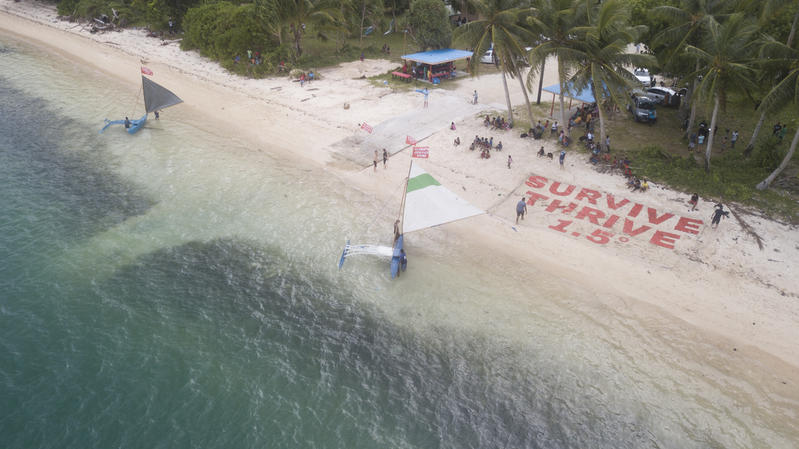 Marshallese activists on the coast of the nation’s capital Majuro urge leaders to upscale climate action, ahead of a "virtual summit" run by the Climate Vulnerable Forum (Photo: © Martin Romain / Greenpeace)

The Marshall Islands submitted the first updated national climate plan to the UN climate body, urging others to follow by 2020.

Both are members of the Climate Vulnerable Forum (CVF), an informal grouping of 48 countries hit hard by the impacts of global warming.

“The injustice of climate change is that the impacts are felt first and hardest by those with the least responsibility for its causes. Vanuatu is on the front lines of climate change and yet we have benefited least from the exploitation of fossil fuels that has caused it,” said Regenvanu.

“I am therefore today putting the fossil fuel industry, and the states that sponsor it, on notice that the climate loss and damages ravaging Vanuatu will not go unchallenged. My government is now exploring all avenues to utilise the judicial system in various jurisdictions – including under international law – to shift the costs of climate protection back onto the fossil fuel companies, the financial institutions and the governments that actively and knowingly created this existential threat to Vanuatu.”

Vanuatu lost 64% of its GDP in a single 2015 tropical storm, Regenvanu said, arguing the profits of polluting companies should go to alleviate its suffering. He cited research attributing around two thirds of historic greenhouse gas emissions to 90 coal, oil, gas and cement companies.

A special report from the Intergovernmental Panel on Climate Change (IPCC) last month warned the world is on track to exceed 1.5C of global warming between 2030 and 2052. That has drastic implications for small island states, which are exposed to sea level rise, intensifying tropical storms and the loss of valuable coral reef ecosystems.

Ian Fry, climate ambassador for Tuvalu, told Climate Home News he had had “a flurry of interest from legal sources suggesting this is an ideal opportunity to take legal action” since the report came out. The country has a “watching brief” on the matter but faces “resource challenges”, he added.

Climate litigation is a growing field, as the gap between science-based goals and action widens. Lawyers are testing a variety of arguments, from human rights to fiscal responsibility, in the courts.

Greenpeace praised Regenvanu’s announcement. “In a world full of political short-sightedness and cowardice, we need clear political and moral leadership,” said executive director Jennifer Morgan. “Communities impacted by climate change are standing up and demanding that those responsible finally be held to account. We stand in solidarity with these communities all around the world.”

The Marshall Islands, which has just taken over the chair of the CVF, is taking a less confrontational approach. Despite its tiny contribution to global emissions, it is seeking to set an example with a rapid transition to clean energy. “We believe in leading from the front,” said president Hilda Heine.

Under the Paris Agreement, countries submitted national climate targets to the UN. Recognising these were collectively inadequate to meet global temperature goals, the deal set out a five-year cycle for ratcheting up ambition.

Majuro is leading the drive to revise national climate plans before 2020. Its updated version makes binding a target to cut emissions 45% from 2010 levels by 2030 and adds an indicative target to go to 58% by 2035, on a straight line to net zero in 2050.

Those goals are subject to domestic consultation and the availability of financial support.

CVF leaders also released the “Jumemmej declaration“, based on a Marshallese concept of permanent vigilance, such as seafarers need on an ocean voyage.

It urged countries negotiating at next month’s Cop24 climate summit in Katowice to act on the findings of the IPCC special report. Members of the group committed to increasing their own levels of ambition by 2020, “to keep the 1.5C warming limit within reach”.

The group also called for action to unlock climate finance flows for the poorest and most vulnerable countries.