The authorities have bulldozed 2,000 buildings in a bid to prevent flooding, but garbage-choked rivers still overflow each rainy season, putting citizens at risk 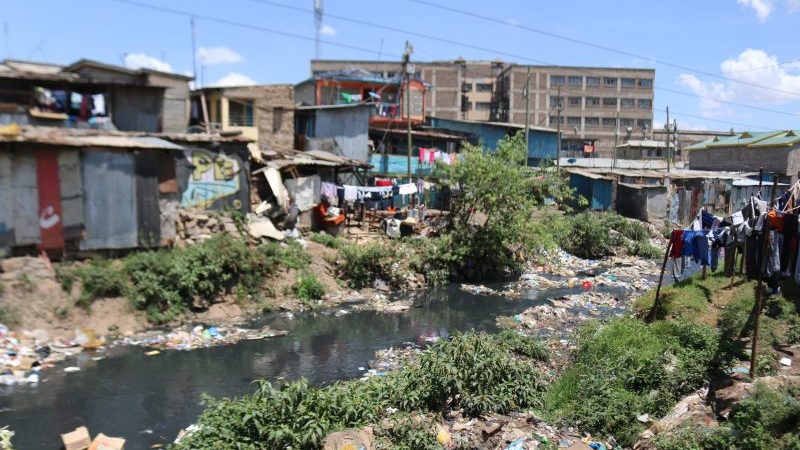 Buildings are encroaching on the river banks, raising the risk of flooding (Pic: Sophie Mbugua)

By Sophie Mbugua in Nairobi

In August, the authorities took drastic action, bulldozing around 2,000 buildings in the flood plain, including shopping malls worth millions of dollars. After a lull, they are due to resume demolitions this month, national media reports.

At Hazina village, one of 22 villages in south B division along the Ngong, the river chokes with refuse, making the water hardly visible.

“It’s the village’s dumping site,” Anne Keli, a 46-year-old mother of 12 tells Climate Home News. She has lived in the village for two decades and says flooding has been particularly bad in the past two years.

“The water reaches the village at a high force compared to previous years but gets stuck due to the plastics, paper bags and assorted waste in the river, blocking its flow,” Keli says. “Since we are on a lower area, the run-off from higher areas headed to the river has no place to go as the river is full. So, where else does it go? Into our houses.”

During the long rains in April, Keli’s family left their flooded home and camped in the county commissioner’s grounds. She lost around 30,000 Kenyan shillings ($290) worth of goods from the shop she runs less than a kilometre from the river.

The provincial administration made some efforts to clean the river during the flooding, but as soon as the rainy season ended it clogged up again, Keli says. “People keep building close to the river, reducing its size by day. People are asked to remove the structures with every flood but after the rains, everything moves back to normal.” 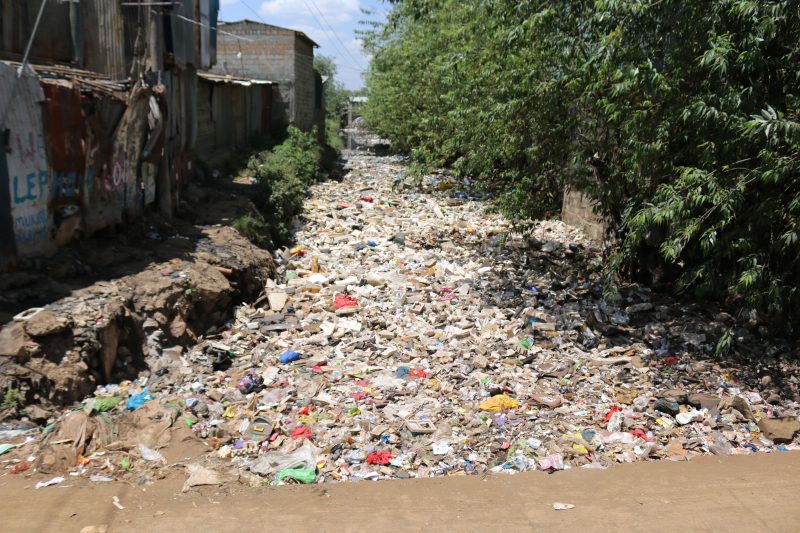 The Ngong river is choked with garbage as it passes through Hazina village (Pic: Sophie Mbugua)

Kenya Meteorological Department (KMD) has installed more than 72 monitoring stations across the country in a bid to provide more timely and precise information.

“We hope to respond before flooding happens, and collected data will inform the disaster policy and interventions as we will compare long term data showing at what rainfall levels has certain areas flooded,” explains Chunguli.

Mary Kilavi, the Nairobi County director of meteorological services, is mapping the areas likely to flood in Nairobi given a specific amount of rainfall. South B and South C on the Ngong river are hotspots, along with Mathare by the Nairobi river.

“We are using a model that simulates surface water flooding using previous city flooding data corrected over time,” she explains. “We want to find out with a specific amount of rainfall, which areas will flood.”

This will help the authorities to move beyond a reactive approach to systematic preparation, she says. “Since weather is given in probabilistic terms, systems don’t act fast. We will establish the probability of achieving the estimated flood causing rainfall, then with stakeholders, agree at what point to act, the actions to take and funds to be set aside for the actions.”

The solutions range from cleaning up waste to creating green urban spaces and changing land management upriver. Many of these face political, as well as practical, obstacles.

There is a directive against building within 30 metres of the riverside, for example, but it is haphazardly enforced. Many owners of the recently demolished structures insisted they had permits to build there.

“It requires funds and land to relocate and rebuild the structures amid political interference, as area politicians incite the residents not to move,” says Barre Ahmed, assistant county commissioner for Starehe sub county.

Dr Lawrence Esho, chair of the Kenya Institute of Planners, calls for a drainage master plan to cover the entire metropolitan area.

“We have a flooding crisis but the issue is bigger than the illegal buildings. It is more of the uphill destruction of land which we are doing nothing about, too much concrete pavements aggregating the run off flow, blocked drains and climate change,” says Esho. “Over the last 20 to 25 years the city has also gone through the change from bungalows built over a huge area to high-rise apartment blocks… without a drainage city master plan change.”

Builders should leave gaps between pavements for grass “to allow the water sip under when it rains,” he advises.

In the meantime, Keli can only make sure she has a quick exit strategy ready. She says: “I worry at every drizzle. But this time, I am prepared with a bag packed for any eventuality to rescue my children. As for the shop, there is little I can do. Until the river is cleaned, I still believe this village will flood if the rain keeps coming as they did these two years.”