In April, three hours of torrential rain destroyed buildings and killed 12 people in Huruma Estate. The risks are only mounting 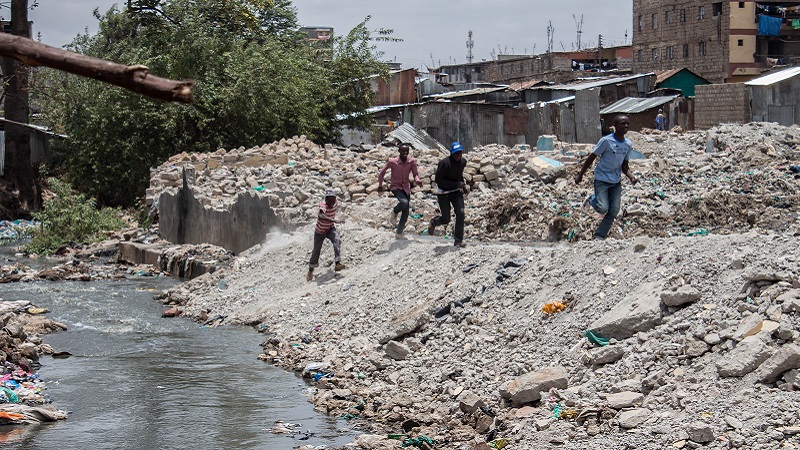 When Anthony Mwangi and his team found a baby girl buried under the rubble, they could barely believe she had survived three days in a collapsed building.

The baby’s home came down around her when flash floods struck the outskirts of Kenya’s capital Nairobi. She was found in a basin, perhaps put there by her mother while she attended to domestic work. It might just have saved her life.

Later identified as Delarine Saisi Wasike, the six-month-old had a lucky escape from the Huruma Estate disaster in April this year. At least 134 others were injured and 12, including the baby’s mother, were killed. 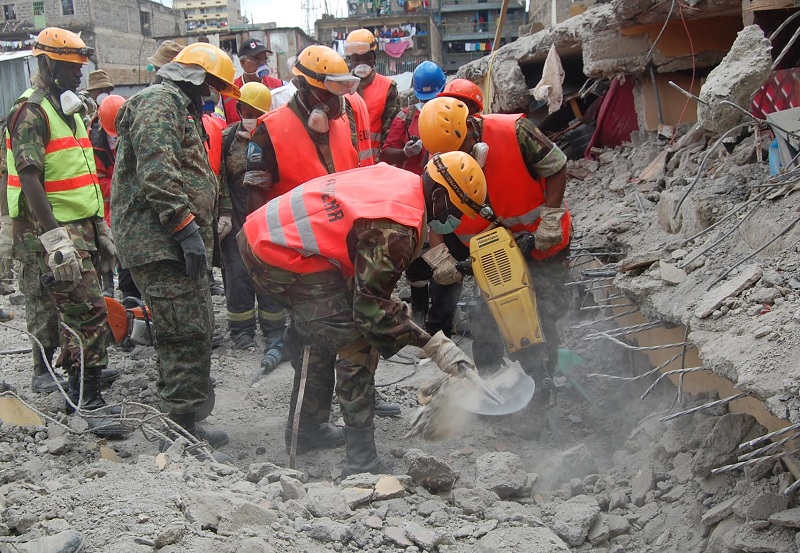 Mwangi, who was part of the Kenya Red Cross unit that arrived first to the scene of devastation just 20 minutes after the collapse, said the incident was so much worse because of the timing of the floods.

“It all happened around 9PM, when people in Kenya would normally be at home, after dinner,” he says. That meant the majority of the 200 residents were at home at the time. 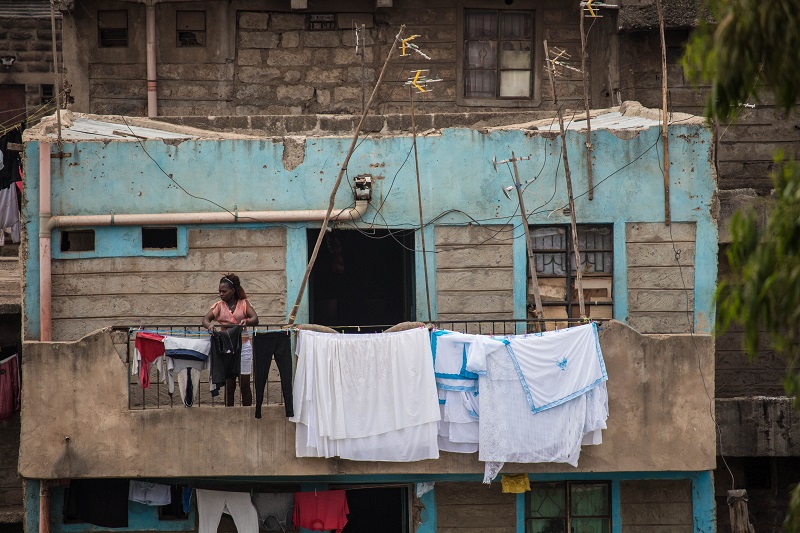 “Luckily, the building shook just minutes before going down, so many fled in time to avoid the worst,” he says. “Others weren’t as lucky.”

Last year’s El Nino had a huge impact on Kenya with violent rainfall, landslides and mudslides that destroyed infrastructure and swept away livestock. According to the UN, the heavy rains intensified in late April, affecting nearly half a million people in the East African region. In Nairobi, the urban poor had to face the double whammy of erratic weather coupled with poorly constructed buildings and unregulated, unsafe settlements.

Six months later, I visited Huruma to see how people were coping. 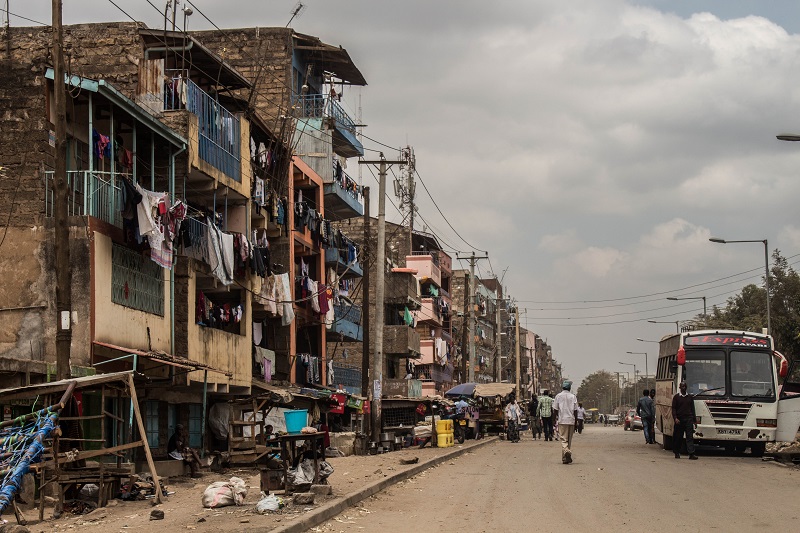 Samuel Obera Onguto is a Huruma resident, and remembers that day well. “It rained very heavily for hours, and after that the lives of most people in Huruma were put on hold. Poor children whose parents don’t have a car could not go to school for three months, because the roads were damaged,” he says as we walk through the dusty roads of the neighbourhood.

Around us, most buildings are decrepit, with frameless windows like empty black eyes. I ask Samuel if all of this is down to last spring’s floods. “No, these buildings are built with cheap materials and just crumble”. 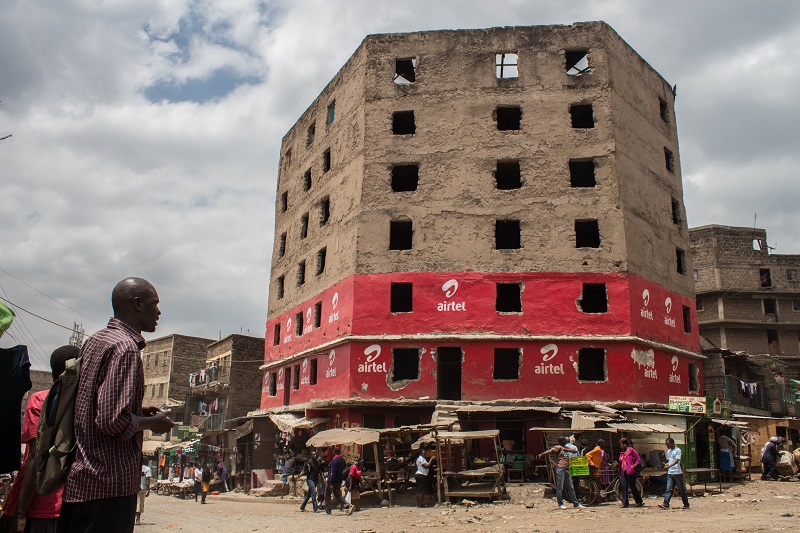 The government found some of the structures to be so insecure that it ordered they be demolished. But people keep living there because they have nowhere else to go, and the landlords still collect their rent.

Both Obera and Patrick Agengla Nyegenye, another resident we meet along the way, agree that infrastructure in Huruma is so poor that people have no protection in case of extreme events. They hold the government responsible for the situation: “Kenya is riddled with corruption. The government sells the land concession to private builders who choose sub-standard materials to save money,” Nyegenye says.

He and Obera agree that the government should directly take care of building quality structures and then sell the finished homes to people. “The government has plans,” says Obera, “but these plans and regulations are never enforced, unless an election is coming up. Right now they are going to erect small buildings to show that the government is doing something.” 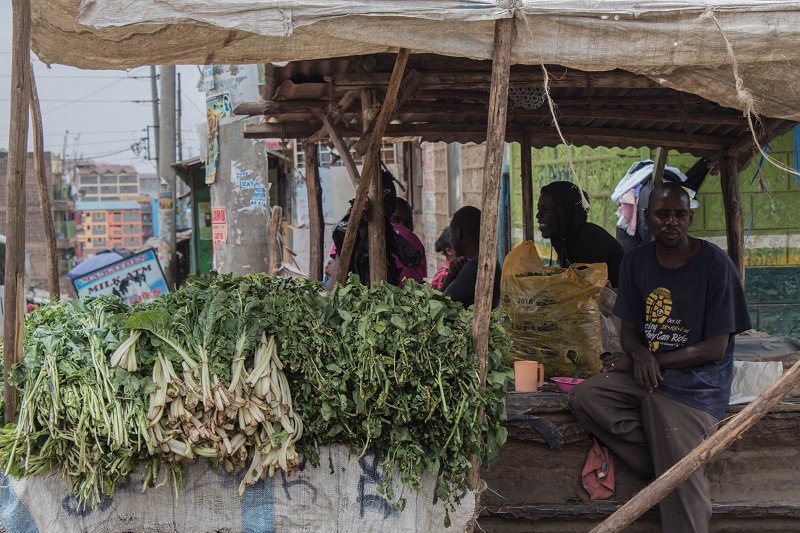 Walking towards the slum part of Huruma, people express a sense of impotence in the face of seasonal floods.

The UN’s climate science panel tentatively foresaw in its last assessment report a rise in flash flooding risk for Kenya, as global temperatures rise. Models show an increase in bouts of heavy rainfall for East Africa, although the data is too patchy for strong predictions. In any case, the growth of cheaply built housing near rivers means more people are exposed to extreme weather.

The residents see the weather becoming more erratic by the year and they feel left alone by the authorities. Both the buildings and the informal settlements are extremely insecure, and the slum stretches right next to the riverbanks, its shacks prone to be wiped out as soon as the river swells. 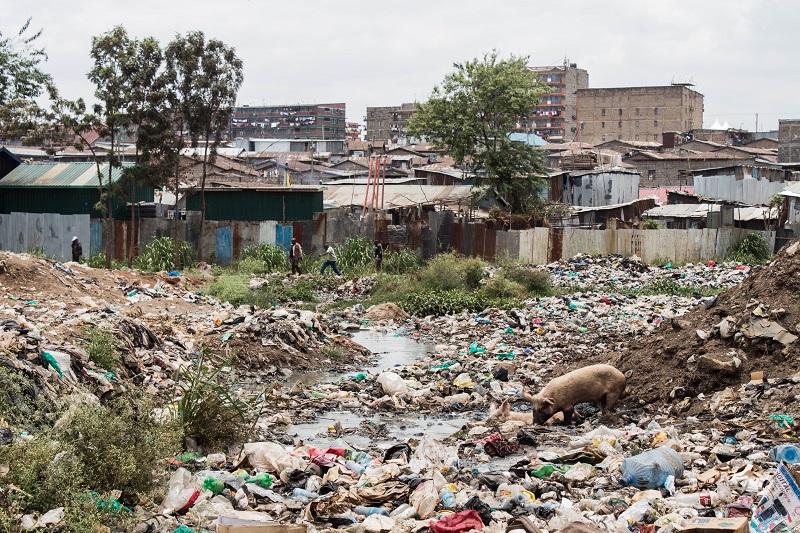 “[The poor] who live in urban areas have been neglected consistently and that continues to be true with climate change, which is a new area of concern,” says Sarah Colenbrander, a researcher at the International Institute for Environment and Development (IIED).

The way extreme poverty is defined (having less than US$1 a day) can fail to capture the struggle of the urban poor. They may have a bit more money, but their quality of life can be worse than that of those who live in rural areas.

Improving adaptation in urban areas is becoming an increasingly urgent issue, says Colenbrander: “A growing proportion of the population lives in urban areas and by 2050 more than half of the people in Africa will live in cities.”

She sees the growing density of urban population as an opportunity to get things right quicker: “[In cities] you can provide essential infrastructure such as draining, sanitation and drinking water in a way that is climate resilient, where you can serve more people with the same amount of investment.” 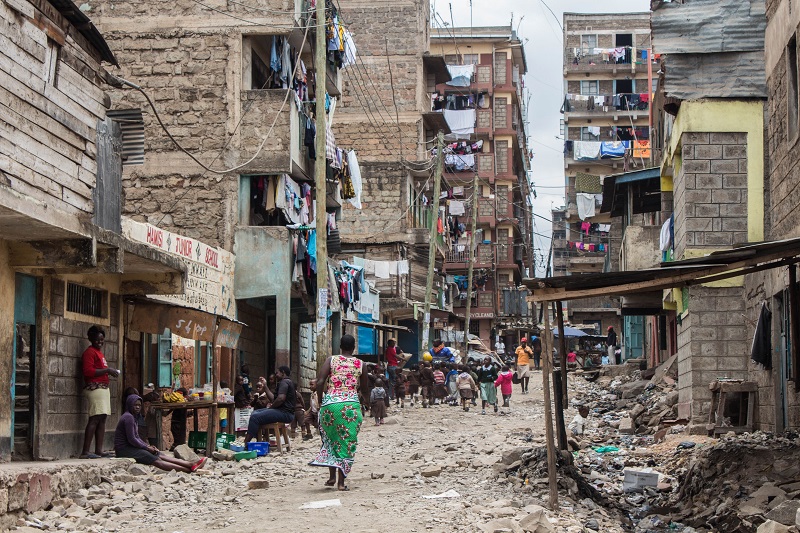 For now, Huruma’s slums lack basic safety measures and the shacks, with naked cables hanging over water puddles from the last bout of rain, are full of hazards. Charities are trying to introduce a few safe homes made of bricks, but those we see seem half built and already deteriorating in the sun.

For those who have been displaced by the floods, there is little hope. “Currently they don’t have an alternative, the authorities are just demolishing the houses that still stand but are at risk. People have lost everything and have no safeguards. They are back at square one,” says Obera.

We get to see what remains of the collapsed building, a tall dune of fine rubble. A group of boys playing tag rushes through and disappears over the horizon. 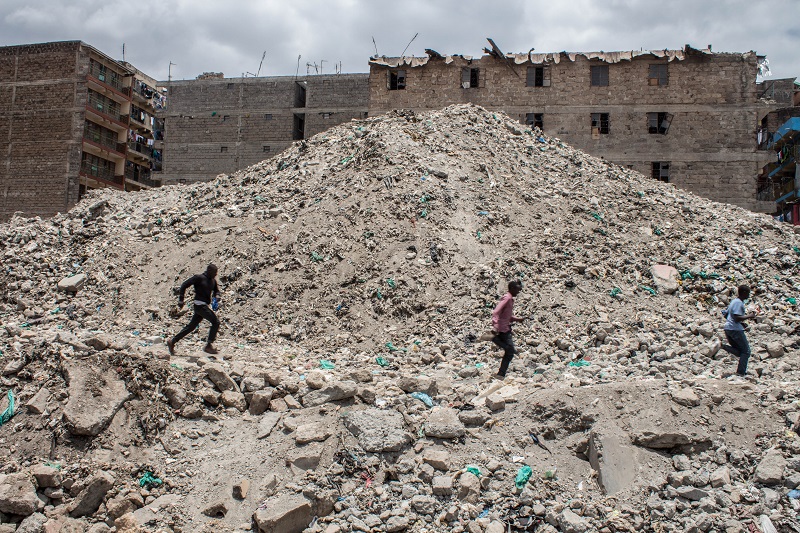 If nothing changes, the situation in Huruma can only deteriorate, with the damage left unfixed and the mounting threat of climate change. Last spring’s floods were linked to a wicked El Nino, which is not caused by climate change, but could have been exacerbated by rising temperatures.

“El Nino comes around regularly, and when you have climate change accelerating as well, that combination is going to be very pronounced,” says Colenbrander. 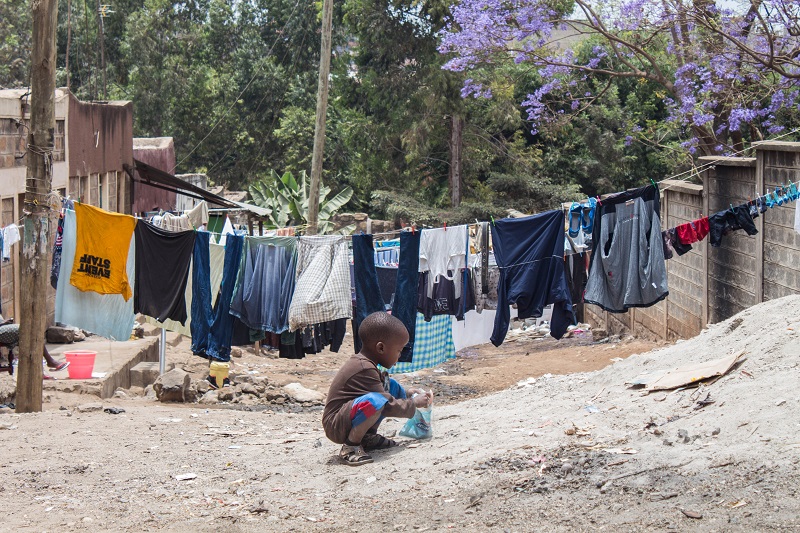 But something is slowly moving. Associations of slum dwellers, who negotiate with the city council to address their problems, are now putting climate change at the top of their agenda. Groups such as Muungano wa Wanavijiji (Swahili for “United Villagers”) are raising awareness and calling for the government to help climate-proof their communities, with better drainage systems and more robust buildings.

Preventing the worst impacts of floods in slums can be straightforward – just a matter of improving basic infrastructure – but it can lead to long lasting benefits.