With just 122 days until a major UN conference in Poland, leading diplomats say the pace of talks must speed up 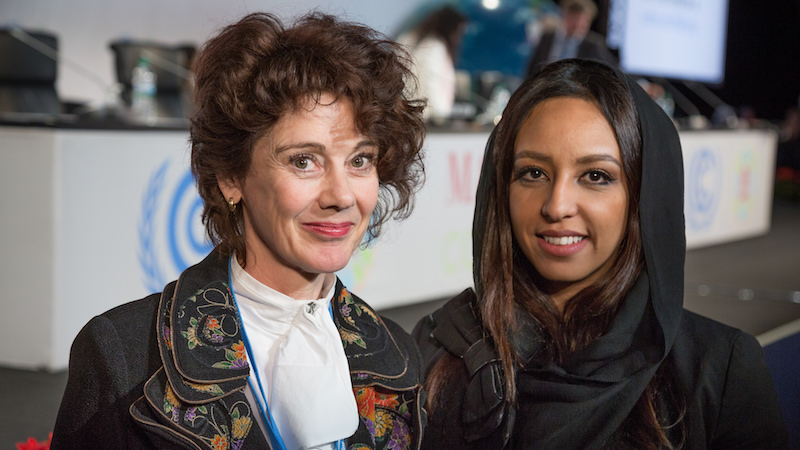 Jo Tyndall and Sarah Baashan, chairs of the 'APA' talks on the Paris Agreement (Photo: UNFCCC/Flickr)

Climate negotiators need to “crank up the pace” on writing the rulebook for the Paris climate pact, a co-chair told Climate Home News as plans to streamline the process were published this week.

Jo Tyndall, the New Zealand diplomat leading talks alongside Saudi Arabia’s Sarah Baashan, said there had been “good progress” at the May meeting in Bonn.

However, she added, “there seems to be a disconnect between the amount of time we have available and the scale of the remaining work that needs to be done”.

There is one more technical session scheduled in Bangkok next month before the main UN climate summit of the year in Katowice, Poland, where ministers are due to finalise the rulebook.

Tyndall’s comments came as the co-chairs and officials from several countries published “tools” on the UN Climate Change website to help navigate the diverse range of proposals.

The tools are a halfway house between the existing mess of hundreds of pages of suggestions from various negotiating blocs and a formal negotiating text that could form the basis of talks in Poland. The documents clarify the options for each area of the negotiations.

“We’re looking to inject as much consistency as possible,” said Tyndall. “The tools aim to help parties get maximum value out of their time in Bangkok, by assisting with the readability and narrative of the informal notes, but without taking any options off the table.”

Under the Paris Agreement, countries committed to voluntary national climate goals, with the ultimate aim of holding global warming “well below 2C”.

Noting that these voluntary pledges were collectively insufficient, the pact also established a five-yearly cycle to ratchet up ambition.

The task now is to fill in the details: how to monitor greenhouse gas emissions; how to deliver promised climate finance from rich to poorer countries; how to make the review process effective and fair.

“Bangkok really needs to deliver an agreed basis for negotiation for all items on the work programme. We will want to see options being narrowed down, and draft decision text being reflected, wherever possible,” said Tyndall.

While highly technical, these choices have a political dimension. The main sources of tension are money and how much leeway developing countries should have on standards.

Donald Trump’s express intention to pull the US out of the Paris Agreement and a recent meltdown at the UN’s flagship Green Climate Fund (GCF) have created political headwinds.

“We need to overcome… the obstacles that did not allow the board to deliver on the very important work it had to conclude,” said Espinosa.

On the flipside, major economies have reaffirmed their commitment to the pact. EU and Chinese leaders declared in July climate change was a “main pillar” of their relationship, promising closer cooperation and calling on diplomats to deliver a negotiating text ahead of the Katowice meeting.

Tyndall said the negotiating documents were “not in any sort of shape for ministerial engagement” yet. But informal meetings of climate ministers from key countries in Berlin and Brussels since May “were definitely helpful in sending strongly positive messages about the sustained political momentum behind the Paris Agreement”.