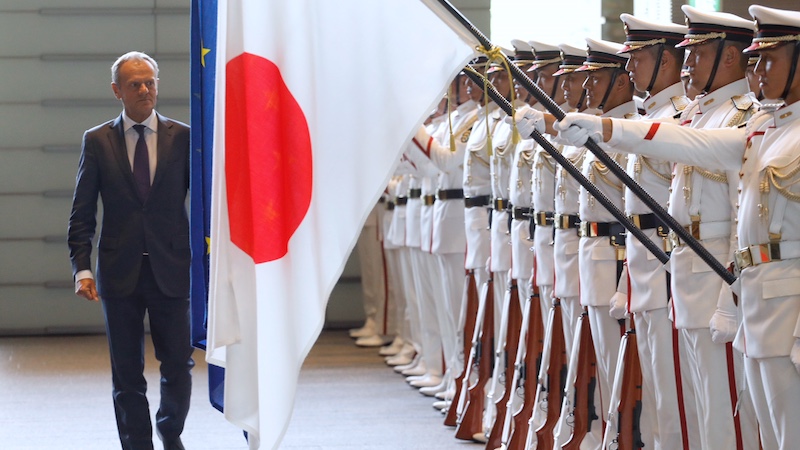 Europe’s massive free trade deal with Japan is the first the EU has struck with a specific provision on the Paris climate agreement.

The deal, finalised at a meeting of leaders in Tokyo on Tuesday, will create the world’s largest open trade zone.

In a first for EU trade deals, the world’s second and fourth largest economies agreed to work together to uphold the Paris climate deal. Trade could make a “positive contribution” to the fight to stop global warming, the agreement noted.

The deal also said Japan and the EU would “strive to facilitate” trade in renewable energy and other low-carbon solutions.

Europe’s commissioner for trade Cecilia Malmström has previously said participation in the Paris climate deal was a prerequisite for striking free trade deals with Europe.

The Paris deal has become a totem for a vision of multilateralism being undermined by Donald Trump’s US administration. Trump has said he wishes to withdraw from the deal as soon as legally possible.

The signing was originally planned to be held in Brussels, but Abe cancelled his trip at the last minute in response to deadly floods.

In remarks on Tuesday, European Council president Donald Tusk said: “We are putting in place the largest bilateral trade deal ever. This is an act of enormous strategic importance for the rules-based international order, at a time when some are questioning this order.”

Cooperation between Japan and the EU would extend beyond trade to other areas, said Tusk, including climate change.

Malmström said: “We are sending a strong signal to the world that two of its biggest economies still believe in open trade, opposing both unilateralism and protectionism.”

But experts have questioned the lack of detail on climate protections in the trade agreement.

A 2017 decision by the European Court of Justice found it was legal for the commission to suspend aspects of trade agreements if there was a breach of the sustainability chapter. But Ankersmit questioned whether the EU would put such a huge economic deal on the line for the sake of the Paris Agreement.

In an interview with CHN this month, UN environment chief Erik Solheim promoted the benefits of free trade for environmental protection, although experts said there was little consensus on this.

If you like what we do, please support us