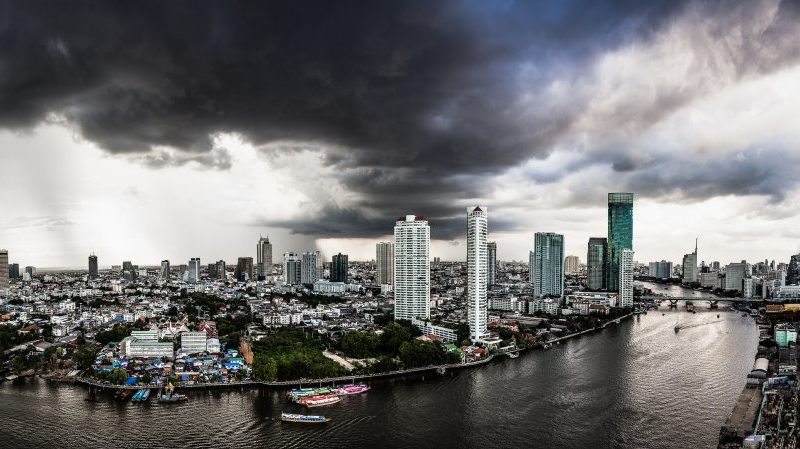 And so the show rolls on… to Bangkok. Difficult progress in Bonn has prompted the UN to schedule a long-anticipated extra session in the Thai capital.

Climate Home News heard from several sources, including Poland’s climate envoy Tomasz Chruszczow, on Tuesday night that the session had been officially confirmed.

There were whispered concerns in the corridors that the prospect of an extra meeting, which was trailed in December, had given negotiators room for stalling.

Now, with just one extra week before the critical Katowice meeting, they have a heap of work to get through.

Fossil fuel companies are still welcome at UN climate talks, for now. Talks on developing a conflict of interest policy ended on Tuesday with a mandate to… talk more next time.

After a huddle between Ecuador, Cuba and the Africa group, who advocate such a policy and the US, EU, Canada, Norway and Australia who don’t, they agreed to identify opportunities “to further enhance the openness, transparency, inclusiveness of the effective engagement of non-party stakeholders”.

Jesse Bragg of Corporate Accountability claimed this word salad as a win. “Despite repeated attempts from the US and others to eliminate any reference to the discussion that parties engaged in for six days, governments were successful in ensuring that the destructive role of big polluters remains front and center in the negotiations,” he said.

No, not from Poland. This was Loren Legarda, senator and founder of the Philippines’ Climate Change Commission, attending the Bonn session to lobby for ambitious emissions cuts and climate finance.

While “kick polluters out” is a popular slogan with activists, it is outside the mainstream, even for one of the most vulnerable countries to the impacts of climate change.

The historic climate deal for shipping agreed at the International Maritime Organization last month is little more than a footnote for these talks.

Still, Saudi Arabia wants to put on record that it does not accept the consensus target to halve maritime emissions by 2050. In a statement, the kingdom said the goal was “premature” and risks being “unrealistic and potentially harmful to the shipping industry”.

Small island states and the world’s poorest countries are hardest hit by climate change. For them, the difference between 1.5C and 2C warming, the range of ambition for the Paris Agreement, is material.

Unfortunate, then, that out of 86 authors and review editors of the Intergovernmental Panel on Climate Change special report on 1.5C due out later this year, just 11 come from those country blocs. Adelle Thomas from the Bahamas is the only woman among them. She crunched the numbers in a blog for Climate Analytics.

Talks on how donors provide advance information on climate finance to the developing world have gone nowhere, according to multiple sources.

That’s a problem not only for those depending on the money, but also those pushing for robust and universal rules to implement the Paris Agreement. The Africa group has made its support of the EU position on the Paris rulebook contingent on resolving this issue.

With just two days of talks in Bonn to go, the issue remains in what Alden Meyer of the Union of Concerned Scientists calls “tremendous gridlock”.

In a prime example of arcane and navel-gazing UN climate fights, some parties are unhappy about a recent rebrand by the UN secretariat… Bear with us.

Last year, the United Nations Framework Convention on Climate Change (UNFCCC) secretariat started to refer to itself as UN Climate Change. The new name was intended make the process more accessible to the people it serves.

“It was a way of trying to escape from the bureaucratic name of the last century and putting a more human name on the organisation”, (now former) UNFCCC director of communications Nick Nuttall told CHN. The change was certainly welcomed by journalists who could do away with an unwieldy acronym. The official name stayed the same.

But negotiators in Bonn, who appear to have missed the memo when the rebrand happened last year, are now furiously pushing back. The spat has crystallized around the UNFCCC’s first annual report, released last week, which notes the change.

Why? It drops the word ‘convention’, referring to the 1992 climate treaty that formally laid responsibility for climate change on a list of industrialised countries, which – they argue – is increasingly outdated. Developing countries cleave to the principle, though, and accuse the secretariat of picking sides.

It sounds nuts, but with two days left in the Bonn meeting and a huge amount to do, this stoush has certainly reached the level of distraction. A few negotiators have brought it up with CHN as their primary gripe at the talks. Anything that slows progress now could translate to a weaker rulebook for the Paris Agreement. Which is what some developing countries are hoping for. Call CHN a cynic, but we think there might be a connection.

Given the talks seem to be enveloping themselves in a self-referencing feedback loop, is it any surprise to learn that these talks have been poorly attended by journalists?

The UN climate secretariat told CHN numbers had fallen back to levels only seen in the years before the Paris Agreement captured global interest.

US outlets are fixated on their fruitful skewering of EPA chief Scott Pruitt. And these May talks always lack the political fight that can capture broader attention. But colleagues we have spoken to have said it has been tough to convince editors that this year of talks – the most important for the process since the Paris deal was struck – is worth covering.

This highlights a problem. As negotiators focus ever more minutely on details, does the convention still have a compelling story to tell? If it doesn’t, where will the political pressure come from to create strong rules?

The Talanoa Dialogue, an informal climate storytelling forum that began on Sunday, was definitively not a negotiating space, said Fijian ambassador Luke Daunivalu.

Indeed, as negotiators met on Tuesday to give feedback on the initiative, there was a sense of a changed language. More than 700 stories of climate struggle and inspiration were shared. It was a “positive vibe” said Egypt, it allowed negotiators to “talk about how we are feeling”, said New Zealand.

UN climate talks are emotionally constipated, yet deal with fundamental questions of humanity. Negotiators CHN spoke to said they felt better after having a space to engage on a different plane.

Despite this little catharsis, when the Talanoa conversation returned to the conference space, so did the old negotiating positions.

A representative of small island states laid out several statements they hoped would be included in the “political outcome” of the Talanoa. These included affirming the need to raise ambition and increase finance.

The dialogue address three questions: where are we, where do we want to go and how do we get there? China pointedly suggested adding a fourth question: where do we come from? A reminder from the world’s biggest carbon polluter that historical responsibility for climate change lies elsewhere.

The question for the dialogue is whether its feel-good factor can withstand the political constriction of the UN talks.