Countries adopted a compromise emissions target at the International Maritime Organization on Friday, with further battles to come over how to put it into practice 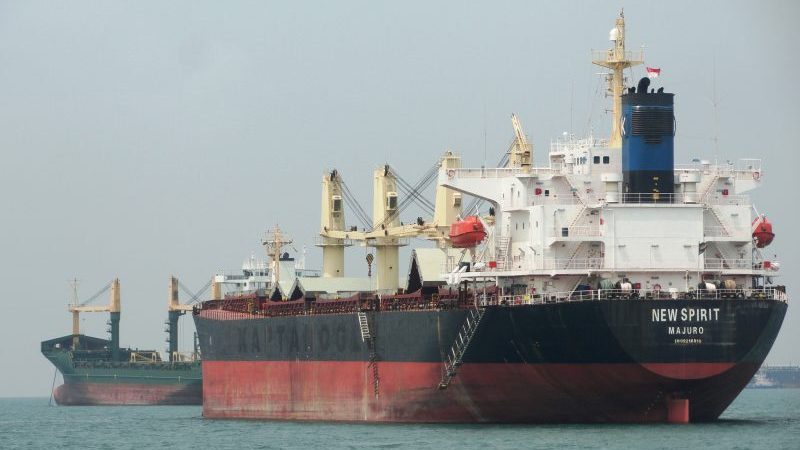 Shipping must halve its carbon footprint by 2050, under a new international deal (Pic: Flickr/Fabio Achilli)

Global shipping must at least halve its emissions by 2050, under a hard-fought international deal that for the first time sets the sector on course to shrink its carbon footprint.

The agreement reached by the International Maritime Organization (IMO) on Friday is an initial step for one of the world’s biggest polluting industries. Over the next five years, negotiators are to develop a package of measures to fulfil the target, delivering a final strategy in 2023.

After a tense week of talks, with blocs of countries tussling over the level of ambition, negotiators stuck to a compromise forged the previous week.

Climate advocates expressed disappointment the target did not go further, saying full decarbonisation by 2050 was needed to align with the global warming limits in the Paris Agreement.

“Nevertheless, this deal provides the very clear policy signal that is needed for international shipping to begin to play its full part to achieve the goals of the Paris Agreement,” Marshall Islands environment minister David Paul and Christiana Figueres, head of the Mission 2020 initiative on climate action, said in a joint statement Thursday evening. It “keeps alive” the possibility to meet the accord’s stretch 1.5C warming limit and to review the strategy in light of new science, they added.

Now the task is to decide how to meet those climate goals for shipping.

The goal is to reduce maritime emissions at least 50% by 2050, from 2008 levels, while pursuing full decarbonisation in line with the Paris Agreement. The strategy also sets a target to reduce CO2 emissions relative to each tonne of cargo shipped by at least 40% by 2030 and pursue efforts towards 70% by 2050, and plans to review the IMO’s energy efficiency design rules with an eye to strengthening them.

Talks on implementing the targets are to be guided two principles: “common but differentiated responsibility” between rich and poor countries for tackling climate change, from the UN climate convention; and the IMO rule against discrimination between ships by the country where their flags are registered.

In a sign of battles to come, several countries registered concerns about the compromise. The US, Saudi Arabia, Brazil, India, Iran and the Philippines were among the strongest opponents of a cap on emissions – some arguing it’s premature and could harm the shipping industry, and others saying it would need adjustment before the strategy is finalised in 2023.

Another key battleground is how to divide responsibility between the world’s rich and poor, while respecting the IMO’s policy against discrimination between its 173 member countries. Russia, Canada and the US were among those warning this could be tricky.

The principle of “common but differentiated responsibilities”, or CBDR, is a familiar battle line in international climate change negotiations. Developing countries argue the industrialised world should shoulder more work; developed countries including the US and Europeans say everyone needs to do as much as possible.

But drawing those divisions is complicated in the shipping sector, which largely operates – and emits – outside national boundaries.

“When it comes to the IMO, CBDR is very difficult to apply, frankly,” Figueres, former head of UN Climate Change, told journalists outside the IMO last Friday. It is not clear which country is responsible for a ship’s emissions: where the shipowner is based, where its flag is registered, where its cargo comes from or where it is going.

Figueres argued the principle should not become a “straightjacket” or let emerging economies off the hook. “Developed countries have a historic responsibility for their emissions. That is not disputed,” she said. “The Paris Agreement also looks into the future… in the future there is shared responsibility.”

Historically, the IMO has organised its regulation around flag states. Nearly 70% of the world fleet is controlled by ships registered in developing countries. Panama, the Marshall Islands and Liberia are the three biggest flag states.

If different rules were applied in different flag states, shipowners could dodge the toughest restrictions by registering in a different country. Industry figures warned this was not viable.

“[Common but differentiated responsibility] is always concerning,” Maria Skipper Schwenn, executive director for security, environment and marine research at the trade association Danish Shipping, said on the IMO sidelines. “CBDR cannot be part of any measure, because any measure must be flag-neutral, meaning that the requirements apply equally to all vessels, no matter what flag they fly.”

Instead, poorer countries could get help in meeting their emissions reduction goals, for example through technical cooperation and transfer of technology, Skipper Schwenn and other industry representatives said.

Those details will be thrashed out in further rounds of negotiation over the tools to push emissions cuts. Proposed measures include speed reductions and tougher energy efficiency design rules in the near term, market-based levies and subsidies in the mid-term and development of zero-emission fuels further down the line. The IMO’s next environmental committee meeting is in October.

Measures that can be taken before the strategy is finalised in 2023 are critical to making sure the industry tracks the Paris Agreement’s temperature goals, said Dan Rutherford, director of the marine and aviation program at the independent International Council on Clean Transportation. Tightening efficiency rules for new ships now, he said, would keep more polluting vessels out of the fleet over the next 30 or 40 years.

Industry players and developing countries are more resistant to the idea of mandatory speed reductions, which climate advocates say would quickly trim emissions. Chile, Peru and others argued it would disrupt deliveries of fresh produce and complicate trade.

For industry, the key is technology and innovation — both in ship design and clean fuels such as hydrogen, biofuels, batteries or synthetic fuels.

“The message from the Norwegian Shipowners is very clear: Reduction of CO2 from international shipping will not be solved with speed limits,” Tor Christian Slatner, head of environment, research and innovation at the Norwegian Shipowners’ Association, said at the IMO. “There are multiple other solutions that are better for trade.”