Macron: EU ‘mad’ to do trade deal with US after Paris climate withdrawal

‘I’m not in favour of showing any softness to those who decide to break those rules,’ the French president said about the deal struck in his capital in 2015 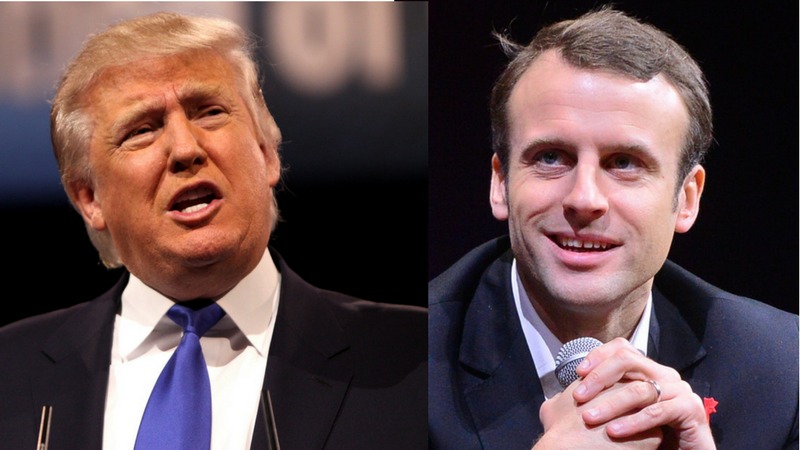 French president Emmanuel Macron has warned the EU would be “mad” to sign a trade agreement with countries that refused to honour the Paris climate agreement.

Macron was speaking a day after the Irish Taoiseach, Leo Varadkar, implored Trump to consider “a new trade deal between the US and the EU”, as a way of lowering trade tensions over steel and aluminium tariffs.

Speaking at a conference in Brussels, Macron said that since Trump had indicated US withdrawal from the Paris deal, a new trade deal would undermine clean energy producers in Europe, and project a message of weakness abroad.

Far from bending to the will of the US, “trade agreements should reverse the burden of proof,” Macron said. “They should be a way of spreading our standards. Anyone who signs an agreement with the EU should be committing to put the Paris Agreement into practice…

“We even go beyond our own rules and ask our own economic agents to do the same. Why should we sign a trade agreement with powers that say they don’t want to implement the Paris Agreement? We would be mad [to do so].”

“I’m not in favour of showing any softness to those who decide to break those rules,” he said. “We can no longer pursue objectives that work against our own [climate] policies inside our own borders.”

EU: ‘No new trade deals with countries not in Paris Agreement’

Doing so would “discourage” Europe’s clean energy investors who might suffer from unfair competition as a result, he added.

The French leader also made an impassioned plea for a European carbon floor price, and a border tax to prevent cheap, carbon-intensive products entering the EU market which could undermine cleaner local producers.

Macron called for the EU’s budget – currently being negotiated – to increase the fifth of budget spending currently earmarked for climate measures. This is likely to upset some other EU states, such as Poland, which has painted climate action as a drag on economic growth.

“In the [European] Council debate, we have to set an objective that none of the expenditure is hostile to the climate,” he said. “Setting climate spending at 40% of the budget would be ambitious compared to today but I think we can achieve it.”

Macron’s oration brought what would normally have been a staid sustainable finance conference to its feet for a one minute standing ovation, with attendees enthralled at the sight of an EU leader ‘walking the walk’ in the face of Trumpian assault on Paris.

Last month, CHN reported the French foreign minister, Jean-Baptiste Lemoyne, said that if Trump withdrew the US form the Paris agreement, there would be “no trade agreement – the US knows what to expect”.

That position was subsequently backed up by the European Commission and the practice is already implemented in some of the EU’s latest trade deals. Macron’s comments on Thursday were the first time a European head of state has referred to the precondition.

Earlier in the day, the UN’s special climate envoy, Michael Bloomberg, told the conference that under Trump, Washington was “out of synch with the national zeitgeist but it matters less”.

US cities and regions representing emissions roughly equivalent to the UK, France and Germany combined remained committed to the Paris Agreement, he said.

In a bid partly intended to reverse the shortfall in climate funding caused by the US’ reneging on Obama-era spending commitments [link], the Global Covenant of Mayors issued a new funding call in Brussels.

Multilateral banks including the EIB, EBRD and World Bank, appealed to states, pension funds and investment houses for $200m to fund developing cities and $600m for enhanced credit financing.

This sum could then be leveraged up to $6bn, according to Cristiana Fragola, a director of the covenant.

“If pension funds – most of which spend just one-two percent of their funds on climate action – were to allocate even a minor portion of their assets to this call, we could really move the needle substantially,” she told CHN.