Will these hand-painted signs be enough to stop a dam in the Amazon?

With indigenous land demarcations frozen across Brazil, illegal mining and hydro dams threaten the Amazon. Communities are taking matters into their own hands 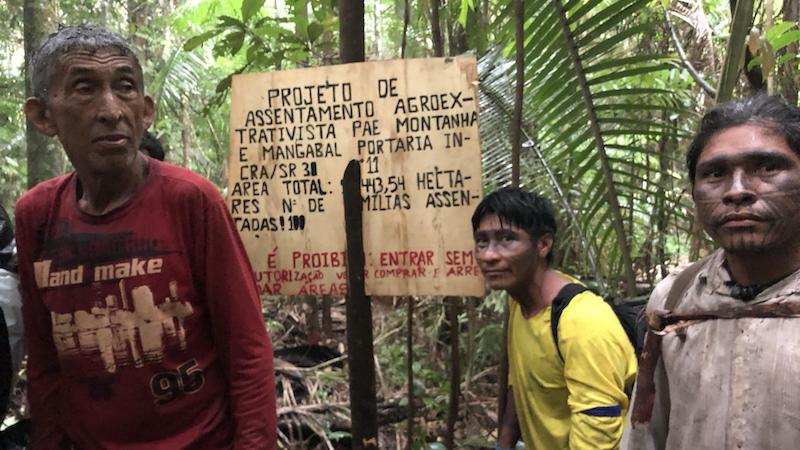 "Entrance is prohibited without authorisation". A team of indigenous people and locals have marked out the border of the 54,400 hectare Montanha e Mangabal territory in Brazil's Pará state (Photo: Fabiano Maisonnave)

By Fabiano Maisonnave in Pará

Thus, community leader Ageu Lobo chooses his words carefully while telling a group of them they cannot remain inside the ‘Agroextractivist Settlement Montanha e Mangabal’, a federal project that until last week existed only on paper.

“In 2006, our community got a court decision recognising that we occupy this territory,” Lobo tells the miners. A judge threatened non-community members with a R$10,000 [$3,100] daily fine for trespassing, he adds.

The gold miners, four in total, did not look happy. One of them fiddled with a machete attached to his waist. Another, walking nervously back and forth and avoiding eye contact, said: “God would come down from the sky to solve it, as no human being owns anything.”

As risky as confronting gold miners can be, Lobo, who has received death threats in the past, was safe enough, for he was not alone. For five days, he along with dozens of villagers and indigenous warriors had been cutting through 17.5km of thick forest.

The creation of the settlement, where there are 101 families living, was approved in September 2013 to international fanfare. It was seen as a surprise win for poor communities, with the government ceding control of an area in which it has plans to develop hydroelectric power. 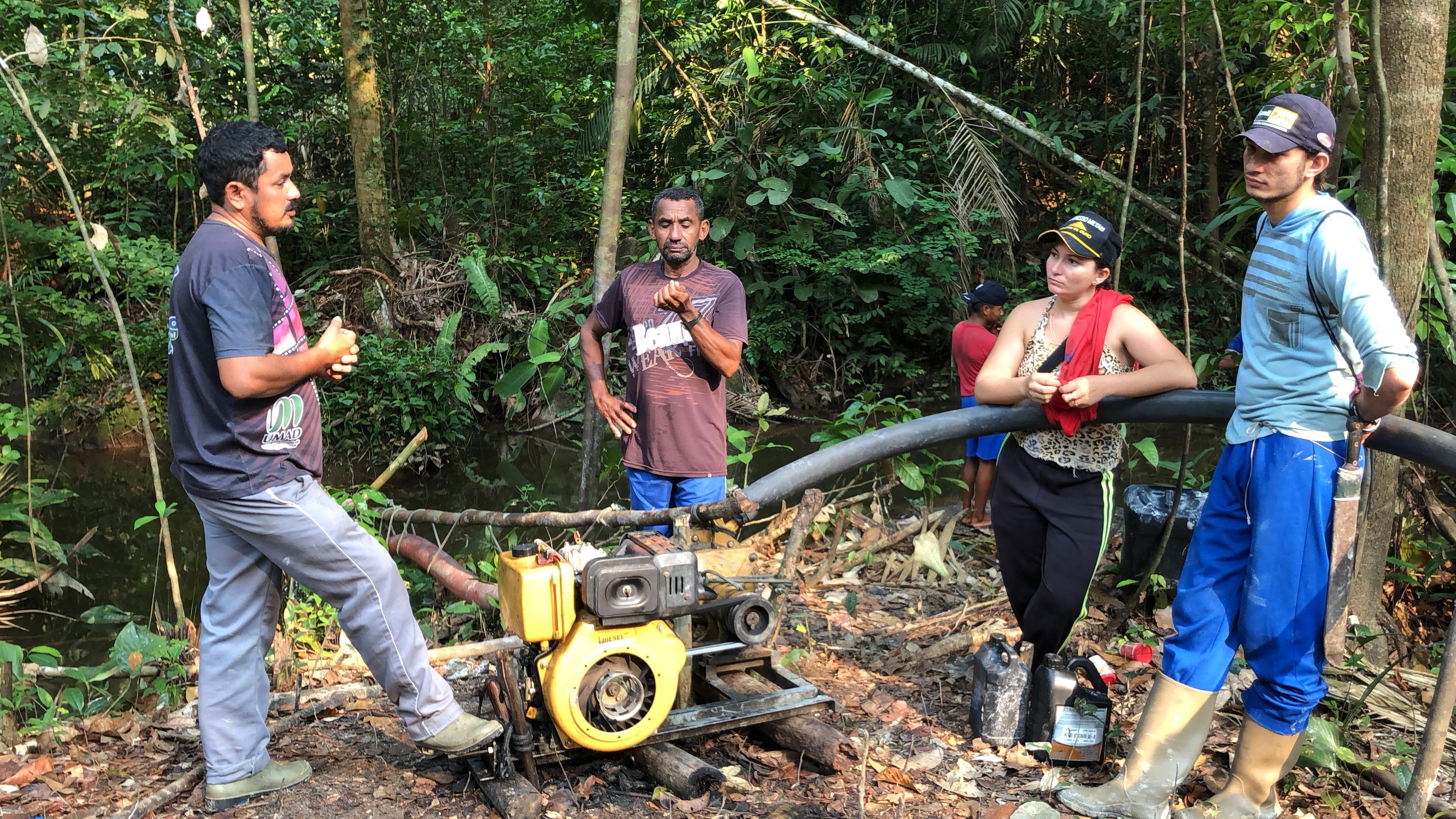 But since then, no progress has been made to formalise the boundary. The National Institute for Colonisation and Agrarian Reform (Incra) has not even mapped the 54,400 hectares, a task that should have finished within a year, according to government decree.

Fed up with waiting for the government to fulfil its promises, the “beiradeiros” or riverside dwellers, so called because they lived on the banks of the Tapajós river, were drawing their own border. They marked the limits of the territory with a series of improvised plaques and a pathway cut through the forest. This reporter joined them for three days.

Under pressure from a powerful caucus of pro-agriculture members of congress, Brazil’s president Michel Temer has frozen all new land demarcations since he took office last year, even those processes that are in an advanced stage are being blocked. The government has also refused to comply with judicial orders to evict land-grabbers from indigenous lands.

For Lobo, whose family settled by the Tapajós seven generations ago, self-demarcation has several aims: it allows them to build sustainable forest-based industry and inhibits the invasion of land-grabbers, miners and loggers, it presses Incra to fulfil its promises and it strengthens their stance against large hydropower projects. 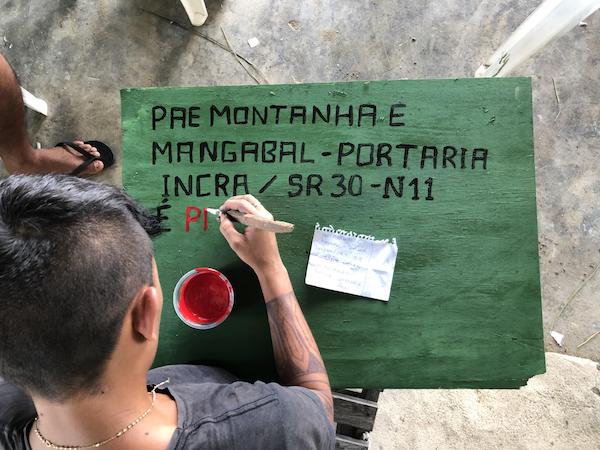 The community independently marked out the border, putting pressure on Incra’s regional superintendent Mário da Silva Costa who eventually held a public hearing on 17 November this year. During the meeting, he promised to implement official border markers.

Their idea to take matters into their own hands has precedent. In 2014, their Munduruku neighbours posted plaques along the edge of the Sawré Muybu Indigenous Land, across the Tapajós River. The area has been approved by Funai, Brazil’s indigenous bureau. But the process was stuck, waiting to be ratified by Brazil’s minister of justice and Temer.

The self-demarcation helped the Munduruku fight against São Luiz do Tapajós, the largest planned dam in Brazil. Estimated at $9.4 billion, the expected capacity would be enough to supply a city of at least 8.5 million people.

In April 2016, Ibama, Brazil’s environmental agency, suspended the license because of “irreversible” impacts on the Munduruku. Eletrobras, Brazil’s state energy company filed an appeal, still unanswered. The communities believe that a physical border, even if it is not official, makes it harder for developers to ignore them.

Lobo hopes to use the same tactics to fight another hydro project inside the Montanha e Mangabal territory, the smaller Jatobá plant. Its environmental and social impacts are currently being assessed by the government.

With the freeze in land demarcations across Brazil, the Tapajós experience has made ripples and attracted the interest of leaders from other regions of the Amazon, mostly indigenous people.

One of the seven indigenous men from the remote Trombetas valley helping Lobo mark out his land, Joventino Kaxuyana, traveled three days by boat and bus to join the group. With GPS in hand, he was in the front group learning how to use the equipment.

There are hundreds of small scale illegal minig operations in the forests around Montanha e Mangabal (Photo: Fabiano Maisonnave)

Next year, he wants to repeat his experience in the 2.2 million-hectare Kaxuyana-Tunayana Indigenous Land in the municipality of Oriximiná in the state of Pará, where there is also a planned hydro power dam. The area has already been drawn up by a Funai report, but the process is languishing in Brasilia.

For Lobo, the border remains makeshift. Without the government’s back-up, his threats of fines and legal backing are toothless.

In other parts of the Amazon, the power vacuum left by a state unwilling to protect the world’s most important forest is leading to violence. So far this year, two massacres have left 19 peasants dead and the alleged slaughter of an isolated tribe by illegal gold miners is still under investigation. Under-gunned, Brazil’s environment agency has had vehicles and buildings torched.

They leave the miners in the forest, not knowing whether their warnings and hand-painted signs will be heeded.