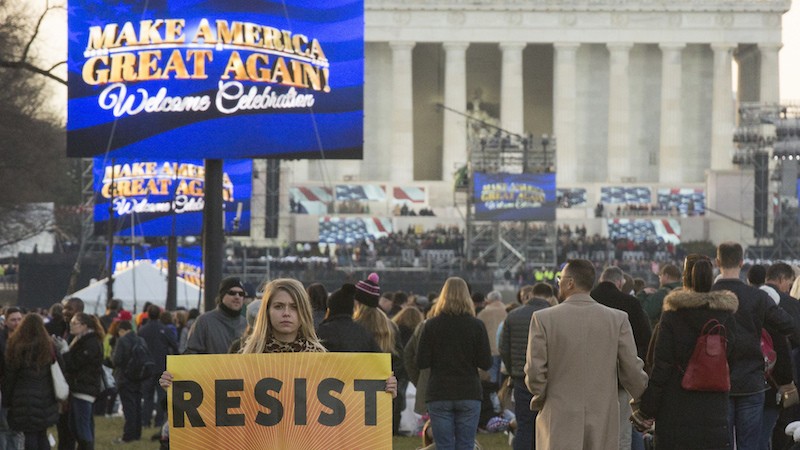 Since Donald Trump's inauguration in January protesters have organised against his administration (Photo: Greenpeace USA

Yesterday’s elections in the US suggest that voters across the country are beginning to reject Trumpist candidates and policies, a sentiment that may grant Democrats wins in next year’s elections.

The stakes are high since Democrats are hoping to regain control of Congress and perhaps bring climate action back into the agenda. Yesterday’s elections provide some hope for the rest of the world, gathered in Bonn, Germany for UN negotiations on climate change.

Brandon Wu, director of policies and campaigns at ActionAid USA, said: “Yesterday’s elections were only the beginning of a rejection of the Trump administration’s destructive, hateful, racist, corrupt policies and positions. That’s hugely encouraging for many reasons, including the Trump approach to the climate crisis.”

The elections included a handful of intriguing results in state and local races and some statewide referenda. The spotlight was on Virginia, a closely fought race that pitted Trump surrogate Ed Gillespie against Democrat Ralph Northam. Throughout the campaign, Northam accused Trump – and Gillespie by extension – of promoting environmental deregulation and pollution in the state.

The campaign was brought to the national stage by the president’s tweets in support of Gillespie and the candidate’s support for some of Trump’s more extreme positions. Northam won in what former Virginia GOP congressman Tom Davis called “an old-fashioned thumping”. The message in Virginia was that suburban, immigrant and wealthier areas may be unwinnable for Republicans in the near term.

In New Jersey, governor candidates Phil Murphy (D) and Kim Guadagno (R), were relatively pro-climate action. Both declared their support for New Jersey rejoining the Regional Greenhouse Gas Initiative (RGGI), the mandatory market-based emissions reduction program for power plants that was the first of its kind in the country. (New Jersey withdrew from the program in 2011 under Republican Chris Christie.)

While Guadagno broke from her party on climate, Murphy’s position went further, as he promised to work to make the state’s electricity 100% carbon-free and opposed the US’s withdrawal from the Paris agreement. Murphy took the election, giving hope that Chris Christie’s inaction will be replaced by pro-environment policies and that environmental action at the state level may continue on an upward trend.

In Washington state, local elections revealed that being Trumpist, or even just having the label of Republican, could prove fatal. One Democratic win flipped the state’s Senate blue (Democratic), turning the West Coast into a “‘blue wall’ with Democrats controlling the legislatures and governors’ offices in Washington, Oregon and California,” the Seattle Times reported.

“Annihilated in the suburbs, this is what Trumpism has wrought,” said former Republican Party chairman and King County council member Chris Vance. “The Republican Party is dying in urban and suburban America.”

​Josh Busby, professor of public affairs at the University of Texas, called the elections “the most significant defeat of Trumpism to date, and its anti-science, anti-environmental agenda.” And “It’s opening the door to New Jersey returning to RGGI and even Virginia may join for the first time.”

These races could be the first wave of opposition to Trump’s unpopular presidency, although the long-term trend remains unclear. It is clear that Trump’s aggressive environmental deregulation, and most visibly his withdrawal from the Paris Agreement on climate change, has raised environmental issues on the agenda of campaigns across the country. Having more environmentally friendly leaders at the state and local levels could also encourage climate action at higher levels, including in Congress.

Before the election, the national League of Conservation Voters president Gene Karpinski wrote: “Voters in Virginia, New Jersey and Washington have prime opportunities next week to weigh in and influence the clean energy future of the states they call home while also signalling to the polluter-aligned Congress and administration that favouring the fossil fuel industry’s profits over our families has consequences.”

Timmons Roberts is a US sociologist and Ittleson Professor of Environmental Studies at Brown University. Mara Dolan, Angelica Arellano, Logan Dreher are students and researchers in Brown University’s Climate and Development Lab.