Secretary of agriculture agrees statement on global hunger, but unlike previous G7 statements a reaffirmation of the Paris climate deal was dropped 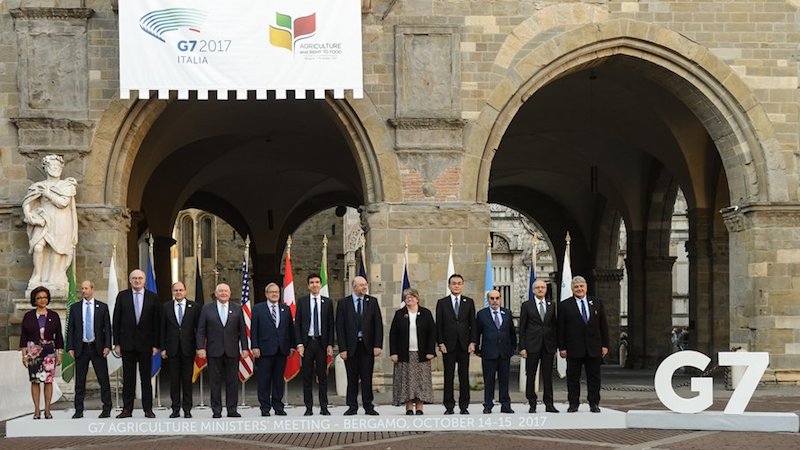 Ministers of agriculture from the G7 and EU met in Bergamo, Italy on the weekend (Photo: G7 presidency)

Sonny Perdue met with ministers of agriculture from the G7 countries and the EU over the weekend. Their final communique, signed by all countries, said climate change was one of a number of threats to “our capacity to feed a growing population and need[ed] to be taken into serious consideration”.

The ministers noted droughts, floods, earthquakes, plant and animal diseases, pest infestation, market shocks and conflicts were impacting farmers and food production. “Climate change is projected to amplify many of these issues,” they said.

On Sunday, Perdue told the Wall Street Journal his personal views on climate change. He appeared to accept the climate was changing. When asked if he believed human activity was contributing, he said: “I don’t know that, nor that I think that it has been proven to be that. There are scientists on both sides of that.” A 2013 study of 4,000 climate research papers found that 97% agreed humans were responsible for climate change.

At previous G7 and G20 meetings this year, the US refused to sign communiques that highlighted the need to implement the Paris Agreement. This led to a ‘G6’ statement on climate change among energy ministers and leaders.

At the weekend meeting in Bergamo, Italy, agriculture ministers sidestepped the problematic issue of the Paris accord, which Trump has called a bad deal for the US and committed to leaving, focusing instead on the impact of warming on agriculture.

The only mention of the agreement, which was signed by nearly 200 countries in 2015, was a statement of fact: “The preamble of the Paris Agreement recognises the priority of safeguarding food security, and the particular vulnerabilities of food production systems to the adverse impacts of climate change.”

With this, ministers avoided a fight with the US over reaffirming their commitment to the deal.

Since 2015, G20 and G7 leaders and ministerial statements have included reaffirmations of the Paris accord. Climate Home News understands that after Trump announced he intended to withdraw from the Paris deal, the Italian G7 presidency had decided it was not worth producing a statement with which the US would obviously not agree.

Climate Home News asked the G7 presidency whether lines affirming the accord had been considered by ministers in Bergamo, but there was no response by the time of publication.

At the corresponding meeting in Niigata, Japan last year, the ministers’ statement said: “We need to take action on these issues, including the implementation of the 2030 Agenda for Sustainable Development and the Paris Agreement on climate change adopted in 2015.”

It added: “We are also committed to supporting the implementation of the 2030 Agenda as well as the Paris Agreement.” No lines of this type appeared in this weekend’s statement.

However, the inclusion of language about climate risks indicates the US remains willing to engage on climate issues, so long as discussions do not refer to the Paris deal or human drivers of global warming. The agriculture ministers also commissioned a study into the effect of extreme weather on agriculture and food production.

US secretary Perdue met with the pope while in Italy, speaking at an event with him to mark World Food Day.

“All of us, including the US, must remain diligent in our pursuit of global food security,” said Perdue in a speech to the UN food agency on Monday.

The pope however, made it clear he was unhappy with the US stance on the Paris deal. In his remarks, for which Perdue was in the audience, he said “sadly, some have abandoned” the accord.