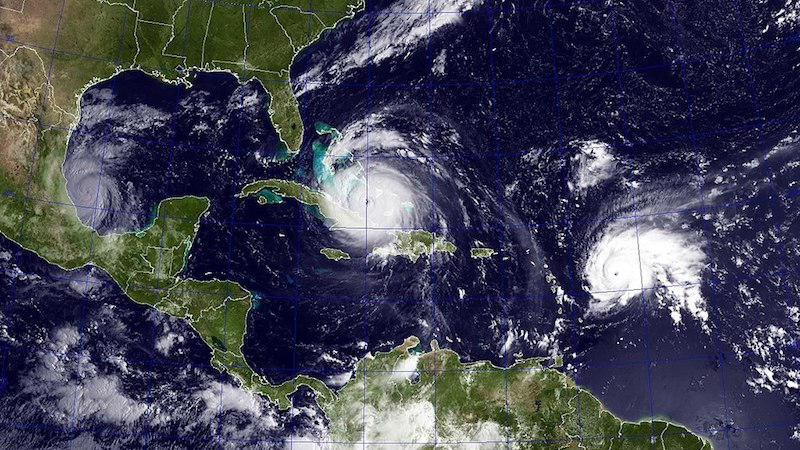 Hurricanes Katia, Irma and José (from left to right) were all active in the Caribbean on 8 September (Source: US Navy)

The catastrophic Atlantic hurricane season has been made worse by climate change, UN secretary general António Guterres said on Monday.

Guterres was joined at the UN general assembly in New York by a chorus of international ministers at a high-level meeting on Hurricane Irma, hastily called last week in response to the devastating storm that levelled several Caribbean islands in the last fortnight.

Guterres said cutting carbon emissions “must clearly be part of our response” to the disaster. “The rise in the surface temperature of the ocean has had an impact on weather patterns and we must do everything possible to bring it down.”

“This year’s hurricane season is already the most violent on record and it will continue until November,” Guterres said. “The season fits a pattern. Changes to our climate are making extreme weather events more severe and frequent, pushing communities in to a vicious cycle of shock and recovery. Extreme weather linked to climate change has an impact all over the world, including floods in southern Asia and landslides and drought in Africa.”

Last month, more than 1,200 people died as monsoon floods hit south Asia, whereas in the US Hurricanes Harvey and Irma killed just over 100.

Guterres said the “huge discrepancy” between lives lost in storms of “similar size” highlighted the need to help poor countries better prepare for the effects of extreme weather. The UN’s 2030 Sustainable Development Goals could “never be achieved” in countries that were constantly rebuilding, he added.

The meeting, which a briefing note said would offer nations “an opportunity to highlight the role of climate change in extreme weather events”, was attended by ministers from affected countries as well as those wanted to offer support for reconstruction.

“We need to get used to the multiplication of these tragedies now,” said French minister for ecology Nicolas Hulot.

The French dominions of Saint Martin and Saint Barthélemy were severely damaged by Irma. Hulot said France intended to make the islands “examples of resilience” as they rebuilt.

“In a very brutal fashion, nature shows us the limits of the human condition and compels us to shoulder the consequences of our nonchalant attitude. If we do nothing in order to combat climate change then climate change will become a serial killer in the 21st century,” he said.

On Tuesday, France’s prime minister is expected to address the general assembly of the UN to call for a global environment pact.

Several Caribbean ministers were in attendance, as the region faced a further devastating storm – Maria – which devastated Dominica late on Monday.

Governor general of Antigua and Barbuda Rodney Williams said his prime minister Gaston Browne had been unable to travel to the UN assembly in order to prepare for the arrival of Maria. Barbuda was hit exceptionally hard by Irma. Williams said the nation had been left “dazed” by the impact of the storm and Barbuda had been left uninhabited for the first time in more than three hundred years.

“There are lives being destroyed,” said Dominican Republic president Danilo Medina said: “Irma is not a phenomenon in isolation, but an extreme symptom of a greater problem… Climate change and its consequences should not be the subject of speculation or debate. It’s a truth which hits us and which causes great uncertainty.”

A minister from the United Arab Emirates also spoke at the meeting, announcing two renewable energy construction projects in the Caribbean.

“Hurricane Irma is also a critical reminder that the frequency of weather-related disaster is increasing,” said assistant minister of international development affairs Sultan Mohammed Al Shamsi. “We must not only commit to uphold the Paris Agreement, but also to allocate more funding to prevention and adaptation.”

US deputy representative to the UN Michele Sison addressed the meeting, offering solidarity to other affected countries, but made no mention of climate change. Despite the US suffering heavy hurricane damage, when asked about climate change links President Donald Trump downplayed the scale of the storms.