Arthur Neslen in Brussels and Karl Mathiesen in London" />

China, EU and Canada to take lead on climate at Montreal meeting 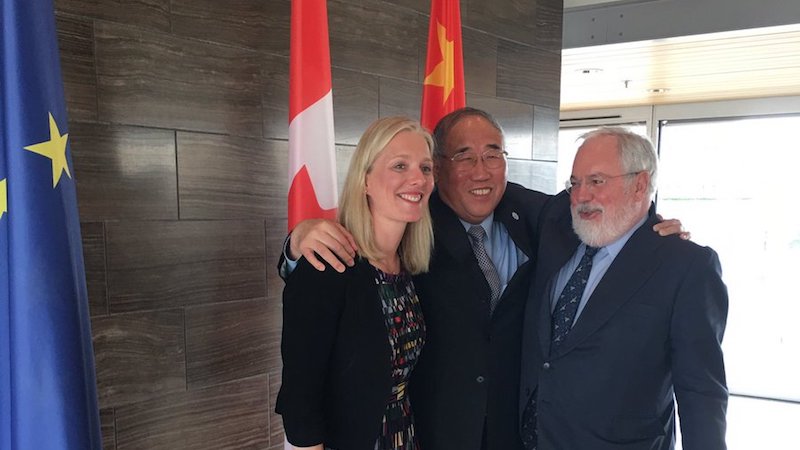 By Arthur Neslen in Brussels and Karl Mathiesen in London

A changing of the climate guard from Washington to China, Europe and Canada will occur on Saturday, when ministers and representatives of up to 30 major economies convene in Montreal for the first climate talks since the US withdrew from the Paris agreement.

Shadowed by two record-breaking US hurricanes in one week, the meeting will be co-convened by Brussels, Beijing and Ottawa – in what EU sources describe as a “pretty remarkable achievement”, given past differences between China, the developing nations and the West.

“This meeting brings together major economies and key climate actors to advance the implementation of the Paris Agreement and demonstrate continued commitment to global action on climate change,” said Canada’s environment minister Catherine McKenna in a statement to AFP.

The EU and China came close to issuing a powerful joint statement on climate change leadership in June, only for the talks to founder over the EU’s unwillingness to recognise China as a market economy.

An EU source told Climate Home the communique was not dead: “The moment for it has passed – until the next moment arises. That will probably be in the next time we are in summit formation.”

The new coalition will need to find ways to work around their differences if they are to present a united voice on climate change. The Europeans and Chinese remain at loggerheads on issues such as transparency rules for carbon accounting.

The US has spearheaded action for a decade, particularly through the Major Economies Forum on Energy and Climate.

The Mef, as it is known in climate circles, was a group of 17 large nations formed by former US president George W Bush. It was used by Barack Obama to corral economies that account for 80% of the worlds emissions into cooperation on climate change.

But no new Mef meetings have been scheduled. (On Tuesday, the Mef website appeared to have been the victim of a cyber attack, a state department spokesperson said they were looking into the issue.)

In light of this, the meeting of ministers in Montreal, under a new triumvirate leadership group representing North America, Europe and Asia represents the dawning of a new era in climate negotiations.

But the familiarly dry agenda of differentiation, transparency rules and nationally determined contributions may yet be upstaged by a climate announcement from the Trump administration.

The New York Times reported on Tuesday that Gary Cohn, the head of Trump’s National Economic Council, would convene a breakfast meeting with about a dozen ministers in New York on Monday next week.

Several sources told Climate Home the US has signalled that it will flesh out its position towards the Paris Agreement.

“We are expecting to hear something from the US at this ministerial about their re-engagement with Paris,” one senior climate diplomat told Climate Home. “It is likely to be quite Paris-specific as they intend to engage actively and constructively in the work programme – they are characterising it as ‘active and constructive’.”

“The message [is] that they are exploring terms that do not involve any quest to renegotiate Paris,” the source added.

In June, Trump said he intended to pull the US out of all obligations under the 2015 Paris Agreement. But since then the US has repeatedly signalled this position could change and the world’s second biggest carbon emitter could stay in the deal under terms the administration deems more favourable.

Last month, a diplomatic cable from the US secretary of state Rex Tillerson said that the US had no plans to try to renegotiate the Paris agreement, and talked of a “potential re-engagement”.

According to delegates in the room, Talley emphasised current progress in lowering US greenhouse gas emissions, which are currently falling by a few percentage points each year, and said the US intended to take part in writing the rulebook for the Paris Agreement while it remained a party to the deal.

How receptive other nations are to the US’ input remains to be seen. But there is an effort to keep the US in the diplomatic loop. In the run up to the Bonn COP23 climate summit, EU and US officials are now said to be in “almost continuous touch”.

Much of Trump’s climate diplomacy to date has been handled by Cohn and David Banks, a special assistant on international energy and environment issues. It is thought that Cohn will be in Montreal at the weekend.

Many attendees, including the EU’s climate commissioner Miguel Arias Canete, will be relocating to New York on the Sunday for meetings at the UN General Assembly, ahead of a ‘Climate Week’ event which will be attended by the UK minister Clare Perry.

The British prime minister, Theresa May, and US environment administrator Scott Pruitt are also expected to attend the UN meet. Pruitt is seen as a hardline climate denier who favours a “scorched earth” position on climate matters, compared to less ideological voices in the state department and economic portfolios.

Last week, Pruitt told CNN that it would be “misplaced” to talk about climate change in the context of Hurricane Irma, which has devastated Florida.

Trump’s spokeswoman, Sarah Huckabee Sanders, yesterday told US reporters that the president’s views on climate change had not been changed by the extraordinary convergence of record-breaking storms.