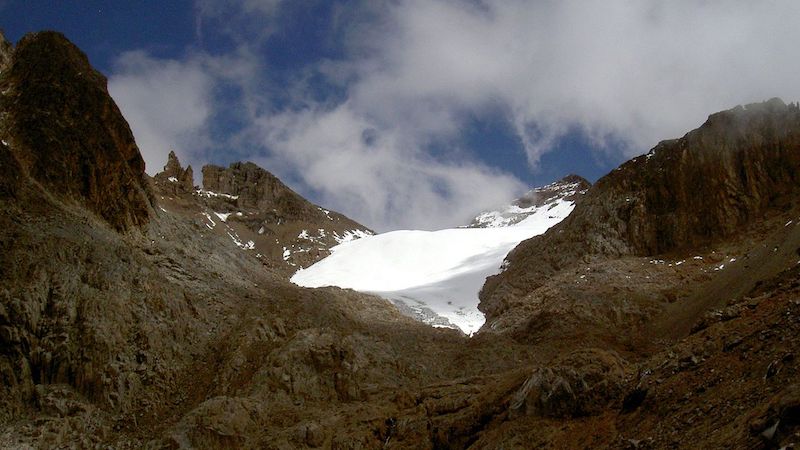 Lewis Glacier, the largest glacier on Mt Kenya, has shrunk by 90% since the 1930s (Photo: Chris 73/Wikimedia Commons)

By Daniel Wesangula in Karatina

But most importantly, Gitaru remembers how each day his grandfather would wake up and face Mount Kenya and pray.

“He believed the mountain was the source of life,” Gitaru says. “At that time, its whole peak was white as cotton wool. We were told as young boys, that was where the gods were. And we believed it.”

From the snow-capped mountain came folklore; came tales of bravery and bounty handed down from generation to generation. But more importantly, from the glaciers near the summit, which rises to more than 5,000m above sea level, came streams that fed into bigger streams that fed into rivers that gave life to everything that lay around the mountain; including Gitaru, his neighbours in Karatina region, friends and some enemies too.

Gitaru belongs to the Kikuyu tribe, Kenya’s most populous according to the most recent census. The Kikuyu refer to the mountain as Kirinyaga (Mountain of Whiteness) and traditionally revere it as home to their omnipotent deity Ngai. But lately, the deity appears to have forsaken them.

“The ice is melting away. The rivers flowing from the glaciers are not as full as they used to be. Some have dried up. And this is causing conflict downhill,” Kenyan environmentalist and chairman of Kenya’s Water Towers Management Authority Isaac Kalua says.

The United Nations Environment Programme estimates that only 10 of the 18 glaciers that covered the mountain’s summit a century ago remain, leaving less than one third of the previous ice cover. The Lewis Glacier, the largest on Mt Kenya, has decreased by 90% in volume since 1934, with the highest rates of ice volume loss occurring around the turn of the century.

“When the melting starts, rivers first experience high flows because of the melting ice,” says Kalua. “But this subsequently reduces because the glaciers never really recover like they did before climate change became a reality. Because of this, there is less and less water in the rivers in the years that follow.”

Kenya, like many African countries is highly vulnerable to climate change because of its exposure to increasing temperatures and rainfall variability and its dependence on agriculture.

“Any change in anything that could affect this subsistence agriculture almost always ends in conflict,” Kalua says.

Forty-five year-old Albert Lesiyan knows this too well. In April of 2017, he and group of four cousins drove close to a thousand cows from their ancestral home in Laresoro, a village in the Samburu region, and moved them north towards Nanyuki town, much closer to Mt Kenya.

“Our cows had nothing to eat. Even if it were you, would you let your cow die yet there is grass somewhere near?” he asks, briefly chewing on a grass stalk.

But there was a problem. Nanyuki town is some 70 kilometres from his village. And the grass they had been told about, grew on private land.

“We cut the fence and drove our cattle in,” he says. Their timing couldn’t have been worse.

Early March, herders had shot and killed Sosian Ranch co-owner Tristan Voorspuy while he was inspecting a burnt lodge in the expansive 24,000-acre ranch. The region had been battling mass invasions, violence and vandalism by herders that drove away tourists, investors and caused job losses.

A week prior to Lesiyan moving into the ranch, a different group of herders shot renowned author and conservationist Kuki Gallmann at her 100,000-acre Laikipia Nature Conservancy ranch. (She survived).

As soon as Lesiyan and his group drove their cattle in, the ranch owner called the police who launched an operation to drive them out of the vast farm.

“They didn’t listen to us. They started shooting. More than 100 of our cows were confiscated. Three of us were shot and wounded. We were not bothering anyone. We just wanted our cows to have something to eat,” he said.

Lesiyan’s home is dry. The ground looks thirsty. Every step you take kicks up a cloud of dust. Nearby, children play with sand in a dry river bed.

The drainage pattern from the Mt Kenya’s glaciers is radial. Despite this though, all streams eventually end up as tributaries to one of two rivers; The Tana River, that runs tirelessly south and eventually into the Indian Ocean and the more sporadic Ewaso Ng’iro in the country’s eastern lowlands.

“My father tells me when he was young, even elephants could not cross this river. Now our children play in its stomach,” Lesiyan says, looking on at the children playing in the river bed of the Ewaso Ng’iro.

This time next year, Lesiyan might be staring at the same options that sent him north in the first place.

“The pastoralists will continue to have it rough. During the drought, the land remained bare because of overgrazing. When the rains came, all the top soil was washed away in the flash floods, it will take months for grass to grow again and these conflicts will continue,” Francis Karin, a climate change and food security expert said. “And the water from up the mountain no longer trickles down to them.”

He said even the reduced water coming down the mountain is heavily dammed by the nearby farming communities.

“The future of those further downhill looks bleak,” Karin said.

Kalua says the continued melting of the Mt Kenya glacier can only make things worse for the communities living around it.

“We cannot do anything about it,” he says. “It is not our problem. We are not responsible for the massive emissions responsible for global glacial melts. But we are suffering the consequences.”

For Felix Kathune, the consequences are a continual lack of sleep. The redness of his eyes tells the story.

“I have not slept for two days,” he says. “If I do, they will bring their cows and let them loose in our farms,” he says.

He lives in Kathekakai, a village 110km north of Gitaru’s own and right beneath the mountain.

“They are lurking… waiting for us to sleep then bring their cows and goats to eat our cabbages and maize,” he says.

He, like many of his neighbours in nearby Nkothima village, stay awake to prevent members from the neighbouring pastoralist Borana community from feeding their crops to the animals.

“They say their river is dried up and they need to come through our farms to access our river. But when they do this, they set their cows into our farms and we are left with nothing,” he says.

He does not believe that the river the Borana’s used to go to is all dried up.

“They are just pretending. They just want our crops,” he says.

But the River Liki, which stretches from the northern side of the mountain and was traditionally depended on by the Boranas, no longer flows all year round.

“It has now become seasonal. Running for only 8 months of the year,” water manager Kalua said. “It is during these months that conflict between the Meru and Borana communities flares up.”

Before a mountain hiker gets to the fast disappearing glaciers of Mt Kenya, they will go through a succession of distinctive, elevation-based vegetation zones. The grasslands first, then at about 6,000 feet he will meet a ring of dense forest covering the slopes up to about 10,000 feet.

Then the slightly ticklish scent of cedar and yellowwood. From 8,000 feet, with the air getting thinner and thinner, one would walk into a row of bamboo forest that noticeably become shorter as you go higher. At 12,000 feet, a moor. The ground becomes slippery due to the moss and lichen covering the ground. Then at 15,000 feet the glaciers announce their majesty in between bare rock, slate and ice, sitting on top of the mountain like icing on a massive cake.

In 1893, the famous British geologist John W Gregory led the first scientific expedition up Mt Kenya but could not make it past the ice glaciers to reach the summit.

Now, the climb and descent to the highest mountain peak and one of two remaining glacier capped mountains in East and Central Africa takes a total of five days.

“If I were to kneel and pray facing Mt Kenya, my children will think I am growing mad,” Gitaru, the farmer from the little village in Nyeri says. “Very many things have changed in very little time,” says the 73- year- old, the sun setting behind the god of his forefathers, whose disappearance has turned neighbours against one another.