Opposition parties accuse the Kenyatta administration of failing to plan for poor harvests, as inflation bites ahead of an August general election 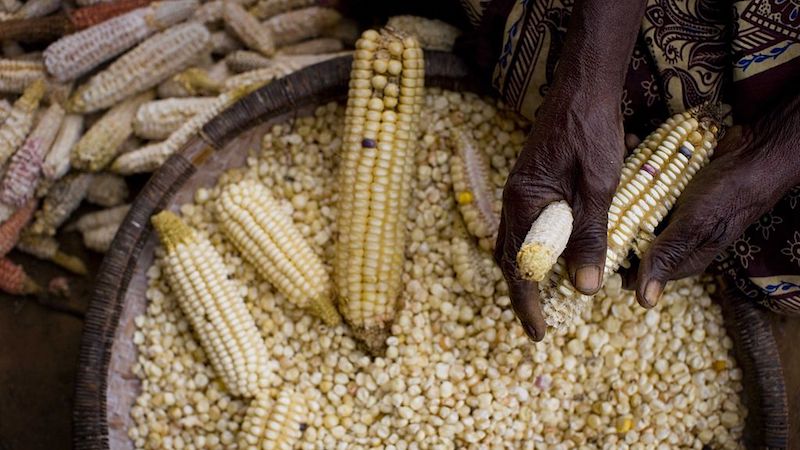 Food price inflation has become a major political issue in Kenya’s general election campaign, in the wake of multiple droughts across East Africa.

Since 2015, Kenya has experienced shortages of the staple food, maize, and other basic commodities such as sugar. The annual food inflation rate stood at 18.6% in March, forcing households to tighten their belts.

President Uhuru Kenyatta’s administration is under pressure over its handling of the food crisis, ahead of the poll on 8 August. Placards saying “unga”, the Swahili word for maize flour, are a common sight at opposition rallies.

Esther Passaris, a candidate from the National Super Alliance (NASA), a coalition of five opposition parties, accused the government of ignoring expert advice.

“Despite the warning that there is going to be a drought, the government continued to allow millers to export the staple food, maize, to neighbouring countries like South Sudan,” she told Climate Home. Neighbouring Uganda and Tanzania, in contrast, suspended maize exports.

Government coffers benefit from taxes on exports, but Kenya paid the price in higher import costs later on, said Passaris. “The government sees food as an opportunity to make money and that’s why it allowed millers to export the maize to South Sudan at high prices, forgetting that its citizens need food.”

In its defence, the ruling Jubilee Party says its subsidies on maize flour are easing the impact on citizens, while building dams for irrigation will boost resilience to drought in the long term.

The government is paying millers a total of 6 billion Kenyan shillings ($58 million) to fix the price of a 2kg bag of maize flour at 90 shillings ($0.87). Due to scarcity, the market price had reached around 140 shillings in May.

“There is a challenge with the distribution because some millers are holding the maize to create scarcity, but the government is working on that,” Jubilee lawmaker Isaac Mwaura told Climate Home.

“The hike in food prices was caused by the prolonged drought which resulted in reduced crop production,” said Mwaura. “However, the opposition has turned it into a political issue by blaming the government for not providing unga to the people.”

Kenneth Okwaroh, director of policy and research at the Africa Centre for the People Institutions and Society (ACEPIS), said drought was the primary cause of inflation, but government had missed an opportunity to mitigate the problem.

“In 2015, the government was warned that production was low and there was an imminent drought,” said Okwaroh. “This would have been a signal to begin early measures to help the market import more maize before the crisis.”

High import levies, poor road infrastructure and trade restrictions do not help the situation, he added.

Humanitarian NGO Oxfam reports a rise in children dropping out of school, prostitution and forced marriage as hunger bites. It is calling for international support to prevent further suffering.

“Not acting now will lead to greater levels of hunger and suffering for vulnerable communities hit hard by drought, climate shocks and other disasters beyond their control,” said Farhiya Ali, acting country director for Oxfam Kenya.

The problem is not limited to Kenya.

“Some regions had a surplus of maize supply, but the challenge comes with transporting stock to other regions – the cost is too high,” said Mrosso.

In some parts of Tanzania, grain prices doubled between December 2016 and April 2017, according to Philbert Nyinondi, country coordinator of the Open Forum for Agriculture Biotechnology.

“However, the trend changed early after harvests in May 2017,” he said. “As of now, food prices are relatively going down.”

According to a report by Action Aid in April, prolonged drought combined with conflict in East Africa has left 16 million people hungry. An estimated 6.2 million Somalians, 5.6m Ethiopians, 4.6m South Sudanese and 2.7m Kenyans are in urgent need of food aid.