Club of Rome president: climate sanctions on US ‘a lovely idea’

“I suspect he is a loser president,” says Ernst Ulrich von Weizsäcker. But conceded trade barrier from the EU were unlikely 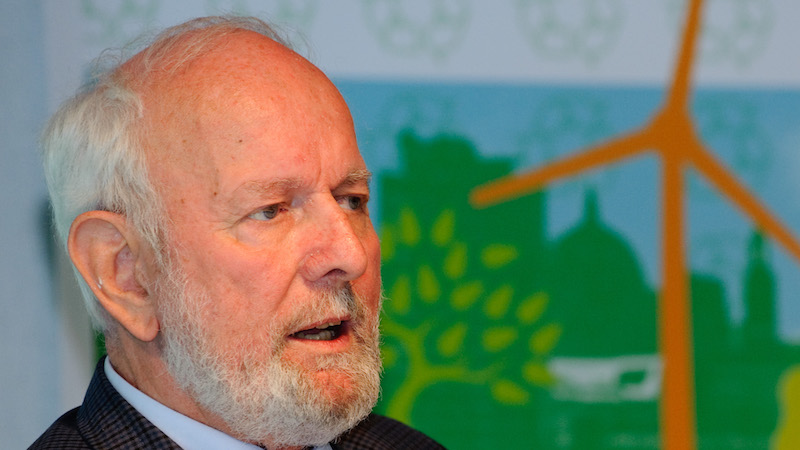 By Arthur Neslen in Toulon

Americans are going to learn the hard way that Donald Trump is a “loser” but carbon taxes against US goods would be “a lovely idea” in the interim, the head of the influential Club of Rome think tank has said.

Speaking a day after the US left the Paris agreement, Ernst Ulrich von Weizsäcker, a former German SPD MP and chair of the Bundestag’s environment committee, described Trump’s move as a self-inflicted wound that put US industry on the losing side of history.

“He did this stupid act because he believes that coal is good, but it is the game-loser – as you can see from the stock market,” Weizsäcker said. “I suspect he is a loser president and Americans are going to learn it the hard way.”

The EU climate commissioner, Miguel Arias Canete, yesterday rejected the notion – first raised by the former French president Nicolas Sarkozy – of imposing sanctions against carbon-intensive US goods that undercut the Paris pact. Weizsäcker though was warm to the notion.

“It would, symbolically, be a lovely idea,” he said. “I don’t know if it is WTO-compatible, and it would be seen by the Trump administration and many Americans as a primitive revenge. It could actually make nationalist feeling in America stronger, not weaker. But I find it a lovely idea.”

The Club of Rome brings together former heads of state, government officials, diplomats, scientists and business leaders to mull issues of climate change and global economy.

The club has spawned its own Bilderberg-style conspiracy meme and is viewed as a “Gaia-worshipping” forum of the global elite by alt-right websites such as Breitbart.

Weizsäcker is an easy target in that regard – a biology professor, best-selling environmental author and nephew of the former German president, Richard von Weizsäcker. But he is no pushover.

Trump’s withdrawal “is so absurd it creates a pre-revolutionary situation, including in America,” he says. “The Californian hi-tech industries will feel extremely frustrated by a president who honours dinosaurs and punishes innovators.

“The friendship between Europe and Asia will be enhanced by Trump’s lonely decision too, because both will immediately realise that he is a fool, and then seek different alliances,” he added.

This is the sunny side of the street leading away from Paris. Weizsäcker airily relates the contents of an email he received from a senior UNFCCC official earlier in the week, expressing a wish that Trump leave the climate process as soon as possible to prevent his nominated delegates sabotaging negotiations any further.

But there is real fear of a global backsliding that could unravel the carefully crafted consensus on trying to limit planetary warming to 2C are difficult to dismiss, given the length of time it took for 196 nations to agree the Paris pact.

“There is a bit of a danger that some ‘fossil governments’ will now feel encouraged to leave the Paris agreement,” Weizsäcker concedes, “but technological trends are moving towards decarbonisation, making the selling of coal from Poland or oil from Saudi Arabia, much less profitable. The rewards such fossil governments expect will be minimal and the penalties will be big. So they will be left behind.”