Comment: The ten-page document affirms, in extraordinarily strong language, that the EU and China intend to make the US irrelevant 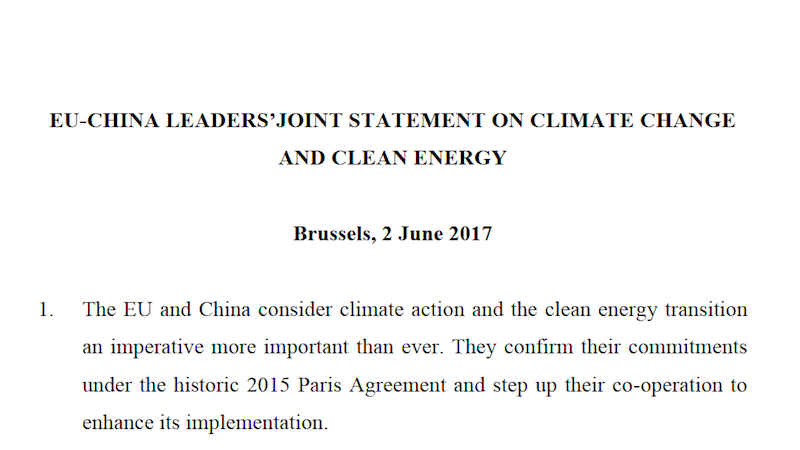 Bilateral summit statements are usually eye-wateringly dull. Annexes to statements – if read at all – are instantly forgotten.

The EU-China joint statement on climate change, to be released after their summit in Brussels today but leaked to Climate Home, is something else entirely.

Using forceful language that is rarely seen in documents of this type, over the course of 10 pages the EU and China set out a cooperation agreement that may shape the course of global climate politics for years to come.

The statement starts with the fundamentals: the prosperity of the EU and of China depends on climate stability. “Climate change is exerting increasing stress on ecosystems and infrastructure to the point of threatening hard-won developmental gains”, they say. “Climate impacts on water, food and national security have become a multiplying factor of social and political fragility, and constitute a root cause for instability, including the displacement of people.”

Climate change is now ‘big league’ politics as a result. For years, climate was a worthy but marginal issue, to be debated by environment ministers rather than by heads of government. The fight over climate at the recent G7 summit in Taormina shows just how far that has changed.

The political significance of the Paris Agreement now goes beyond climate alone to the survival of the multilateral rules-based system itself. The EU and China write: “The Paris Agreement is proof that with shared political will and mutual trust, multilateralism can succeed in building fair and effective solutions to the most critical global problems of our time.”

The EU and China now see climate and clean energy becoming “a main pillar of their bilateral partnership”, including on economic matters.

With the US self-marginalising, the EU and China want to write the rules to the global clean economy (soon to be known simply as “the global economy”). The EU-China statement commits to widespread cooperation in areas such as energy labelling, product efficiency regulations, zero-emissions vehicle rules and clean energy regulation and market design.

If that sounds technical and insignificant, think again. China is the world’s biggest exporter with a fast-growing consumer base; the EU (with its 500 million consumers) is the world’s largest trading block. By cooperating on standards and flexing their regulatory muscles, the EU and China will shape products, markets and supply chains internationally – including in Trump’s America.

The statement also positions the EU and China as a global clean technology innovation lab. Independently of Trump’s decision on the Paris Agreement, he is also seeking to de-fund leading clean innovation programmes such as ARPA-E.

By contrast, the EU and China are re-committing to “Mission Innovation”, a (previously) US-backed initiative to double research and development spending in clean energy – a sign they are ready to not only fill the gap but also take the benefits from clean technology innovation.

EU and China kick off the first ministerial Energy Dialogue focused on clean energy and the implementation of the #ParisAgreement. #EUChina pic.twitter.com/5e1bjYA2Hm

Perhaps most significantly, the EU and China are not just standing by existing commitments under the Paris Agreement, but are proposing to deepen them. Current Paris pledges do not add up to a pathway that will keep the world to ‘well-below 2-degrees’ of warming: they need to be ratcheted up over time.

With an obstructive US administration in place, many have worried that momentum for countries to increase this ambition would be lost. Instead, the EU and China have committed to “forge ahead with further policies” and strengthen ambition, to publish new mid-century decarbonisation plans by 2020 and to agree new goals for climate financing for developing countries through until 2025.

Deep cooperation is proposed across a range of international forums, from the G20 to the Kigali Agreement on HFCs to the UNFCCC – with no mention at all of the US.

They won't be laughing at us anymore pic.twitter.com/4Mzkbnjfqy

When George Bush abandoned the Kyoto Protocol, it led to a lost decade in climate diplomacy. When the red lines of the US and developing countries failed to meet at Copenhagen, it was another 5 years before progress resumed. An agreement between the US and China then laid the groundwork for the Paris Agreement to succeed.

This time round, the EU and China are putting forward a different message: global climate action will proceed with or without the Trump administration on board.

Reports are coming in that the EU and China will not publish a final summit statement due to disagreements over trade. Despite apparent consensus on the widely-trailed EU China leaders’ statement on climate change, the text will not be formally adopted.

Climate change is now firmly in the top level of global politics, and that means the stakes and the risks are higher. Agreement of the climate text became entangled in the broader political relationship, while minor initiatives such as on food labelling were allowed to progress.

The EU and China did, however, announce a new climate summit to be held along with Canada in September. The realignment of the global climate regime continues.

Jonathan Gaventa is a director at the E3G think tank.