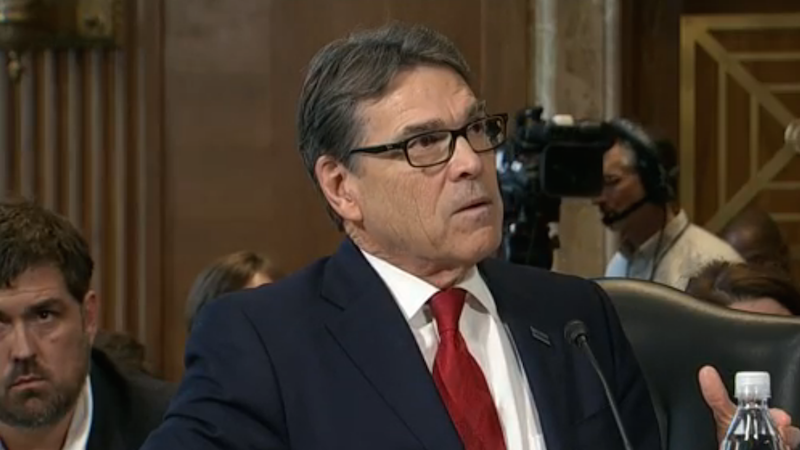 "I am going to protect the men and women of the scientific community," Rick Perry told the senate on Thursday (Screenshot: C-SPAN)

Climate scientists at the Department of Energy would be protected from ideological attack under the leadership of Texas governor Rick Perry.

Perry cut a collegial and moderate figure as he appeared before the Senate Energy and Natural Resources Committee on Thursday, disowning some of his earlier extreme rhetoric.

At the opening, he was reminded archly by the committee’s ranking member Maria Cantwell, a Democrat representing Washington, that he had once advocated the abolition of the department he wants to lead.

Perry said those comments, made during his 2011 presidential campaign, did “not reflect my current thinking” and that he regretted making them.

He later joked, when asked about cuts to major energy efficiency and renewable programmes reported by The Hill on Thursday morning, “maybe they’ll have the same experience I had and forget that they said that”.

Asked about a questionnaire that went out to energy department employees during the early days of the Trump transition requesting, among other things, the names of employees actively involved in the UN climate process, Perry said the request had been sent out before his nomination.

Donald Trump’s transition team have foreshadowed cuts to “politicised” climate research, but Perry said: “I am going to protect the men and women of the scientific community from anyone that would attack them, no matter what their reason may be, at the Department of Energy.” He went on to specify that this included climate scientists.

Perry outlined his views on climate science, echoing those of his would-be cabinet colleagues who have told the senate that they believe the climate is changing and that humans are partly contributing to it. Although, Perry said, how much of the warming we are responsible for and how much we should spend on fixing the problem were matters for debate.

While this diverges from the mainstream view of climate scientists, Perry did offer a commitment to factor the costs of inaction (the damage that will arise from unmitigated carbon emissions) into those calculations.

He most frequently returned to the theme of an all-of-the-above energy strategy. This is a common rhetorical tool used by Democrats and Republicans alike to avoid looking like they favour one type of energy over another.

Cory Gardner just subtly revealed the GOP's true aim at Energy. Says government doesn't have a role in all energy (he means renewables)

Asked to commit to a federal renewable energy target, he said he would not, citing his belief in federalism.

But he also referred to the expansion of wind energy in Texas to become the largest producer in the US during his tenure as governor. This was something trailed by the Trump transition press team in a mail-out during the hearing.

Texas’ wind revolution was also mentioned by president Barack Obama recently as he argued that states would drive growth in renewable energy if the federal government withdrew its support.

Challenged by pro-coal Democrat from West Virginia Joe Manchin to address what he said was an imbalance in the research funding under Obama – three quarters of which went to renewable energy – Perry dodged.

“[I’m] an individual that believes in finding more efficient, more effective, more positive impact on our environment technologies,” he told Manchin. Although he added, “don’t get me confused with the previous administration”.