This is China’s strongest statement yet on climate action 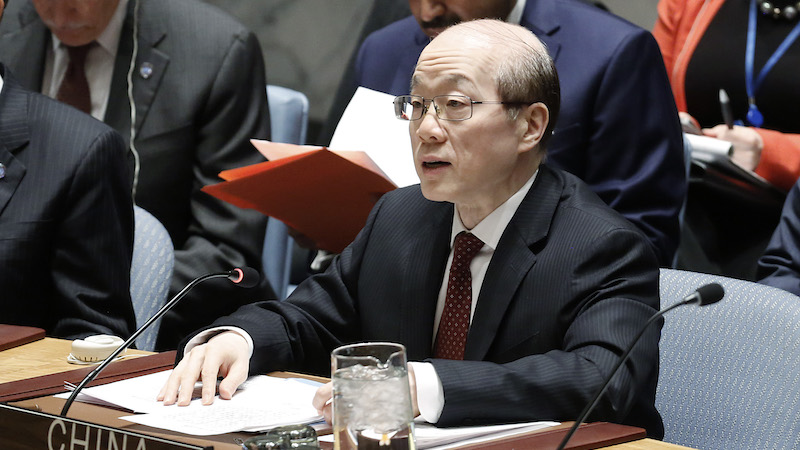 In the week before Donald Trump began to roll back Obama-era climate regulations, China’s government made its clearest statement yet that it sees climate action as central to its best interests.

Speaking at a New York event on 23 March, China’s permanent representative at the UN Liu Jieyi said China remained committed to openness and collaboration on climate change, “whatever the vicissitudes of the international situation”.

Under Barack Obama, the US state department expended huge effort and political capital cajoling the Chinese into a bilateral deal that laid the foundations for the Paris accord on climate change.

One of the pillars of that deal was the Clean Power Plan – which mandated emissions reductions in the US energy sector. On Tuesday, Trump signed an order that began rolling back that policy declaring he was “putting an end to the war on coal”.

But Liu’s comments make clear that China now sees climate action as a matter of national interest, independent of US policy. That applies not only at home, but across a range of diplomatic forums.

“It is worth noting that the permanent mission has a direct line with the leadership, so the piece reflects the high level thinking from Beijing,” he added.

Liu’s speech built on comments made by president Xi Jinping in January, in which the leader affirmed Chinese commitment to global cooperation on a range of issues, including climate change.

Liu ran through his country’s progress on emissions reductions and economic transformation and said that achieving China’s Paris Agreement goal to peak carbon emissions growth between 2025 and 2030 would create 69 million jobs.

In contrast, the Republican party in the US has framed Obama’s climate action plan as a “job killer”.

I thank the UN for convening this meeting to galvanize efforts and build confidence for the drive for green and low-carbon development at the global level. China supports Ecuador’s statement on behalf of the Group of 77 and China. The Paris Agreement and the SDGs adopted in 2015 marked a milestone in our journey towards the protection of mankind’s common home and the establishment of a community of our shared future, and created a roadmap for the realization of that goal. It was extraordinary that the whole process of the adoption, signing, ratification and coming into force of the Paris Agreement was completed within one year, which amply demonstrates the fact that green and low-carbon development has become the general trend of today’s world.

First, consolidate political mutual trust. The principle of “common but differentiated responsibilities” established by the UNFCCC and the Paris Agreement must be upheld. All parties must step up efforts to fulfil their commitments, and developed countries need to make good their pledge of annual contribution of USD100 billion by 2020, thus laying a solid foundation of mutual trust for the implementation of the Paris Agreement.

Thirdly, promote cooperation to achieve win-for-all results. The fundamental way to respond to climate change at the global level lies in cooperation to achieve win-for-all results. In the follow-up negotiations for the implementation of the Paris Agreement, there is a need to create a constructive atmosphere featuring mutual understanding, mutual appreciation, mutual learning and mutual promotion with a view to facilitating the sharing of best practices and pragmatic cooperation.

Fourthly, build incentive mechanisms. There is a need to prompt all parties to keep enhancing the transparency and intensity of their actions, pursue opportunities to develop green financing, encourage technological innovation and, keep a balance between action and support, provide assistance to developing countries to help them build capacity so as to ensure the sustained implementation of the Paris Agreement.

The vision of global green and low-carbon development envisaged by the Paris Agreement corresponds with China’s strategic choice of building an ecological civilization. Whatever the vicissitudes of the international situation, China will remain committed to its development concepts of innovation, coordination, green, openness and sharing and actively respond to climate change. It is both the intrinsic requirement of sustainable development and part of our responsibility of building a community of shared future of mankind.

China remains steadfast in its ambition to reinforce actions in responding to climate change. From 2011 to 2015, China’s carbon intensity decreased by 21.8%, which equals to a reduction of 2.34 billion tons of CO2 emission. In our 13th Five Year Plan, we have set a series of binding targets, including reduction by 18% of carbon intensity and increase of the share of non-fossil energy in primary energy consumption to 15%. China will work relentlessly to save energy, improve energy efficiency, develop renewable energies, expand forest carbon sinks, establish a national market for carbon emissions trading, facilitate low-carbon city development, and promote climate change legislation. All these are part of our vigorous efforts aimed at realizing the goals of reducing carbon intensity by 40-45% in 2020 compared with 2005 and reaching the peak of carbon emissions by 2030 or even earlier. In 2016, China’s carbon intensity fell by 6.6% compared to the previous year, which exceeds by far the planned target of 3.9% reduction. China’s response to climate change has maintained its force and momentum. According to the projection of research institutes in China, the policy measures adopted by China to reach its NDC goals will attract investment of around 41 trillion RMB yuan in areas related to energy saving, environmental protection and green and low-carbon development, and will create jobs for more than 69 million people.

China remains steadfast in its determination to advance global climate governance. China will continue to work with all parties concerned to push for positive progress of the relevant multilateral negotiations. We are preparing “China’s proposals” on issues relating to the implementation of the Paris Agreement such as transparency and global stock taking with a view to finding a “landing point” and a “common denominator” that are within the comfort zone of all sides, reflecting the principle of “common but differentiated responsibilities”, ensuring climate equity, striking a balance between action and support and promoting sharing of best practices. We will fully support Fiji in its efforts to host this year’s conference of states parties and we will push for the production by the conference of a draft for the follow-up negotiations on the implementation of the Paris Agreement, thus laying a good foundation for the conclusion of the negotiations in 2018 as scheduled.

The implementation of the Paris Agreement and the realization of the SDGs should be integrated in order to optimize the effect of coordination. We hope that the UN will mobilize the joint efforts of governments at all levels, enterprises and NGOs of all member states so as to give fresh impetus to the global causes of sustainable development and response to climate change.

Thank you for your attention.