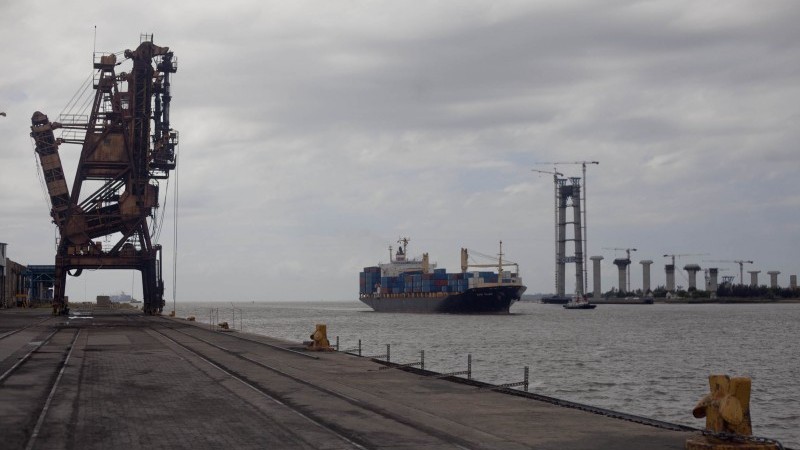 By Sipho Kings in Maputo

In an old warehouse next to the fishing quay of Maputo port, dignitaries and journalists are gathered, in the height of summer, for two hours of speeches. As they swelter in business suits, two-metre high air con units struggle to process the hot, humid air.

The occasion? Mozambique’s capital can now accommodate the largest ocean-going vessels, after a programme of dredging. Previously, such ships would chug on past to South African ports.

“Markets change, economies adjust, new opportunities arise, but if there is something that can always be a source of wealth, it is our privileged access to the sea,” says transport minister Carlos Mesquita.

Today, the hot commodity, stockpiled on a concrete slab here and traded upriver at Matola terminal, is coal – destined to be burned in an Indian power station. Mozambique plans a massive expansion of this export market, despite warnings from government disaster agencies the port may be fuelling its own destruction.

Other speeches hammer home the scale of the transformation. Maputo’s main port, which could only handle 3 million tonnes of cargo a year in 2003, is well on its way to handling 40Mt/yr by 2020. That is after a US$700 million investment in its facilities.

The coal port, a bit further up the Maputo River, has also grown and aims to export 20Mt of coal a year by the same date. A second coal terminal is proposed, with a consortium of Swazi and South African junior miners looking to export 6Mt a year. Citing the “huge untapped market from India,” the miners say they have the rights to ultimately dig up 800Mt of coal.

The goal is simple, according to Mesquita: “To make the Port of Maputo the choice for the export of cargo volumes from Mozambique, South Africa, Swaziland, Zimbabwe and Botswana.”

Under the direst projections, melting ice caps and warming oceans cause sea level rise of 3m this century, overwhelming the port and low-lying business district. “The port and rail facilities will need to be gradually relocated as the water rises,” says an official assessment.

With little space for development on the high ground, a forest of cranes building headquarters for South African financial institutions, Brazilian resource companies and Chinese construction companies works on the low strip of land running next to the water.

“We don’t worry about the water now. The river takes any energy out of storms,” the port’s safety officer tells Climate Home. At high tide, the water is a metre below the top of the quay.

A cement flood barrier, dating back to before independence from Portugal in 1975, lines the river before curving around the coast. On the ocean side of Maputo, fingers of rock and cement jut into the ocean. These provide sanctuary for lovers basking in the cool evenings, and a few times a year they break the force of waves that would otherwise swamp the flood defences.

But even in a low sea level rise scenario, the area will become more exposed to coastal storm surges. Tropical cyclones, which regularly batter Mozambique’s 2,500km coastline, are set to intensify in a warming climate. Storms like Eline, which in 2001 destroyed the homes of 20,000 people in Maputo and killed nearly a thousand people and 40,000 cattle across the country, could come around more often. 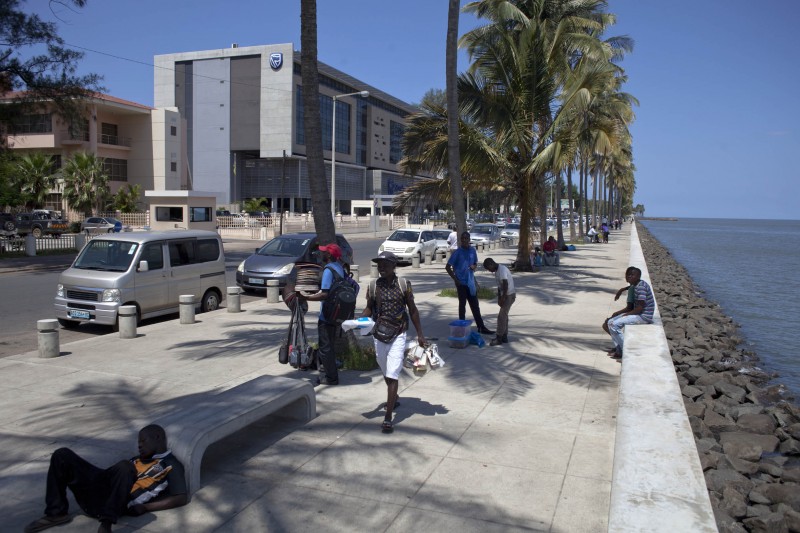 While climate change threatens Mozambique’s development gains, there is little awareness of the role of fossil fuels in causing the threat. “Authorities and churches avoid creating consciousness that climate change is human-induced and hence may be effectively countered by mitigation measures,” says Luis Artur, from Maputo’s Eduardo Mondlane University.

This means a development path which focuses on extractive industries – and exporting coal – can be followed with little opposition. It is a path that favours the needs of elites, with short-term economic development coming at the long-term costs which come with the changing climate, he adds.

Maputo port is one hub of a road and rail network spanning southern Africa. Some trains travel the 1,300km from northern Botswana, changing engines at the Zimbabwe and Mozambique borders, to offload coal at the port. Most come across the South African border, 120km to the west.

On the morning of the port’s launch ceremony, a dozen trains sit at a siding. A pink waybill slip shows they are bringing ferrochrome from Mpumalanga in South Africa. A crane, clattering along on its caterpillar tracks, uses its shovel to nudge them into place before unloading the silver-grey commodity onto trucks. These unload on cement slabs, each the size of a football field and named after Mozambican liberation heroes. Queues of trucks with South African licence plates create a disorganised traffic jam near the rail sidings, jostling to offload first.

“They [countries in the region] say one thing while exploiting their fossil fuel reserves,” says Bobby Peek, of NGO groundWork. His organisation works with communities affected by coal mines and power stations in the region, particularly in Mpumalanga. “It’s madness and short-term thinking at its best. Especially when communities along the entire [Maputo] corridor will be so heavily affected by climate change.”

Maputo port, for its part, in the long term has a goal to move away from exporting fossil fuels as the markets change. India is aiming to end dependence on coal imports in the next few years, while China has halted construction on over a hundred coal-fired power stations as it moves towards renewable energy.

Unlike neighbouring South Africa, Mozambique’s development plan sees more future in valuable minerals like rubies than in coal. But Maputo will still have to prepare for the consequences of a climate shaped by burning the black stuff.

This story was produced with the Mail & Guardian, using funding from the Climate and Development Knowledge Network (CDKN)