The making of Sweden’s climate law – and that photo 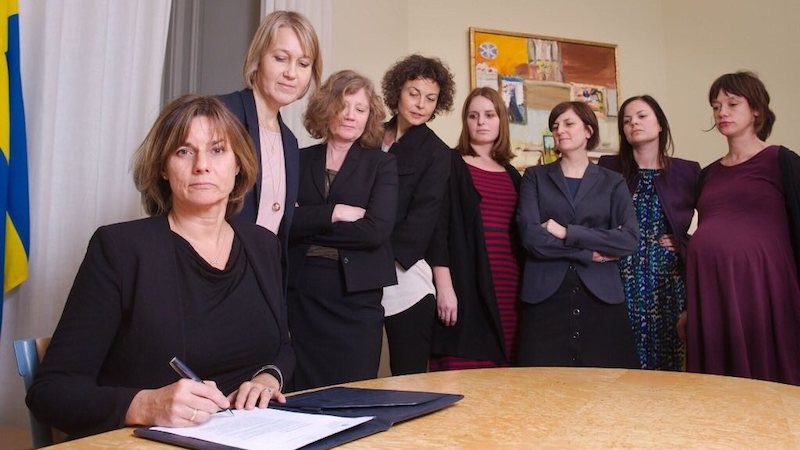 A photo, posted by Sweden's deputy prime minister on Twitter in early February with the caption: "Just signed referral of Swedish #climate law, binding all future governments to net zero emissions by 2045. For a safer and better future". (Photo: Isabella Lovin)

When Sweden’s deputy prime minister Isabella Lövin posted a photo of herself referring one of the world’s most ambitious climate laws to parliament, surrounded by women, it was undeniably provocative.

The parallel with a viral image of US president Donald Trump signing a global gag rule, cutting off funds to organisations that delivered or supported abortions, was obvious. And it was consistent with Lövin’s campaigning to meet an estimated US$600 million global funding shortfall for abortion services left by the US.

On Friday, Trump falsely insinuated there had been a terrorist attack in Sweden – comments he later reframed as general criticism of its migration policy. The exchange highlights a growing antagonism between progressive nations in Europe and the withdrawing US.

Give the public a break – The FAKE NEWS media is trying to say that large scale immigration in Sweden is working out just beautifully. NOT!

Lövin’s office was reluctant to discuss the way she chose to publicise her signing of the bill, saying only her all-women photo reflected Sweden’s “feminist government”. The image made headlines for its thinly-disguised repudiation of Trump’s attacks on women. But perhaps the most defiant anti-Trump message in the photo was the law itself.

In contrast to Trump’s threats to renege on climate US commitments, Sweden is the one industrialised country to have clearly increased its carbon cutting ambition in response to the UN Paris Agreement struck in 2015.

The US has left a climate leadership vacuum that it is up to Europeans to fill, said Lövin, who is also climate minister. The legislation she sent to the Riksdag for approval sets a path to a carbon neutral Sweden by 2045 – an ambitious target with cross-party backing.

Tellingly, Sweden’s climate act was made possible by a coalition of parties from across the political spectrum agreeing to act on climate change. Such a collaboration is unthinkable in the gridlocked politics of the US and the polarisation on which Trump has built his presidency.

Anders Wijkman, lawmaker with Sweden’s centre-right Christian Democrats, was appointed in January 2015 to lead a working group on the potential for a climate law. It was a committee of around 45 people, including representatives of various industries and civil society as well as MPs.

“There was to begin with quite a bit of resistance to the idea of a climate act,” he tells Climate Home. Only the greens and former communists in Sweden’s multi-party system were strongly in favour.

Report: UK emissions have fallen 38% since 1990 on coal closures

Then came a “very decisive” visit to the UK, where a Climate Change Act was passed in 2008 with near-universal backing. The delegation met John Gummer (also known as Lord Deben) and other members of the Committee on Climate Change, an independent body that advises government on sticking to its series of carbon budgets.

“He was very good, because he said that this was not a leftist idea, this in fact came from some of the Tory [conservative] members,” says Wijkman. “That made a lot of impression on my colleagues… we became more and more ambitious in our thinking.”

At the Paris summit itself, leaders set a much tougher threshold for dangerous global warming than many observers expected. On top of agreeing to hold temperature rise below the widely cited 2C limit, they promised to try for 1.5C, in response to determined campaigning from people on the front line of climate impacts.

Immediately after the summit, there were few signs of that high level aspiration translating into tougher national goals. Sweden was an exception. The committee previously had 2050 in mind for carbon neutrality. That was brought forward to 2045.

Wijkman says: “All the members realised: if we really have a chance to meet such an ambitious goal, we need to start doing things more swiftly than we have in the past.” 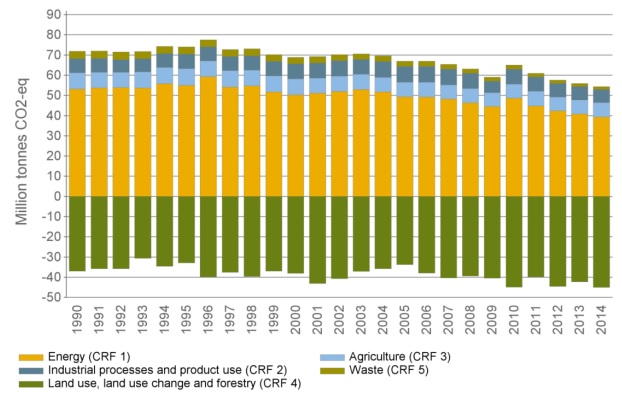 It also got them thinking seriously about the implications of overshooting the 1.5C or even 2C threshold and relying on negative emissions to restabilise the climate. Many scenarios involve burning plant matter and pumping the emissions underground to remove carbon dioxide from the air – technology that does not yet exist at commercial scale.

“You ask yourself: how the hell is that going to happen?” says Wijkman. “Where do we have the land to grow all that biomass that has to be burned for CO2 capture? In order not to be too dependent on negative emissions, we have to hurry up.”

Sweden has some natural advantages in the move to a zero carbon economy: bountiful rivers to drive hydropower turbines and forests to soak up CO2, plus a small population serviced by one of the wealthiest and most developed economies on earth.

The plan is to eliminate every source of greenhouse gases possible – an 85% cut from 1990 levels – with land management expected to offset the remainder.

The bill has its critics. As in other developed countries, heavy industries have warned that decarbonising faster than the rest of the world could drive jobs and investment overseas.

A government-backed initiative to fire up blast furnaces with hydrogen offers the prospect of much greener steel production in time. “This is really an exciting initiative,” Helen Axellson of industry body Jernkontoret tells Climate Home, “but this is something which will probably take 20 years until we have that in industrial functioning.”

Depending on what happens in the rest of the world, she adds: “I think Sweden needs to have some flexibility in the future to perhaps reconsider the target.”

Among the four centre-right parties, which were in government before 2014, there was some sympathy with those concerns. But according to Wijkman, they united behind the target in the hopes of forming a winning coalition at the next election.

“I don’t think all of them were entirely happy about the proposals we agreed upon, but they couldn’t be seen as split on such an important issue,” he says.

Having been through this extensive consultation, the bill is expected to get through parliament ready to come into effect at the start of 2018.

Some commentators thought Lövin had been “unwise” to provoke the US president, recognises Wijkman, but it reflected the national mood: “We had a lot of reaction when we saw Trump sitting in front of seven middle-aged men, signing the executive order. What the hell do these men know about reproductive health and about women’s needs? It was a very, very upsetting photo that went viral as well, so this was a reaction.”