Comment: Conservatives are committed to science-based public policy on the environment, but for too long their voice has been ignored by civil society 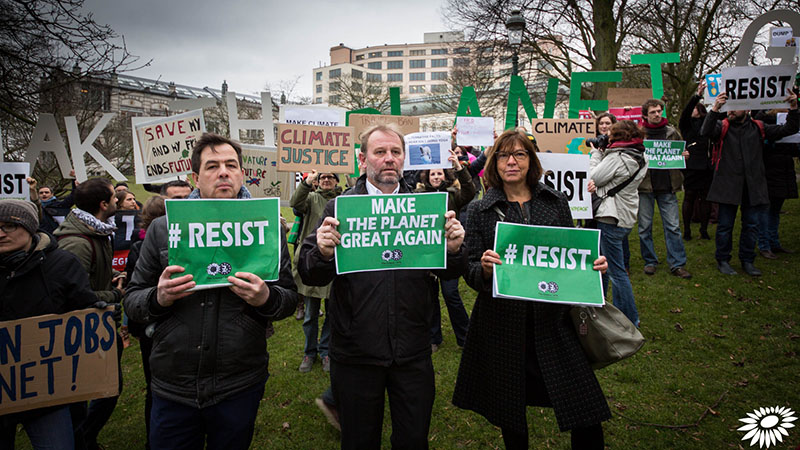 Members of the European Greens protesting at the appearance of ex-Trump advisor and climate denier Myron Ebell at the Blue-Green conference (Pic: European Greens/Flickr)

I write this travelling back from Brussels, a journey the UK will metaphorically make in just a few years time.

Brexit has created a dynamic debate about how we organise environment policy from here on. The UK will regain competencies it has not had for many years (and with them, the force of public pressure to act).

It will also have the opportunity to replace a traditionally prescriptive EU law with outcome-focused, enabling, UK law and policy.

So it was fascinating to be in Brussels for the BlueGreen conference laid on by the Association of Conservative and Reformists in Europe (ACRE) under the leadership of Dan Hannan MEP. (Not to be confused with the New Zealand’s National Party BlueGreens).

The conference has probably been most famous amongst the climatati for the attendance of Myron Ebell. But to focus on this obscures the some of the underlying difference and debate within the conservative movement.

Well done @Greenpeace for standing up to #Myron Ebell I hope to get my chance shortly! #BlueGreenSummit pic.twitter.com/pUvAScyY3o

What did I learn from the conference? Well first, there is a solid commitment to science-based public policy.

All panellists, whether you agreed with them or not, were interested in and cited data on environmental outcomes. Whilst the climate debate didn’t actually come up much, Lord Barker (no relation!) made an impassioned defence of scientific expertise (remember Margaret Thatcher’s support for the IPCC).

(Lord) Greg Barker, Michael Liebreich, Ian Duncan MEP and others were all booed as ‘climate deniers’ by the mob outside, an assertion as wrong as it is ignorant.

As Zac Goldsmith has argued, until true environmentalists work with the conservative coalition, bad and marginal policy will be the order of the day. (For more on this see this Niskanen Centre blog, itself run by a former Competitive Enterprise Instituter).

Michael Liebreich perhaps hit the nail on the head when he said ‘I have been called a fully paid up member of the Green Blob, and (by US climate scientist Michael Mann no less) a climate denier. That terminology makes no contribution to intellectual debate.’

A neglect of conservative policy tools by the environmental movement has seen it (a) make bad policy and (b) lose its place in the conservative coalition (most notably the US).

Property rights, the rule of law, free markets and through them innovation, can help deliver. As Paris found over Copenhagen, a pragmatic, bottom-up ratchet works: a top-town target driven negotiation fails.

Third, whatever happens on the fringes, the main argument between Conservatives and the left is whether growth is the problem or the solution, not whether environmental challenges should be met or ignored.

Michael Liebreich scotched the false dichotomy of ‘de-growth vs externality-heavy growth’. He argued (a) the earth is not a closed system (because of solar energy) and (b) that with inexhaustible energy (now coming in at 3 cents in Morocco), waste can be constantly recycled (or, entropy can be reversed).

Again, Margaret Thatcher’s insight, echoed by Matt Ridley and Dan Hannan, was that growth/wealth and environmental protection correlate, that is an inescapable human reality. But as the great lady said ‘it must be growth that does not plunder the planet today’.

The UK Conservative government has been consistent and clear on its position.

Boris Johnson assured Parliament that the Government will “use our influence to help the US see it’s responsibilities” on climate change, and the Paris Climate agreement has support from figures across the cabinet ranging from Philip Hammond, Greg Clark, Andrea Leadsom, Amber Rudd, Nick Hurd, Ben Gummer and more.

Yes, Myron Ebell visited Number 10: that speaks more to their very sensible desire to build any bridges with the Trump administration they can, than to their reflections on policy.

What did I make of Myron Ebell? He was polite, informed & compelling. I envied his suit + cowboy boots. I agreed with him that property rights, free markets, and the rule of law have been neglected policy tools. I hope one day he might apply these principles to carbon.

It was clear he had moved on from the transition planning team. Whatever that planning might have been, Trump seems happy to back his people (cf James Mattis on torture). As Elon Musk said last week, Rex Tillerson is committed to a carbon tax.

Conservatives are a varied bunch. Things are all to play for.

Sam Barker is Director of the Conservative Environment Network, if you want to catch up on the conference, he live-tweeted it @repairinglease