As Uttar Pradesh lags its target for solar installations, female-led Ambar Mosque calls on everyone to do their bit for air quality and energy access 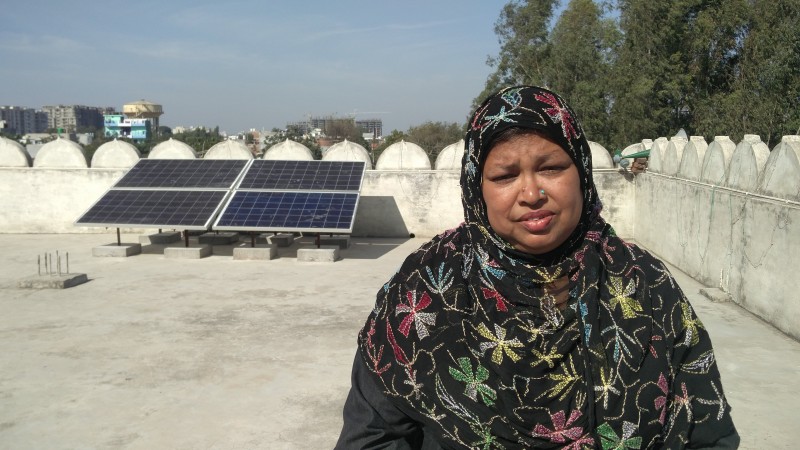 Set up 20 years ago in a remote corner of Lucknow, Ambar Mosque is known for promoting women’s rights and putting up visitors to a nearby hospital.

Now the female-led faith centre – where women pray alongside men – is installing solar panels to set an example of clean energy in Uttar Pradesh, a state lagging behind its targets.

At 1kW, the system generates a fraction the electricity of the coal plants that dominate India’s power mix. But it is expected to meet three quarters of the mosque’s modest lighting and cooling needs – and its founder hopes to inspire others.

“Over the last few years, air quality in the city has become worse while rural areas of Uttar Pradesh have been suffering frequent power cuts,” said Shaista Ambar.

“We must all do our bit… If everyone starts using solar energy then Lucknow’s air quality will start to improve as well as reduce power cuts.”

Narendra Modi’s government aims to install 100GW of solar panels across India by 2022, to light up more homes and reduce reliance on polluting coal.

The technology can increasingly compete on cost with new coal plants, albeit on a smaller scale, where the policy, network and financing conditions are right.

Uttar Pradesh, India’s most populous state, is only 13% of the way to an interim goal of 1.8GW solar capacity by March 2017, according to analysis firm Equatorials.

Energy access tops the list of concerns for UP voters, with 38% experiencing daily power cuts, a poll this month by FourthLion shows. The same survey found 87% were willing to use energy from the sun if it would curb air pollution.

Lack of information is another barrier to take-up. 8minutes gifted the 79,000 rupees (US$1,200) solar package to Ambar Mosque in a bid to spread awareness.

“We are trying to incentivise people to switch to solar and we wanted to use this case as a model for the community,” said Srihari.