Obama’s climate legacy: a battle of attrition at home

In the first of a three-part series, Climate Home looks at Barack Obama’s domestic record on one of his top priority issues 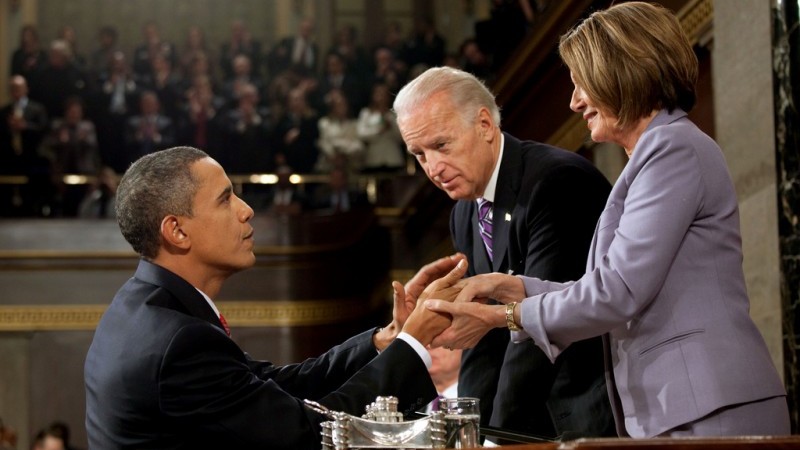 President Barack Obama shakes hands with Vice President Joe Biden and Speaker of the House Nancy Pelosi at the conclusion of his State of the Union address, 2010 (Official White House Photo by Pete Souza)

“Without bolder action, our children won’t have time to debate the existence of climate change; they’ll be busy dealing with its effects.”

As Barack Obama said goodbye to the White House on 10 January, he returned to a theme that came to dominate his presidency, in particular the second term.

More than any of his forebears, he aspired to curb greenhouse gas emissions and leave a safer environment for future generations.

Did he deliver on the rhetoric? In the first of a three-part series, Climate Home examines his record on home turf. The second will look at his influence abroad and the third ask how durable Obama’s legacy is as Donald Trump takes power.

Judged purely on the basis of tonnes of carbon dioxide (or their equivalent), Obama’s record is none too radical. The latest Environmental Protection Agency data shows across the economy, emissions fell by 4.7% between 2008 and 2014, with a little help from the financial crisis.

For a rough comparison (there may be methodological differences), the European Environment Agency recorded a 14.7% drop over the same period across the 28 EU member states.

There is a lag between policies and results, of course, and Obama attempted some major clean economy reforms. But his two flagship initiatives came a cropper on Republican opposition.

The first, a bill to bring in every economist’s favourite climate solution, cap-and-trade, died a death in the senate. Despite having a Democrat-controlled House 2009-11, a luxury he would never get back, Obama struggled to get through an economic stimulus package and healthcare reforms. Climate change fell by the wayside.

The second, his clean power plan, is snarled up in lawsuits. Obama used executive powers to bypass Congress in slapping restrictions on dirty power plants, but courtroom challenges have placed it in limbo. 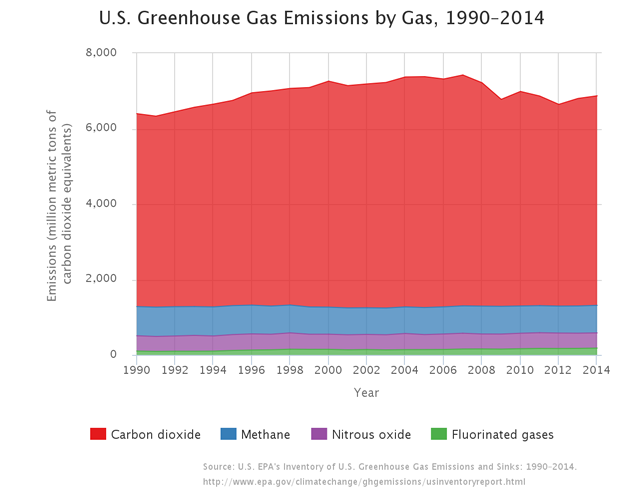 Pete Ogden, now at the Center for American Progress, worked on climate in the Obama administration between 2009 and 2014. “If you look back over the years, it has not been one big elegant solution, it has been continuous attempts to move in the right direction,” he says.

There’s more than one way to skin a cat, Obama said in 2010 after the carbon market scheme flopped. It was not until 2013, in an address to students at Georgetown University, that he set out a fully formed feline-flaying alternative.

He would use the Clean Air Act 1970 – signed into law, he stressed, by a Republican president – to bring in regulations on climate pollution. He would work with businesses and states to promote clean energy. And he put adaptation on the agenda, citing the impacts sea level rise was already having on parts of the country like Florida and coastal New York.

“I refuse to condemn your generation and future generations to a planet that’s beyond fixing,” he told them.

With no more elections to fight, Obama indulged his inner policy wonk. He issued executive orders to weave climate considerations into decisions on everything from urban planning to national security. Agencies were sent on a rule-making spree.

The clean power plan was the centrepiece. Politically, it hit a wall, with opponents labelling it a “war on coal” and 27 states seeking to block it through the courts.

In practice, a shale gas boom did half the work of driving coal off the system before any federal intervention. Analysis commissioned by the Environmental Defense Fund showed 22 of the litigating states could meet the policy’s 2030 targets through investments that were already planned.

“The policy framework has worked with and encouraged and complemented those market trends,” says Nat Keohane, vice president at EDF. “We have seen a real shift over the last eight years onto a new lower carbon trajectory of our energy system. That is not to say the work is done, because we need to accelerate that shift.”

Below the radar, a multitude of energy efficiency standards are quietly shrinking America’s outsized carbon footprint. 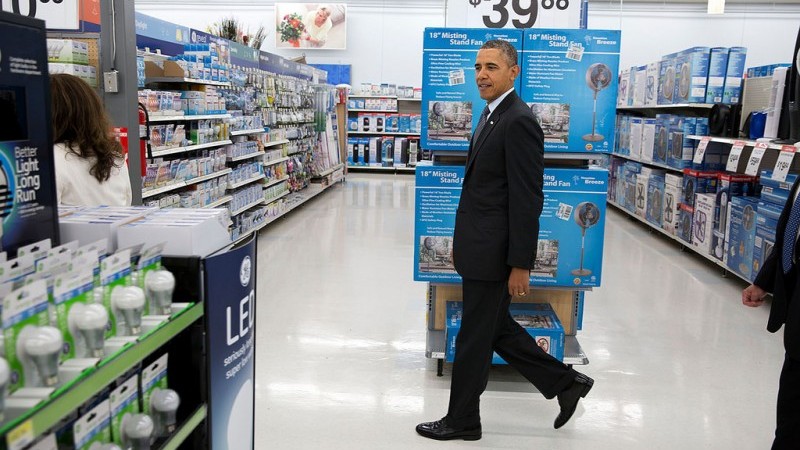 Having long irritated deep greens with his “all-of-the-above” energy policy, Obama also made tentative steps towards constraining fossil fuel supplies. Nationally and internationally, climate policies tend to focus on where coal, oil and gas are burned, not where they are extracted. Yet energy companies mine and drill like there is no tomorrow, their business plans incompatible with “safe” limits on global warming.

While this was not something Obama systematically addressed, decisions like a coal mine moratorium on public lands showed some sympathy with the keep-it-in-the-ground argument. In 2015 he vetoed the Keystone XL oil pipeline, a rallying issue for campaigners, on climate grounds.

To Bill McKibben, writer and co-founder of 350 activist network, it was the most significant decision Obama ever made, “the one place where he actually stood up to the oil and gas industry”.

Meanwhile, he used the bully pulpit to try and bring climate change home to Americans. The impacts of rapid warming were front and centre of a 2015 visit to Alaska; in California, he warned droughts like that experienced in recent years would become more common.

Jacqueline Patterson, climate lead at the National Association for the Advancement of Colored People, welcomed his attention to those communities – often black, latino or indigenous – on the front lines of both climate impacts and health threats from polluting industries. That awareness wasn’t always incorporated into the way policy was made, she adds. 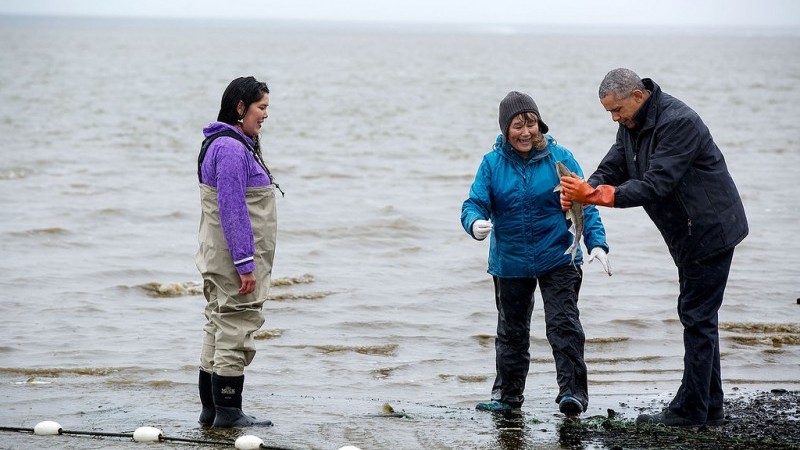 “In some of his speeches, he really did speak well to impacts on vulnerable communities and speak with some degree of depth of understanding of those impacts. There was a level of sensitivity there. But I do think that it is well known that some of those pieces of legislation were pretty much authored my some of these big green organisations and their flaws were reflective of that.”

And Obama’s carefully crafted rhetoric did not transcend a bipartisan split that only widened during his presidency. Less than half of respondents accepted the scientific consensus that human activity is the main driver of climate change in a Pew survey last October. While Democrats lean in favour of action, scepticism is an ingrained part of Republican identity.

“We tried to change the outreach and messaging in rural America in a number of ways, but… has it changed the rhetoric that people hear? It hasn’t,” Environment chief Gina McCarthy told Reuters. 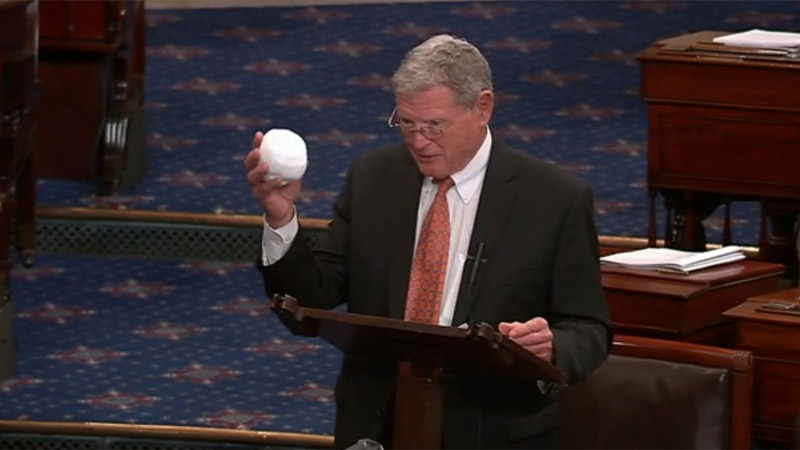 While some Republican lawmakers may privately accept that climate change is a threat, saying so publicly has become career suicide. Just ask former senator Bob Inglis.

His Democrat counterpart Sheldon Whitehouse blames a 2010 Supreme Court decision to reject limits on corporate donations to politicians. The largesse of big oil, he writes in the Washington Post, has “quashed any Republican effort on climate change, silenced serious climate debate in Congress and ended progress”.

After attempts to reach across the divide early in his presidency met blanket opposition, Obama more or less gave up on Congress. Instead, he pushed ahead where he could using executive orders – right up to the last minute.

In mid-December, Climate Home reported on Obama’s “last climate play”, a ban on Arctic and Atlantic oil drilling, because he didn’t have time for any more, right? Wrong. During the usually fallow period between Christmas and New Year, his energy department announced five more efficiency rules.

As we will explore in the third of this series, those gains are vulnerable under Trump. Obama’s failure to build a broader support base for climate policies could come back to bite.