Green Climate Fund misses 2016 target as US donation in doubt

Board celebrates approval of projects worth $1.3bn at meeting in Samoa, but falls short of $2.5bn goal and delays key policy decisions 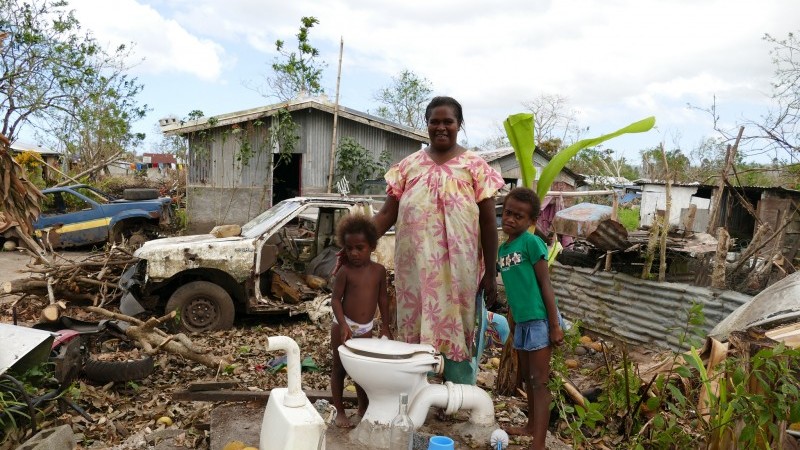 Vanuatu in the aftermath of Cyclone Pam. Pacific islands are increasingly vulnerable to tropical storms in a warming world (Photo: UNDP/Silke von Brockhausen)

The Green Climate Fund board approved eight funding proposals worth US$315 million as a meeting in Samoa concluded on Friday.

It brings the total allocated by the UN’s flagship climate finance initiative in 2016 to $1.3 billion, far short of a $2.5bn aspirational goal.

Looming over the fund is a threat by US president-elect Donald Trump to axe an outstanding pledge that accounts for nearly a quarter of the $10bn starting capital.

Green Climate Fund Board meeting in Samoa approved US$315m in new activities – but little talk about the -$2bn elephant in the room. #GCFund pic.twitter.com/3Hufe8uk6T

Co-chairs of the board hailed the meeting a success. “This year has demonstrated that the fund is rapidly gathering pace with regard to scaling up climate finance,” said Zaheer Fakir, of South Africa.

“I am proud of the progress we have made over the past 12 months in improving fund performance and growing our portfolio of investments.”

His Australian colleague Ewan McDonald highlighted the $98m for Pacific island states, at the board’s first ever meeting in the region.

Host nation Samoa got $57.7m for flood management in the Vaisigano River catchment; cyclone-ravaged Vanuatu got $23m for information services and the Cook Islands got the first $17m tranche of a renewable energy investment programme.

“I have high hopes that 2017 will be the year of climate finance for the Pacific,” said McDonald.

Civil society observers were less impressed, pointing to policy decisions that had been kicked down the road.

David Eckstein, policy advisor at NGO Germanwatch, tweeted that no country ownership guidelines, simplified approval process or 2017 work plan had been agreed. The complexity of applying for funds is seen as a barrier to some of the poorest and most vulnerable countries.

Saudi Arabia doesn’t want fossil fuels excluded at #GCFund. Does he know he’s on a board tasked w/stopping climate change, not causing it?

Six years after it formed, the fund is under pressure to deliver on its promise to back transformational projects, with equal weight given to cutting emissions and protecting people from the unavoidable impacts of climate change.

Bangladeshi expert Saleemul Huq wrote for Climate Home that the body was not fit for purpose, with too much paperwork and not enough money reaching those who needed it.

He proposed a radical overhaul, giving national governments control over spending and rigorously monitoring the results to learn what worked.