So the Paris climate deal enters into force: then what?

UPDATED 4/10: Excitement is building over the likely entry into force of the UN’s climate deal – but that will only be the start of a new set of tricky negotiations 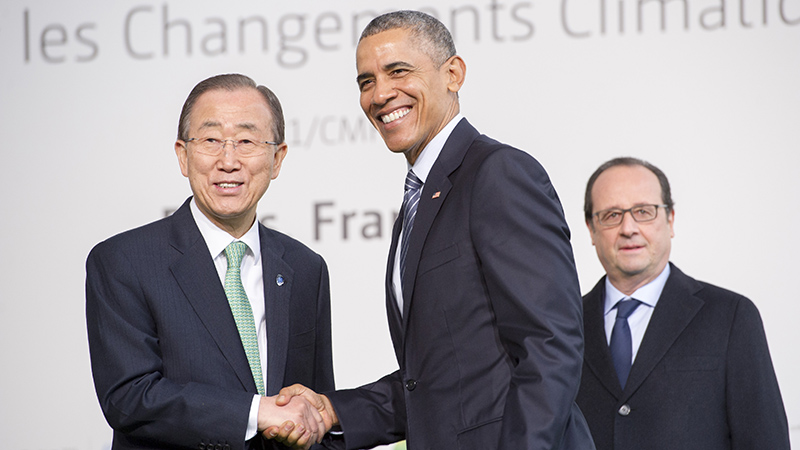 Ratification of the first major emissions-busting climate treaty the UN managed to deliver took seven years and left the world’s top two carbon polluters with a free pass to burn all the oil, coal and gas they wanted.

When the Paris climate agreement, the successor to the Kyoto Protocol, comes into force, it will have taken around 10 months to ratify and will account for the majority of emissions from countries.

Far from dodging the carbon bullet, this was a deal the US and China helped develop. Dwell on that for a second. In diplomatic terms through 2016 we’ve seen the UN hit warp-speed, taking nearly 200 countries with it.

With the EU’s formal ratification in the first week of October that means the twin threshold of 55 countries accounting for 55% of emissions have been met.

Once branded the UN’s ‘2020 climate deal’, the Paris pact has smashed diplomatic norms and turned the idea that countries cannot work together on climate change on its head.

We continue to work with China on opportunities to #ActonClimate. Leaving Beijing after two days of meetings. pic.twitter.com/9VczEl7zIA

Once the ratification threshold of 55 countries covering 55% of greenhouse gas emissions is passed, it will take 30 days for the deal to become UN law and effectively a new treaty.

By my calculations that means it will go live the day before the 2016 UN climate summit in Marrakech opens for business.

The mere fact of entry into force is significant on a number of levels. For one, no-one thought it would be this fast when the deal was struck last December.

“The general thinking at that time was at that time it would come into force in 2020,” said the deputy chief of the UN’s climate body Richard Kinley. “We are now poised to see the agreement come into effect this year.”

This initial success will be a proverbial two fingers from the UN to doubters who thought it wouldn’t happen, and to one of the Big Apple’s most famous residents: Donald Trump.

If elected president in November he says he will scrap the deal. In reality he can probably wreck US low carbon plans, but once Barack Obama formally joins, the US is legally bound to the pact for four years.

Decoding the deal: What does the Paris pact actually mean?

The political momentum generated by entry into force will also boost confidence the world is moving in a greener direction.

It’s hard to put a specific value on a feeling, but try this: in August investors controlling over $13 trillion in funds said ratification would offer a “clear signal” to the business community that a “low-carbon, clean energy economy is inevitable”.

And it raises the stakes for the private sector to adjust, as Bank of England governor Mark Carney explained in a recent speech: “By bringing forward the horizon, it puts a premium on the ability of private markets to adjust.”

Political messaging is important, but the practical realities of the Paris agreement going live are less exciting. So hold your horses. Not everyone will have formally joined the new pact.

Russia appears curiously silent on ratification, the Philippines eccentric president Rodrigo Duterte has threatened to pull out. Many African and Middle East countries also appear to be taking their time to sign up.

In an attempt to assuage concerns, a ‘reflections note’ from Morocco’s environment minister Hakima El Haite and France’s climate envoy Laurence Tubiana earlier this year indicated these laggards won’t be excluded as a result.

“We consider that no Party should be disadvantaged or excluded from the collective development of the rulebook of the Paris Agreement simply because it is still in the process of joining the Agreement,” they said.

The likely outcome is that the first official session of the Paris Agreement, known as CMA1 in UN jargon, will be opened and swiftly closed. As the world heats, the deal will be placed on ice.

“It puts us in a slightly tricky situation, as the APA [round of talks on working out rules for the new deal] has just been established,” said Jo Tyndall, a New Zealand diplomat who is co-chair of the talks.

“It is just simply not realistic to expect everything can be concluded so we can fulfil mandate to CMA1.”

That’s because talks on how it will work only started in May, and diplomats face a workload that many assumed they would have 5 years to complete.

Of these the UN identifies 24 that have to be completed before the Paris agreement can function.

Many sound fairly simple but there are already signs of differences between developed and developing countries over how they will be crafted and what leeway poorer nations will get.

Four stand out – although they are by no means the only important jobs facing negotiators:

-How will the 2018 global review into climate targets and plans work?
-What level of support will developing countries get pre-2020?
-Will a new transparency mechanism cover developed and developing countries?
-Who will write the rules for carbon markets under the Paris deal?

On the last point, one consultant working with countries on the development of market mechanisms reckons it’s unlikely they could agree rules before 2018.

Little was accomplished at UN talks in May, they added, and few governments have thought about how an emissions mitigation mechanism might work in practice.

Separately, it’s an open secret that many developing countries require help delivering on their climate plans and ensuring they are adequately financed. Organisations like CDKN are helping build capacity across Africa and Latin America, but progress has been slow.

At a recent event in London hosted by CDKN one African negotiator spoke of his frustration at the lack of support poorer countries had received since Paris to help deliver on its aspirations.

Remember some of the plans (INDCs) submitted last year were just a few pages: from that they now need to build a national industrial strategy that can endure for decades, and pass laws like the UK’s 2008 Climate Change Act.

In an interview with Climate Home earlier this summer, Tubiana suggested 2018 could be the “real deadline to finish preparations” and ensure all countries are ratified and on board.

With a new IPCC climate science study into dangers posed by 1.5C of global warming due the same year, many hope 2018 could be the moment for a renewed and tougher set of climate targets.

To that end, the key goal for COP22, the year’s main UN climate summit in Marrakech, is to develop a roadmap for future talks and the development of a treaty rulebook in the coming 24 months.

Should ratification become reality, it will be the start of a new journey and one that will not immediately deliver results, a fact many may find frustrating given the record global temperatures seen through 2016.

For her part Tyndall, whose job it will be to marshall nearly 200 countries in November alongside her Saudi Arabian co-chair, remains confident the process can deliver, despite the tight timeline.

“We have proven that it can be done and it will be done,” she said. “The point I would make is that in every meeting since Paris at ministerial level or senior officials the political momentum and strong buy-in from the Paris outcome has remained very clear.”

ANALYSIS: Where will emission cuts come from before Paris goes live?