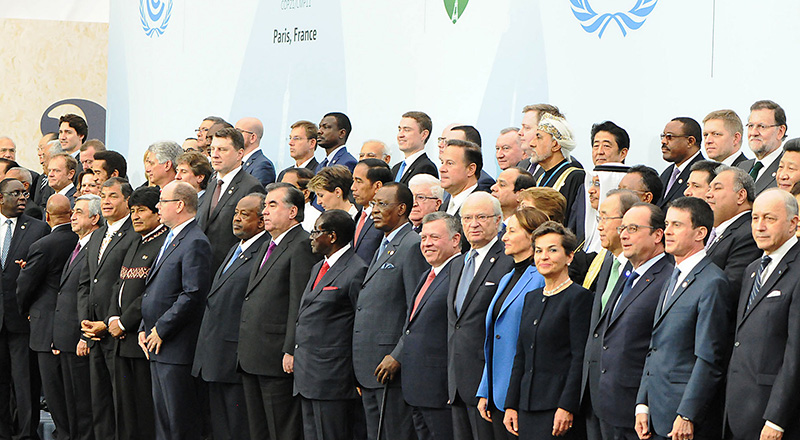 World leaders line up at the start of the 2015 Paris climate summit - but financial support for the process has dried up (Pic: UNFCCC)

Negotiators for poor countries often say they are at a disadvantage at UN summits, lacking the numbers, technology and institutional support of richer countries.

For example, at the latest round of UN climate talks in Bonn in May, Bangladesh sent 4 officials, Burkina Faso 3, Ethiopia 5 and Uruguay 6 compared to 25 for the UK,  31 for the European Commission, 58 for Japan and 44 for the US.

At the Paris climate talks in December 2015, I met a diplomat from Botswana who said he had to cover four sets of complex negotiations on his own.

These could have ranged from carbon market provisions and finance flows to the specifics of a new climate action reporting system. By the end of the meeting he looked half dead.

Poorer countries traditionally receive support from the UN to bring extra negotiators, allowing them to cover these myriad negotiating streams of the global talks.

Funds for @UNFCCC pot to help support envoys from developing countries are down… a lot pic.twitter.com/WdM334dYWW

As you can see from the tweet above, that funding is drying up. In an email to Climate Home, the UN climate body’s head of communications Nick Nuttall explains what’s happening:

“There are perhaps several reasons for this, but certainly it is true that many donor governments around the world are facing difficult budgetary conditions domestically—and this is perhaps reflected in the fact that all international organizations are finding budgets constrained or diminishing.

“We are currently able to support participation from one delegate from each eligible Party–instead of the traditional 2– plus an additional delegate from Least Developed Countries and Small Island Developing States.

“We hope that payment of some pledged contributions will allow us to increase the number of participants that can be supported but we will have to wait and see.

“In respect to COP22 in Morocco, we do not anticipate any significant issues except in the area of participation—but we are confident that there will be 15-20,000 participants in Marrakech and there will be a full programme of negotiations and events.”

It’s possible – as Nuttall explains – there may be a surge in contributions, but it raises questions over how well represented poorer nations will be at November’s climate summit in Marrakech.

That’s a critical moment, given in Morocco countries will start developing the rules for the Paris climate agreement, which may or may not have entered into force by the time it starts.

It’s worth observing that we drew on delegation numbers for the UN talks in May as this is a more accurate representation of the numbers of working officials who attend the negotiations.

The vast sizes of some country registrations are curious and potentially a little misleading – not everyone on these lists will have been active participants in the talks.

Guinea for instance apparently had 398 officials in Paris, Cote D’Ivoire 338 and Cameroon 216.

I attended many press conferences and side events over the two weeks in Paris and cannot recall meeting delegates from any of those countries – though there may have been a few hidden away. In Bonn this May, Guinea and Cote D’Ivoire had 2 delegates. Cameroon sent 4.

It’s remarkable that Burkina Faso apparently sent 256 official to Paris; it’s equally possible that some people with government connections used the visa-waiver guaranteed by accreditation to take a holiday. The largest seven African delegations were from French-speaking nations.

There is – I should add – no suggestion the UN would have funded these delegates. Countries are allowed to take as many as they want on their “lists”, with no questions asked. The extra funding is to help 1-2 working government officials travel.

For context, in Paris the UK sent 96 diplomats (25 in Bonn) and Germany 114 (61 in Bonn), suggesting that it’s typical for official numbers to rise by at least 50% if not more for the annual meet.

If you want more granular data, the Carbon Brief website has quite a cool map of where delegates came from.