London calling: Figueres dives back into climate after UN bid 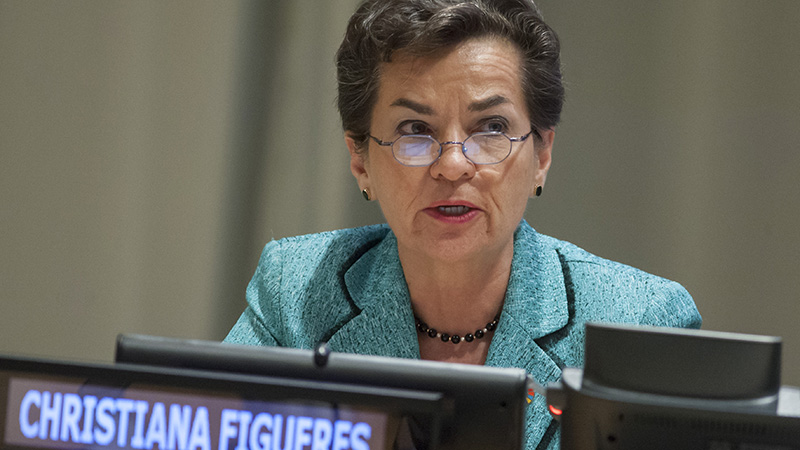 The UN’s former climate chief does not appear to do holidays.

Fresh from quitting what is becoming an increasingly brutal race to replace Ban Ki-moon as UN secretary general, Christiana Figueres is back with a new project: Mission 2020.

City leaders, bankers and the burgeoning climate philanthropy sector can expect calls in the coming weeks and months as the Costa Rican gets to work.

Watching the Paris climate deal meet its first threshold of support from more than 55 countries filled her with “gratitude” she says, but also underlined a gnawing sense of urgency felt by many governments in developing countries. Eight months on from Paris some are asking: what has changed?

Figueres plans to work with cities on standardising emissions data, corporate giants on investing in renewables and says she will target major charities and philanthropies to stump up more cash.

A sign this is already happening came last week, with 19 foundations including Bill Gates, Tom Steyer and the Children’s Investment Fund Foundation (CIFF) pledging $53 million for developing countries to invest in energy efficiency.

“I do think there’s an important role for philanthropic finance in next five years to come into the climate space more than we have seen before. We are in a transition stage and philanthropies can play a critical role,” she says.

Staffed with former UN colleagues and boasting Newton Investment Management chief executive Helena Morrissey as one of five advisory board members, Mission 2020 will be based in London.

After the Brexit referendum and with UK climate and energy policy in a state of flux it seems a curious choice for an HQ, but Figueres cites the city’s rich seam of climate policy and finance expertise.

Last week she was spotted talking to new UK climate minister Nick Hurd and longtime climate advocate Kate Hampton, CEO of the Mayfair-based CIFF, which is valued at £2 billion.

While the Bonn-based UN climate convention corrals more countries into ratifying the pact and starts work on a rulebook for the agreement, it’s clear that will not stop dangerous warming.

Markets and cash flows are still moving too slowly, says Figueres, with a much-hyped green bond market far from diverting capital flows away from high-carbon projects.

Crashing auction prices for solar farms in the Middle East, Peru and Chile “beat the pants” off fossil fuels she argues, but the required renewables paradigm shift has not happened yet.

“Clean energy investments are still hovering around $300bn when that should be growing exponentially,” she says.

“Mainly that’s because we have not figured how to use public funds to de-risk projects – and it’s that blended finance piece we are still struggling with.”

It’s worth noting she’s far from alone in this belief. On 22 September Bank of England governor Mark Carney said green finance is still a “niche interest” and requires public and private sector collaboration to boost flows.

That’s a real problem for many developing countries faced with populations demanding better access to power for their mobile phones, computers and basic amenities others take for granted.

Policy frameworks and the raft of woolly investment plans presented ahead of last December’s Paris summit are still not up to speed – due in part to a lack of in-country expertise and funding.

Nor is the much-vaunted Green Climate Fund ready to fill this gap, beset as it is by internal squabbles and a lack of direction at board level.

So the clock is ticking, and if developing country governments don’t get enough support “they will have to turn to fossil fuels for their only response,” Figueres warns.

Still, clean energy funding and investment plans are not the only climate game in town.

Two blocks away from this interview off 2nd Avenue, UN officials were still deep in discussions over a new plan to help alleviate the world’s vast refugee crisis.

Over 65 million people are now classed as displaced by the UN, with around 21 million of those refugees from conflict, famine and other disasters.

Adopted last week, the New York Declaration for Refugees and Migrants mentions climate change, but is at its heart a reactive piece of UN politics, aiming to cope with vast flows of people.

The 22-page document forms the basis of a new set of negotiations which will likely run through 2017, perhaps culminating in 2018, offering little sense of an immediate solution or if governments see any connection between migration and extreme weather.

Making those links between the refugee crisis, the protection of natural resources and climate change was at the heart of Figueres’ brief pitch for the UN top job, which ended last month.

The votes fell for others, but she maintains the bid was worth it, if only to illustrate what she calls the “arc of consequence” and the need for a longer-term plan than the UN presently has.

“I think there is more awareness now of the fact that all these issues under the UN, starting with climate change, natural resources, human rights and migration are intertwined.

“Whatever we do on climate and other natural resources can either lead to more peace or conflict. If we don’t address them today we will be facing them in the future.

“The fact we are so unprepared to deal [with current refugee numbers] should be at best a warning that we need to prepare better… and that means we need to take care of our land.”