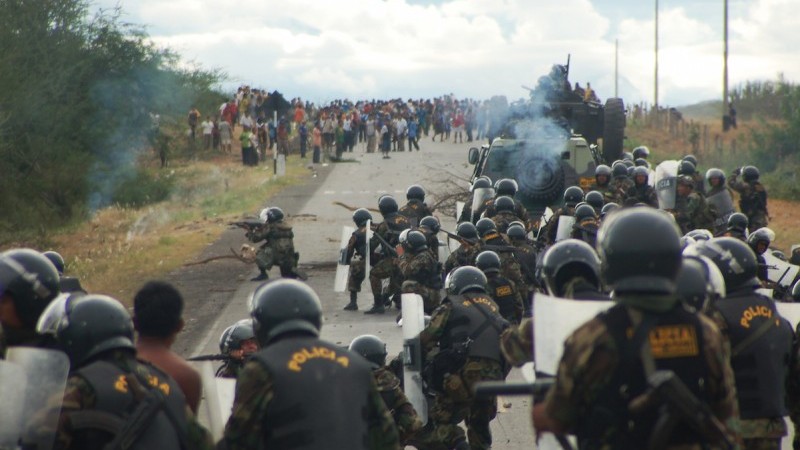 Alberto Pizango gets the first and last word in When Two Worlds Collide.

We see the indigenous leader mimic bird calls, paddle a canoe and quip about Tarzan. We see him climb out of a window to escape arrest. We see him return from exile to a crowd shouting “murderer”.

If Pizango is the hero, the villain is Alan Garcia, president of Peru at the time. In his eagerness to attract US investment, he has opened up swathes of the Amazon for oil and gas exploration. A pond gleams with crude; villagers complain of headaches and dizziness.

As a political standoff over territorial rights escalates into the “Baguazo” conflict, which leaves 23 police officers and at least 10 civilians dead, the moral high ground too is contested.

This documentary raises questions about the balance between indigenous rights, environmental protection and economic development that reverberate globally.

Directors Heidi Brandenburg and Mathew Orzel were fresh out of the University of Wales, Newport, when they started investigating in 2007.

Their interest was piqued by an article about the trade agreement under negotiation with the US, says Brandenburg, who is half-Peruvian: “The entire Peruvian Amazon was covered in oil and gas concessions… It was just kind of shocking.”

They made contact with indigenous protesters, getting to know Pizango months before the violent confrontation in 2009.

It put them at the heart of events. “When Baguazo happened, we were right in the middle of the conflict, we had exclusive access to Pizango’s story,” says Orzel. 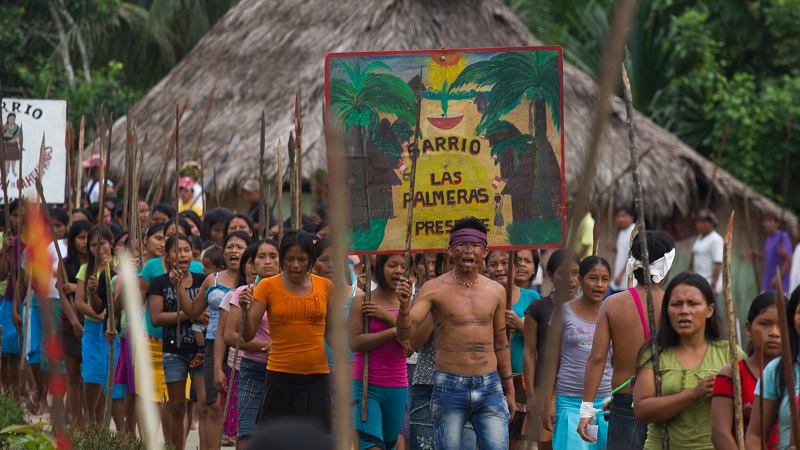 The filmmakers’ closeness to the ringleader – from the authorities’ point of view – also drew the attention of the secret service. “We were basically threatened with deportation and the potential of being classed as terrorists.”

After that, they kept a low profile as they gathered interviews with everyone up to Yehude Simon, the former prime minister who resigned over the crisis. President Garcia declined to talk.

Their relationship with Pizango notwithstanding, Brandenburg and Orzel agree their sympathies shifted in the course of making the film.

The indigenous activists have a principled argument: by UN convention, people have rights to the territory they have traditionally occupied. President Garcia rode roughshod over that, handing out concessions to private interests without so much as a by-your-leave.

As their tactics harden, blockading a critical road and pipeline, it becomes apparent public sentiment is not on their side. In a TV clip, Pizango is berated by the presenter for jeopardising Lima’s energy supply. Addressing a crowd, Garcia doubles down, saying 400,000 rainforest-dwellers should not dictate to 28 million Peruvians. The objectors are characterised as “backwards” and against development.

“We started off wanting to make a film about the indigenous people fighting for their rights, but we realised it was not just about indigenous people, it was about every Peruvian,” says Brandenburg.

The turning point for her was the funeral of Commandante Montenegro, one of the police officers killed in Bagua. His widow made a moving speech, forgiving the perpetrators and appealing for peace.

“It is not a black and white story, for sure. Ultimately, we wanted to show what was happening to the Amazon,” says Orzel.

“The question the Peruvians have is: if we can’t exploit our natural resources, how are we going to develop as a country? So the question is what are the alternatives.”

Brandenburg adds: “One of the biggest problems is that corporate law is clashing with human rights and indigenous rights. We need to start talking about how the economic system is set.”

That is a conversation producer Taira Akbar says is just beginning. The film has been on the festival circuit since January, picking up five awards along the way, and reached Lima last month.

“It was very emotional,” says Akbar of the Lima screening. “A lot of people didn’t really know the in-depth of the story, they didn’t really see the other side. They were very moved by it.”

The story continues. Pizango is facing charges of rebellion, sedition and conspiracy against the state, which could carry a lengthy prison sentence. Another 51 people are awaiting verdicts related to the killings of police in Bagua.

Meanwhile, the laws that sparked the protest have been repealed, yet people on the ground say forest clearances continue, as deals are struck on the sly.

These human struggles affect global efforts to combat climate change. The Amazon rainforest is hugely important for absorbing carbon dioxide. Peru is relying on reduced deforestation to deliver on its emissions pledge to the UN.

Akbar says: “The main thing we want people to take away is the rainforest and that is what is really at stake – and what we as citizens of the world are going to do to protect it.”