A year after four Ashéninka men were killed by illegal loggers, their community has secured rights to the territory 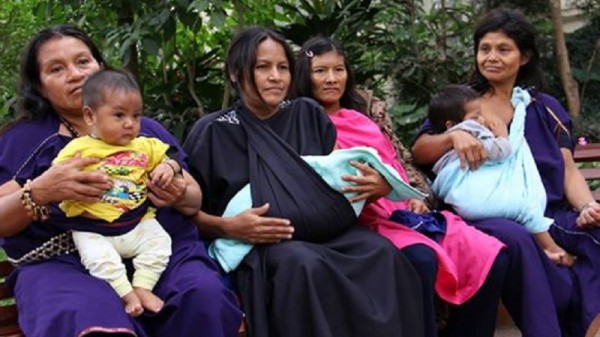 The widows of murdered forest defenders travelled to Lima to demand justice (Facebook/If not us then who?)

The Asheninka people have been campaigning for land rights to their ancestral homelands in the Peruvian Amazon for more than a decade.

Their case shot to the world’s attention last September, when four of their number were killed, allegedly by illegal loggers: Edwin Chota, Jorge Ríos Pérez, Leoncio Quinticima and Francisco Pinedo.

The men’s widows took the fight to Peru’s capital Lima, while it was hosting the last round of UN climate talks.

With the media spotlight on, they accused the government of failing to support their efforts to protect the rainforest – a crucial part of the climate agenda.

Diana Rios, daughter of Jorge Ríos Pérez, was triumphant: “They thought they could treat us badly forever. But no! We are human beings!

Indeed, more than 1,600 communities have outstanding claims, according to indigenous rights network Aidesep.

Hailing the “great success” for the Asheninka, Tom Bewick of Rainforest Foundation US, added: “We hope this action will push the State to recognize the land rights of all indigenous communities in Peru.”

Many of these ethnic minority groups live in remote parts of the rainforest, where tree-cutting outlaws threaten their way of life.

For Chota, land rights were essential to confront the armed loggers who pillaged with impunity, days’ travel from the nearest enforcement outpost.

“As long as we don’t have title, the loggers don’t respect native ownership,” he told National Geographic in the year before his murder. “They threaten us. They intimidate. They have the guns.”

Up to 80% of Peru’s timber exports are harvested illegally, according to a 2012 World Bank report.

It is a major driver of climate change, with deforestation responsible for some 40% of Peru’s greenhouse gas emissions.

Across the Amazon, researchers have calculated a third of the carbon stored in trees sits in indigenous territories.

Legal rights helped to defend those areas from commercial pressures to clear space for agriculture, hydropower generation or extractive sectors, they argued.

The government put deforestation front and centre of a draft climate pledge in June, with policies including land rights for indigenous people.

But critics questioned whether Lima would see the strategy through.

Andrew Miller, campaigner at Amazon Watch, told RTCC the authorities had weakened environmental and human rights protections under the guise of encouraging investment.

“The titling of Saweto is one small step in the right direction, but it doesn’t bode well for other communities that this required years of effort, the assassination of four leaders, and an international outcry to finally happen,” he said.

“Expanding indigenous land recognition is not expensive, but the political will is often lacking in favor of extractive industries like oil and mining.”