Crib notes: will China’s G20 deliver for the climate? 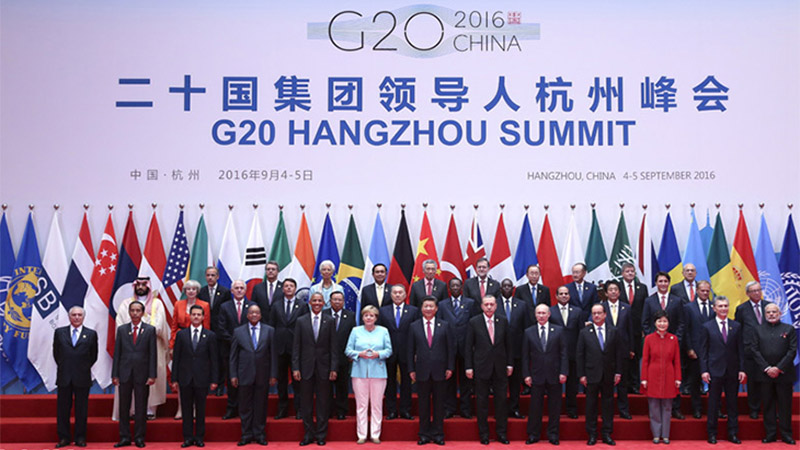 “I have said for many times that green mountains and clear water are as good as mountains of gold and silver.”

So said China’s president Xi Jinping in his opening address to the G20 meeting in Hangzhou on Sunday. He talked up domestic carbon targets and plans to cut a billion tonnes of coal production capacity in three to five years.

Unlike, say, the South China Sea or the proper way to arrive at an airport, it is something the US fully agrees on. At least under president Barack Obama, that is.

Continuing their hugely influential partnership on climate issues, the two leaders have formally joined the Paris Agreement in tandem.

The paperwork from the world’s two biggest emitters makes it all but certain the pact will come into force this year, say climate watchers. That provides a modicum of insurance against Donald Trump sabotaging the whole thing, just as a Reuters/IPSOS poll shows him drawing level with US presidential rival Hillary Clinton.

In case you missed it, Ed King has this primer on the next steps for climate diplomacy.

The G20 has repeatedly agreed to phase out “inefficient fossil fuel subsidies”, but has been vague on when and how. Could this be the summit countries finally agree on a deadline? In June the G7 agreed on 2025.

More tangibly, officials from the US and China are due to submit peer reviews of each other’s support for coal, oil and gas. As flagged up by China Dialogue in May, this novel approach could unlock progress in a tough area of policy.

While the Paris Agreement is being fast-tracked, it looks like a climate deal for the aviation sector will start slowly.

Three weeks before the decisive summit kicks off in Montreal, a document released by the International Civil Aviation Organization shows a proposed carbon offsetting scheme will be voluntary for the first six years.

It is not until 2027 that airlines will have to buy credits to neutralise emissions growth – and even then many small and poor countries will be exempt.

If the air travel sector is worried going carbon neutral will be costly, they need only look to the EU emissions trading scheme for reassurance.

Permits on the world’s longest-running carbon market are trading at less than €4 a tonne of CO2 – a three-year low.

That is worrying for the EU’s flagship climate policy, warns Phil MacDonald, analyst at think tank Sandbag, which is pushing for reforms.

“Investments in the transition to clean energy and clean industry will not be made on the back of a carbon price cheaper than a Belgian beer,” says MacDonald.

A delicious glass of Belgian beer, now more expensive than polluting a tonne of CO2 on the EU carbon market 😢 #EUETS pic.twitter.com/guNHYKje9K