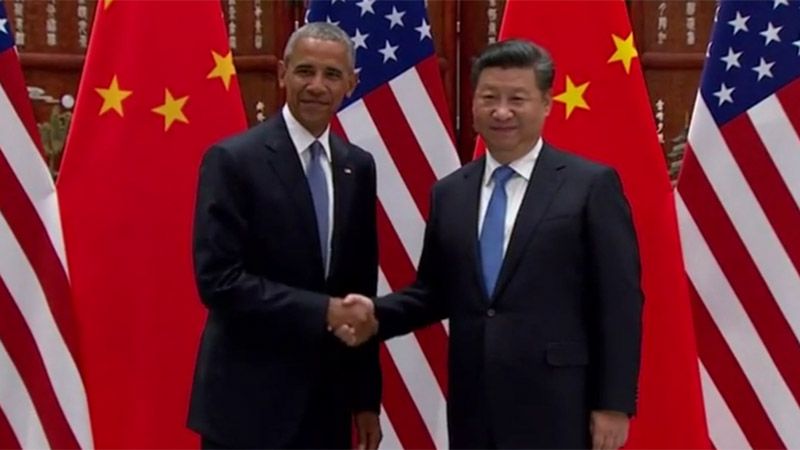 US secretary of state John Kerry:
“To prevent the worst impacts of climate change from happening, it is essential for the Paris Agreement to enter into force as quickly as possible. Both the United States and China strongly urge others to join the Agreement as soon as they are able, in hopes of meeting UN Secretary General Ban Ki-moon’s goal of bringing it into force this year. The urgency of this challenge is clear, and it is critical that global efforts move forward without delay.”

Restoring hope, strengthening multilateralism. Making the impossible not only possible but irreversible. Thx to all! https://t.co/kVwxruVU3F

Alden Meyer, director of strategy and policy at the Union of Concerned Scientists:
“Today’s announcement, coupled with other key countries signaling intentions to take similar action, all but assures the Paris Agreement will take effect this year. Logistically, negotiations on the agreement’s detailed rules will likely take another year or two to finalize.”

By moving together to swiftly ratify the Paris Agreement, the United States & China are setting the pace for the rest of world to join (1/3)

Mattlan Zackhras, Minister-in-Assistance to the President of the Republic of the Marshall Islands:
“Today’s announcement is the strongest signal yet that what we agreed in Paris, will soon be the law of the land. With the two biggest emitters ready to lead, the transition to a low-emissions, climate-resilient global economy is now irreversible.
It’s critical we now see the other big emitters quickly follow-suit and clarify their own plans to help bring the Paris Agreement into force this year.”

Thoriq Ibrahim, Min. of Environment and Energy for the Maldives and Chair of the Alliance of Small Island States:
“We welcome the news and call on all countries to not only to follow suit, but also to accelerate the deployment of climate solutions and make improvements year after year. The current commitments under the Paris Agreement are not sufficient to do what is necessary, but it demonstrates that the entire international community has joined together to tackle our generation’s most pressing challenge. Success depends on nothing less.”

Michael Jacobs, Senior Advisor, New Climate Economy
“The world’s two largest emitters have joined the Paris Agreement not out of charity or altruism but because it makes economic sense for both of them. The Paris Agreement doesn’t just offer the possibility of a safer world for future generations. It promises new jobs and industries in the low carbon economy. With China and the US on board, we can expect the rest of the world to follow, and bring this vital agreement into force as early as possible.”

Andrew Steer, President & CEO, World Resources Institute:
“Cooperation between the U.S. and China on climate change, once unimaginable, now stands as the brightest spot in their relationship. In joining the Paris Agreement in tandem, these two leaders have reconfirmed their responsibility to lead by example. The two countries are also united in pushing for progress on multiple fronts, including around HFCs and aviation emissions, that will enable even greater leaps forward. Coming just before the G20 summit in China, these announcements reflect that smart climate action goes hand-in-hand with future economic stability and growth. Their actions open the way for an enduring legacy on climate change that will leave the world better for today’s children and future generations.”

Hillary will deliver on Paris & go further to cut emissions, build renewable energy to power every home in America. https://t.co/pbSfCG6md3

Jennifer Morgan Executive Director of Greenpeace International:
“The world finally has a global climate agreement with both the U.S. and China as formal Parties. This signals a new era in global efforts to address climate change. Both countries now need to scale and speed up their efforts in charting a future that avoids the worst impacts of climate change.”

Mohamed Adow, Christian Aid’s Senior Climate Advisor:
“This marks the moment the two biggest economies throw their weight behind the Paris Agreement. It means the deal, agreed less than nine months ago, will now likely have the full force of law before the end of the year. This choreographed announcement shows that the US and China are still working together collaboratively to address climate change. And it shows how far we’ve come from the days when they were both at the back of the class, dragging their heels.”

With US/China 26 countries, 39% of emissions. We do need 55/55. Close to entry in force of Paris Agreement. Historic pic.twitter.com/9RYYsDoYVs